The global exploration and production (E&P) sector is on pace for major underinvestment through 2020, as companies use cash flows to shore up their balance sheets, according to a report released Wednesday by Deloitte LLP. 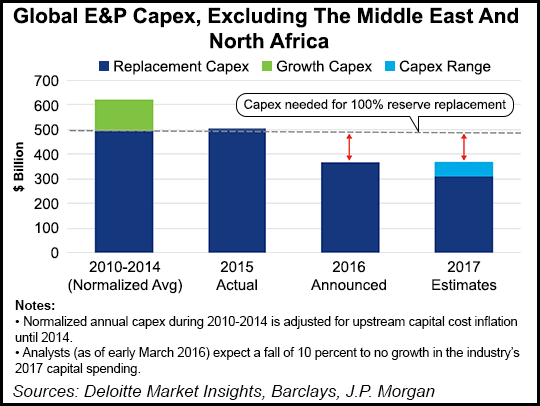 “It takes significant capital for the industry to just remain flat. Actual and announced capex cuts suggest that even remaining flat could be a challenge for the industry, let alone meeting any expected growth,” said John England, Deloitte’s U.S. and Americas oil and gas leader and an author of the report. “Although oil prices have recovered to about $50/bbl, the industry’s capex cycle will take time to stabilize and recover. Even in a weak demand and reduced costs outlook, we estimate the global upstream industry will need to spend a minimum capex of about $3 trillion during 2016-2020 to ensure its long-term sustainability.”

According to the report, “despite record investments” over the last decade, “major resource-seeking oil and gas companies were able to replace only 125% of their production” and saw their share of proved developed reserves drop from 62% to 58%.

“Since the industry’s replacement capex is about 80% of total spending, then broadly speaking, the industry could reduce its overall capex by a maximum of 20% to remain flat,” Deloitte said. “After making capex cuts of 25% in 2015, E&P companies have announced further capex cuts of 27% in 2016 and expect a flat 2017, taking future spending far below” reserve replacement capex.

To meet replacement capex through 2020, the industry would need to spend about $600 billion a year, or 40% above expected 2016 spending, according to the report. Through 2020, about $1.4 billion will be needed in oil capex after factoring in slowing demand, excess inventories and high decline rates. For gas, companies will need to invest about $1.6 billion through 2020 on account of a higher demand growth outlook.

The global gas reserves life is already at a 25-year low, falling by 10 years since around 2000, Deloitte said. Factor in “unmet demand potential in Asia Pacific” and the industry will likely need to maintain its current reserves level “at a minimum.”

Debt repayments and shareholder payouts will compete with capex for E&Ps still feeling the effects of the downturn, according to Deloitte. With worldwide listed entities owing $590 billion in maturing debt and $600 billion in payouts, “this takes total cash outflows to about $4 trillion for 2016-2020” in a low case spending scenario.

“Such huge outflows raise a question as to whether there will be enough cash flows in the system. If operating cash flows of the industry in 2015 are annualized for the next five years” at $55/bbl, “we see a gap of up to $2 trillion,” Deloitte said.

“Capex on a standalone basis has a minimum gap of about $750 billion if no debt repayments or investor payouts occur. But, it will not likely have first call on a company’s cash flow, as a focus on balance sheets and maintaining the already reduced payouts may get higher priority, at least in the initial few years.”

But a price recovery may not close this cash flow gap, as oilfield services (OFS) costs rise with the price of crude oil, according to the report.

After “significant cuts” to OFS companies’ “expansion plans and workforce strength” during the downturn, “there is a high possibility of cost inflation beating price recovery in the future. Rebuilding the supply chain will not be fast and cheap,” Deloitte said. A price recovery could even “widen the gap, as capex requirements may rise faster than cash flows.”

If E&Ps prioritize developing reserves over exploration, they could end up strengthening short-term cash flows at the expense of long-term sustainability, while a reduction in development spend could reduce spare capacity and expose the market to risk from black swan events, Deloitte said. Meanwhile, cutting capex would further increase reliance on the Organization of the Petroleum Exporting Countries and heavy oil, according to the report.

The E&P sector will need to prepare “for a capital-constrained future,” Deloitte said, requiring proactive debt and risk management.

U.S. shale plays will serve an important role. “Although oil and gas production from U.S. shales is 5% below its peak level, its merits in terms of short production and cash flow lags, and the ever-growing scope for companies to optimize operations through open learning, make shales all the more important and attractive,” according to the report. “This resource has the closest correspondence between investment and production, which is the need of the hour from cash’s point of view.”

The oil majors will also need to play a bigger role by “finding more to cut from operation costs than capital spending; by sharpening their core competency of planning, delivering and starting projects on time and on budget; by upholding their relationship with governments and suppliers; and by seizing new resource-access opportunities,” Deloitte said.