Dealmaking in the United States within the upstream oil and gas sector staged a slight recovery in the second quarter, with three of five deals in Appalachia, but the period still ranks as the third lowest in quarterly value since 2009, according to Enverus. 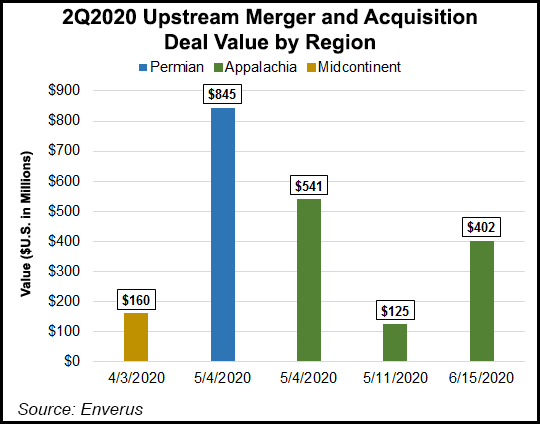 The data analytics company in its summary of 2Q2020 U.S. upstream merger and acquisition (M&A) activity showed dealmaking recovered to $2.6 billion from $770 million in 1Q2020.

The largest deal in the second quarter targeted the Permian Midland sub-basin, with special purpose entity Pure Acquisition Corp. offering an estimated $845 million in stock to tie up with subsidiary HighPeak Energy Inc. Under the agreement, a HighPeak subsidiary is merging into Pure, with Pure surviving as a subsidiary. Pure’s existing stockholders are to receive one share of HighPeak common stock for each share of their common stock.

Once combined, HighPeak, trading on Nasdaq under “HPK,” would continue as an independent, with most of its 51,000 net assets primarily in West Texas in Howard County.
“With the decline of energy prices over the last few months, several energy companies are struggling,” HighPeak CEO Jack Hightower said. “However, due to our low drilling and completion costs and our low operating costs, our breakeven prices are much lower than our competitors which enables us to operate profitably at lower price levels.”

Enverus noted that Pure’s combination with HighPeak “was the second iteration of a deal initially announced in late 2019 and then restructured after oil prices declined sharply.”
Beyond the Permian acquisition, three of the top five M&A transactions in 2Q2020 centered on natural gas-heavy Appalachia.

National Fuel Gas Co. in May agreed to pay $541 million for Royal Dutch Shell plc’s upstream and midstream portfolio in Pennsylvania. In the third biggest deal for the quarter, Sixth Street Partners LLC agreed to pay $402 million for some of Antero Resources Corp.’s Appalachian properties.

In January, BCE-Mach III made what Enverus said was a $160 million deal to snap up substantially all of the upstream assets of bankrupt Alta Mesa Resources Inc., giving it a bevy of assets in the Midcontinent. The fifth-best deal was said to be by Diversified Gas and Oil plc, which agreed to pay $125 million for some of EQT Corp.’s Appalachia assets.

Overall, natural gas deals increased their share of M&A to 30% year-to-date from 5% in 2019, Enverus noted.

“Relatively strong future pricing is likely driving demand for gas assets,” said Dittmar. “While the spot market for natural gas is still suffering from low prices, the future curve 12 or 24 months out is significantly higher. That is permitting buyers to hedge future production at levels that support deal economics.”

The Antero sale, according to Enverus, “also checked the box on one of 2020’s other relatively positive stories, royalty and mineral deals. After a strong showing in the second half of 2019, royalty deals accounted for more than 20% of the second quarter’s total value.”

Institutional capital was the buyer of the top royalty deals in the quarter, Enverus noted, including the transaction by Sixth Street, as well as a $100 million acquisition by EnCap-sponsored Pegasus Resources in the Permian.

The analysts firm said another byproduct of the “uncertain market” is using contingency payments, mostly linked to commodity prices, to distribute the risks between buyers and sellers and help overcome a wide bid-ask spread.

“Most of the largest deals in the quarter, including the National Fuel Gas acquisition, plus a pair of Appalachian asset deals by Diversified Gas & Oil, included a contingent payment portion linked to prices,” analysts said. “The Antero deal linked its contingent payment to volume thresholds along with including a reversion in interests once certain return thresholds are reached for the buyer.”

The downturn in the M&A market is linked to an increasing number of bankruptcies too, Enverus noted, including by onshore pioneer Chesapeake Energy Corp. Recent filings, said analysts, “especially among private companies, appear to be resulting in more proposed 363 sales relative to past downturns…

“The rise in proposed sales may indicate fewer debtholders are willing to work a restructuring deal to take equity and would prefer an exit, even if that involves a sale into a challenging market.”
Through the rest of 2020, natural gas assets may continue to lead in M&A dealmaking, “as long as future pricing supports deals,” possibly extending to other areas of low-cost gas supply areas such as the Haynesville Shale.

“However, the market for assets in major oil shale plays, which were the key driver of M&A values for quite a few years, is likely to remain challenged barring a rally in crude prices,” said analysts.

“Public companies of all sizes are facing significant financial headwinds, making it difficult to convince skeptical investors on the value of M&A. In the past, private equity has deployed opportunistically in these types of markets but is currently facing its own struggles. Eventually, a fresh infusion of capital from either public, institutional, private investors, or international markets will likely be needed to restart oil-focused deals.”