Denver-based Liberty Oilfield Services Inc. proved the contrarian during the third quarter, and it appeared to pay off, as it acquired a top-tier pressure pumping business, gained entry into the gassy Haynesville Shale, and un-furloughed all of the employees who were sent home last spring in anticipation of brighter days ahead. 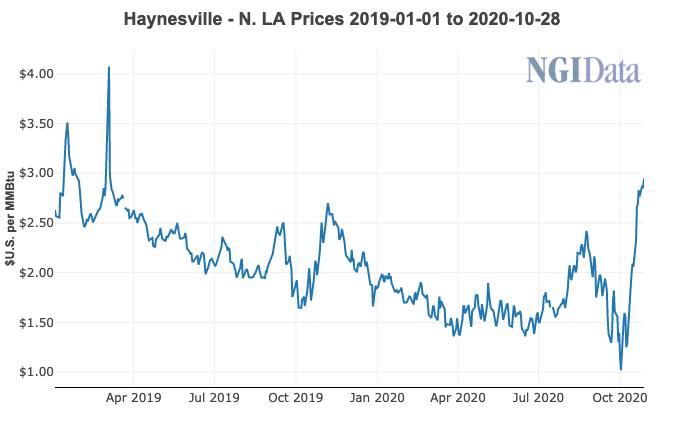 “As our industry emerges from the depths of the downturn, our third quarter results showcase an endorsement from our customers of our high-quality service and technology offerings,” Wright said. “Our business expanded with top tier customers during the third quarter, and we entered a major gas basin, the Haynesville Shale, with an existing customer. “

He acknowledged it has not been an easy year. Exploration and production (E&P) customers served by the company “have been challenged by current conditions as we have been,” he said. “We are in this battle together,” and “our personal lives, relationships are strengthened or broken during trying times. Liberty is growing and strengthening our relationships with our customers, and our third quarter results reflect that.”

The completions specialist also expanded its market share in September after clinching a deal to take over Schlumberger Ltd.’s massive fracking business, OneStim. Liberty traded a 37% stake in the company to acquire more pressure pumping, pump down perforating and fracture sand assets across the Lower 48 and onshore Canada.

“Despite near-term macro volatility, we never take our eyes off the long-term goal of building a competitively advantaged leader in North American frack,” Wright said. “Our strategic goals have always been centered on building a business for longevity and returns through cycles, which requires a strong balance sheet and solid liquidity.”

Technology was the major driver behind the OneStim transaction, which has received antitrust clearance and is set to be completed by year’s end.

“The reservoir is big, so the pounds per foot of frack intensity is high in the Haynesville,” with estimated ultimate recoveries are “highly dependent upon frack intensity.”

The formation, which straddles East Texas and northern Louisiana, has “a number of sizable private operators, public E&Ps, but boy, the resource base and the outlook for it going forward is tremendous.

“We’ve been looking at Haynesville for a while. We like the outlook there…We will be very busy next year.”

OneStim already had a “significant presence there, and it’s been doing some great work…I see the Haynesville…going on for a long, long time.”

Liberty up to this year had focused in oily plays, but it was time to move into gas, he said, as U.S. liquefied natural gas exports are climbing, with “a fair amount of room to run, and growing pipeline capacity to Mexico.”

Liberty had spare frack capacity because of the downturn, so management decided to put it to good use. Having a “specific customer” with a solid Haynesville portfolio also made the case that it was time to expand into gas.

Meanwhile, E&P customers across North America are slowly getting back to work, for now at least.

“The frack activity rebound has continued at a modest pace, likely supplemented at Liberty by gains in market share,” Wright said. “We exited the third quarter at a much higher level of activity than the quarter began. We see activity now leveling off until the seasonal decline towards the end of the fourth quarter, which we expect to be more modest this year.”

In the final three months, “we are now anticipating average active frack fleets excluding the acquisition of OneStim, will increase by greater than 20% from the third quarter.” In light of the pickup, Liberty also has brought back people who were laid off earlier this year. “We no longer have any employees on furlough,” Wright said.

The company is “on the road to recovery,” but it’s going to take time. “Oil prices are bouncing around $40, an improvement from the spring, but still too low for a healthy industry. Natural gas prices are at a somewhat better place today than oil prices. The U.S. onshore rig count bottomed about three months after the active spread count bottomed and has also been modestly improving with six consecutive weeks of growth.”

Industry activity levels are around 130 active frack fleets, which are “well below the level of activity to hold U.S. oil and gas production flat. Hence, we expect to see further increases in activity levels next year. Liberty is responding to the reality that we have today, and building our competitive advantages for however the future unfolds. Customer relationships are central to this.”

Liberty’s customers are looking to the company for ideas and more innovation to lower the cost of producing oil and gas, Wright said. Environmental, social and governance (ESG) issues “also are a growing part of our customer dialogues…We are anxious to bring a fresh candid perspective to this growing issue in our industry.”

CFO Michael Stock during the conference call said there were “month-to-month improvements” into the third quarter following the trough in frack activity in the second quarter. “We are now expecting greater than 20% sequential growth in average active fleets, which is…higher than our prior guidance of 10-12 fleets.”

Capital expenditures were $12 million in 3Q2020, with fourth quarter spending primarily related to maintenance on increased working fleets and investments in new equipment.

“The exceptional circumstances of this historic downturn in oil and gas have been bittersweet,” Stock said. “We had to react swiftly when circumstances were highly volatile by reducing staff, conserving cash, managing our liquidity and maintaining a strong balance sheet. Our core principles allowed us to navigate a very challenging market.

“Equally important, it also allowed us to take advantage of opportunities that will make us stronger as the cycle improves. The acquisition of OneStim is a prime example of executing for the future. We believe OneStim will serve as a catalyst to advance our goals in generating superior returns as we have in years past.”

The timing of full recovery in global oil demand “remains uncertain,” but “the last several months have shown a dramatic rebound from the lows in April and May. However, a resurgence in Covid cases now threatens the future pace of recovery in oil demand.

“Against this backdrop, there has been a concerted effort across the industry to cut costs and drive efficiency improvements. As part of that effort, we’ve seen several significant consolidations” by exploration and production customers.

“And we expect more to come. These trends will likely persist into 2021 across the oil and gas industry,” with the larger operators able to rebound more quickly.

With the presidential election in days, Wright was asked if Liberty was undertaking any “contingency planning” in the event Democrat Joseph R. Biden Jr. were to defeat President Trump. The Democrat has suggested that if he were to be elected, he may push to drop oil subsidies and ban new unconventional drilling on federal lands.

Having a permit in hand would protect the leasehold from future regulation. In any case, however, Wright said moves to restrict drilling would not “change demand or consumption of oil and gas at all. It just moves where it’s produced…in the U.S. to somewhere else.”

“Look at New Mexico,” Wright said. The state “rolled out the first free college tuition for everyone. What’s funding that? Oil and gas royalties are dominantly on federal lands, so we don’t know what’s going to happen…Our industry, at least in the near-term, will not be not be as impacted as much by the election as most people think and emotions are running around.”