Weather from October to February east of the Rocky Mountains was significantly colder than last winter — and colder than the average for the past 10 years — and the resulting surge in natural gas consumption will drive working inventories at the end of March down to 965 Bcf, according to the Energy Information Administration (EIA). But don’t expect higher natural gas prices, the agency said. 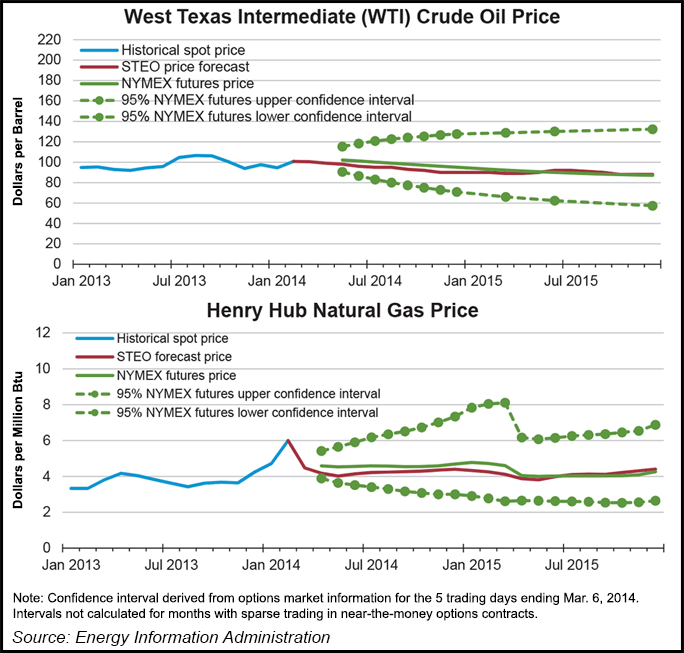 It would be the first time a winter has ended with storage below 1 Tcf since 2003, EIA said, and signals what could be a record build during the upcoming injection season.

“Much colder-than-normal temperatures in February led to large stock withdrawals in response to high demand from the residential, commercial and electric power sectors,” the agency said in its latest Short-Term Energy Outlook(STEO). Three of the top five months for total natural gas demand over the last eight years were December 2013 and January and February of this year, according to Bentek Energy data.

“The stage is now set for a record stock build over the injection season,” EIA said. “Projected end-of-October inventories total 3,469 Bcf, a build of almost 2,500 Bcf.” The March spot price will average $4.48/MMBtu “and will continue to decline in the spring,” with Henry Hub gas prices averaging $4.44/MMBtu this year and $4.14/MMBtu in 2015, EIA forecast. Those price forecasts are up significantly from EIA’s previous STEO, in which the agency said it expected Henry Hub prices to averaged $4.17/MMBtu in 2014 and $4.11/MMBtu in 2015.

“This month’s STEO raises the outlook for natural gas prices, which will spur additional production,” EIA said. “Expectations for lower demand from the electric power sector compared with the past several years should help enable a record-high stock build.”

Marketed natural gas production is expected to grow at an average rate or 2.5% in 2014 and 1.1% in 2015. “Rapid natural gas production growth in the Marcellus formation is causing natural gas forward prices in the Northeast to fall even with or below Henry Hub prices outside of peak-demand winter months,” EIA said. “Consequently, some drilling activity may move away from the Marcellus back to Gulf Coast plays such as the Haynesville and Barnett, where prices are closer to the Henry Hub spot price.”

The increasing precision and efficiency of horizontal drilling and hydraulic fracturing is boosting yields of oil in the Bakken, Eagle Ford and Niobrara, and natural gas in the Marcellus and Haynesville, the agency said.

Growing domestic production over the past several years has displaced some pipeline imports from Canada, and exports to Mexico have increased over the same period, trends EIA expects will continue through 2015. EIA projects net imports of 3.6 Bcf/d this year and 2.6 Bcf/d next year, which would be the lowest level since 1987. Over the longer term, EIA projects that the United States will be a net exporter of natural gas beginning in 2018.