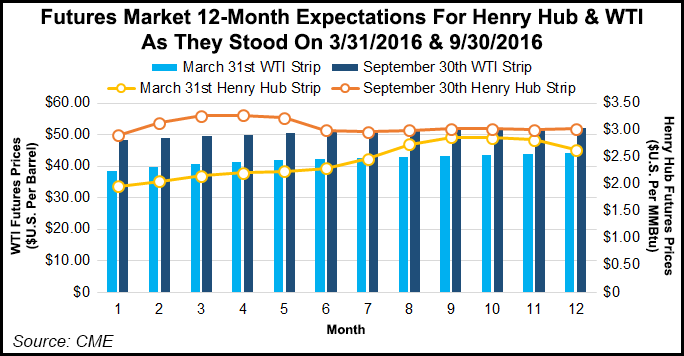 “I think we’re seeing that bankers and other lenders may view prospects with more optimism that the market is likely to rise,” said Houston Partner Jeff Nichols, who leads the firm’s energy finance practice group. “I think it is an indication that borrowers are watching the price of their reserves remaining flat and are trying to be more realistic in their expectations.”

Of the 150 who responded to the survey, 41% described themselves as oil and gas lenders, including PE firms, while nearly one-quarter (26%) were E&Ps (borrowers) and about 22% were professional service providers.

The latest survey may “reflect a continued belief within the industry that restructuring or bankruptcy may still be the answer for a number of producers dealing with drops in their borrowing bases,” energy practice Chairman Buddy Clark said. “The percentage is two times the percent predicted a year ago but is basically unchanged from this spring’s survey.”

Haynes and Boone’s fall survey found that on average, 41% of the E&Ps expect to see borrowing base redeterminations decline, which is better than the spring survey, when an average of 79% were anticipating a decline in E&P borrowing levels. Spring redeterminations ended up being more lenient than many E&Ps had expected (see Shale Daily, April 11).

The spring and fall redeterminations are “largely reserves-based lending, and while pricing may not be going gangbusters, crude and natural gas prices are somewhat better than what they were during the last round of redeterminations this past spring,” said NGI‘s Patrick Rau, director of strategy and research. “That should mean the value of reserves using the U.S. Securities and Exchange Commission formula should be no lower than they were last time around.

“The key, however, is what forward price decks will the various banks use this cycle? Things are somewhat better than they were last spring, so while I don’t think banks are going to go hog wild and greatly expand their clients’ borrowing bases, I don’t envision a widespread case of banks lowering those, either.

“Said differently, many E&P companies still have liquidity problems, but I wouldn’t expect lower revolver availability to add to that this fall,” Rau said.

Haynes and Boone’s fall survey also found that traditional banks aren’t seen as the major capital providers in the next year. Instead, 57% of those surveyed said they expect private equity (PE) firms and high-yield private debt entities to take the biggest roles. Only 14% said traditional banks were expected to be one of the top two sources of capital going forward.

Because the survey is “forward looking,” it provides clarity for those assessing the current financial climate in the oil and gas industry, Clark said.

According to Haynes and Boone, this year through Sept. 7, 58 producers had filed for Chapter 11 bankruptcy protection, representing $50.4 billion in cumulative secured and unsecured debt.

“Despite the recent uptick in oil prices, all indications suggest more producer bankruptcy filings will occur during 2016,” the firm said.

Between July 2015 and Sept. 14, there also had been 13 U.S. midstream companies that have filed for protection, which “involved about $17.2 billion in cumulative secured and unsecured debt (including debt of related affiliates),” Haynes and Boone said.