As the deadline nears for a governor’s task force to make legislative recommendations for Colorado’s oil/natural gas local control issues, the prospects for solutions look as dim as ever. 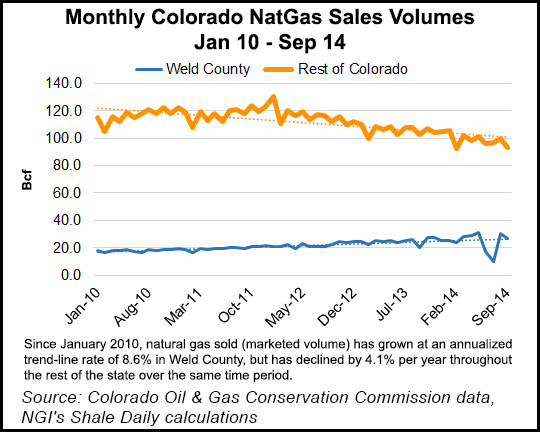 The 21-member task force appointed last summer by Gov. John Hickenlooper (see Shale Daily, Sept. 9, 2014) managed to avoid dueling statewide ballot initiatives in November, but based on nearly a dozen meetings over the past months, the panel of local government, industry, community, business and environmental representatives is not seen anywhere close to a clear majority for any legislative proposals.

Dialogue among the task force members, input from various community representatives and observations by third parties all indicate a serious lack of consensus as the group heads into its final two meetings (Feb. 2 and Feb. 3) in Denver and its obligatory final session Feb. 28 to present recommendations to Hickenlooper.

The only consensus is that task force members need to “come up with something,” a knowledgeable source in the Colorado oil/gas industry told NGI‘s Shale Daily on Thursday. Meanwhile, the head of the state chapter of the National Association of Royalty Owners (NARO), Neil Ray, said he doesn’t see that the task force has accomplished anything.

From a mineral owners’ perspective, Ray is hoping that eventually the state legislature will limit local control to surface issues and prohibit any attempts to have local jurisdictions decide “down-hole” issues relating to the exploration and production of oil and gas.

Two Colorado state lawmakers have proposed bills to force local governments that impose drilling bans to pay mineral rights owners for their lost royalties (see Shale Daily, Jan. 21). And Ray said in Boulder County, where elected commissioners extended a drilling ban for another four and a half years, mineral owners are taxed by the county even though they can’t drill because of the ban.

Ray contends that in Boulder County alone there are 57 sections, or about 32,480 acres, with proven oil/gas reserves that can’t be touched because of the ban.

An industry source who is skeptical about prospects that the task force will make any meaningful recommendations said the governor’s executive order forming the panel required a two-thirds majority to pass recommendations.

“Will they be able to do that? Probably not,” the source said. But he task force might change the rules to allow a simple majority to approve some recommendations.

“I believe they need to begin getting recommendations formulated later this month, and they are supposed to bounce them off a third-party firm that has been helping run the task force meetings,” the source said, adding that this early recommendation phase may be done privately and not in the remaining two public meetings.

Even if some recommendations are passed along to the governor and eventually the legislature, skeptics don’t think they will be strong enough to satisfy state lawmakers, and the state will again face the prospect of a statewide ballot referendum battle in 2016.

The task force’s last two meetings, in Greeley in Weld County, in which 40% of the state’s active wells are located, exposed a rift between members — particularly industry-related people — not wanting to give local communities veto authority over future oil/gas development and others, including elected officials, wanting the communities to have a bigger voice.

“I don’t think anything will come out of the task force that is going to appease the people who want to either ban fracking or place setback requirements that are so large they become a de facto ban on drilling,” said a member of one of the major oil/gas organizations.

A further observation on the political landscape is the fact that Hickenlooper managed to eliminate the local control issue from the ballot in the last election cycle, during which he won a narrow re-election campaign. At the same time, the state Senate changed to a Republican majority, while there remains a Democratic majority in the House.

An industry insider in Denver told NGI’s Shale Daily that the new majority in the state Senate means no anti-oil/gas legislation will be passed by the legislature this year.

Since January 2010, marketed volume of natural gas in Weld County has grown at an annualized trend-line rate of 8.6% but has declined by 4.1% per year throughout the rest of the state.