Recently announced rollbacks of Obama-era methane controls for the oil and gas industry appear destined for a legal and political onslaught, particularly if Joseph R. Biden Jr. is elected president. 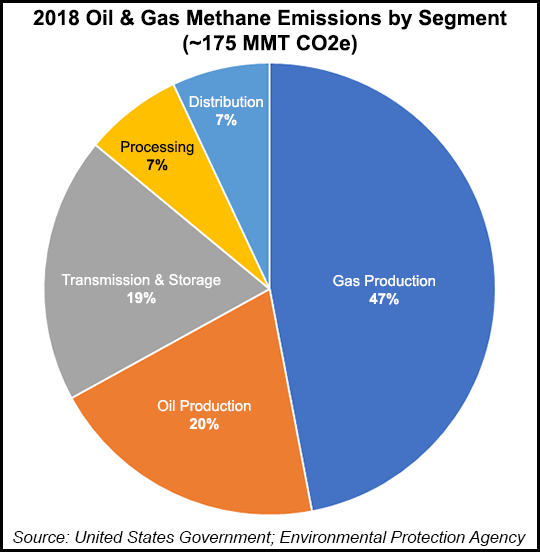 The NSPS sought to reduce emissions of the potent greenhouse gas methane, as well as smog-forming volatile organic compounds (VOC) and toxic air pollutants such as benzene from oil and gas operations.

“The Trump administration’s attempt to eliminate these sensible methane standards is fundamentally flawed,” said Environmental Defense Fund (EDF) President Fred Krupp. “Like so many other administration rollbacks that have already been rejected by the courts, this one ignores the science, the public health impacts and the low-cost solutions we have at hand…

“The administration has no scientific or public health basis for taking this action, and EDF will forcefully oppose it in court.”

Krupp said the new rules would allow an estimated additional 4.5 million metric tons/year (mmty) of methane pollution into the atmosphere, with the climate warming potential on a 20-year basis of nearly 400 mmty of carbon dioxide, equal to the annual emissions of about 100 coal-fired power plants.

Global warming solutions advocate Emma Pabst, with the non-profit Environment Texas, called the new rules “unconscionable,” highlighting that about one-third of the country’s methane pollution is from oil and gas operations, with a large share traced to the Permian Basin of West Texas and southeastern New Mexico.

The Sierra Club said the new rules would strip away methane limits from the industry altogether, and “leave gas transmission and storage equipment entirely uncontrolled under a key Clean Air Act program.”

Climate change has assumed a more prominent role this election cycle than in the past, as evidenced by presumptive Democratic presidential nominee Joseph R. Biden Jr.’s recently announced plan to fight climate change, which would be by far the most ambitious of any president in history.

With or without regulatory oversight, many global E&Ps, including in the United States, are reducing their carbon emissions, pushed not only by stakeholders, but on ambitions to reduce their net carbon emissions. In addition, states such as New Mexico and Colorado also have moved to tighten restrictions on methane emissions from the energy sector.

In a note to clients on Thursday, analysts at Clearview Energy Partners LLC said, “the timing of [the] final rules makes them highly election sensitive…” If Biden were to win the White House and Democrats take the Senate, “the rules could be vulnerable to reversal via the Congressional Review Act.”

Another option would be for a Biden administration to abandon a legal defense of the rollbacks and remand the rules back to the EPA, the Clearview team said. Analysts said “if Biden wins…a methane proposal looks like it could be a ‘first-100-days’ objective.”

EPA dubbed part one of the overhaul the “policy package.” It lifts emissions standards for the transmission and storage segments of the industry, and it removes methane control requirements for the production and processing segments.

The new rules also have highlighted a growing gulf between European supermajors such as BP plc and Royal Dutch Shell plc, and U.S. independents on the appropriate steps for the industry to address climate change.

BP America President David Lawler said Thursday the company “believes methane should be directly regulated by the EPA and respectfully disagrees with today’s decision by the administration. Direct federal regulation of methane emissions is essential to preventing leaks throughout the industry and protecting the environment.”

He added that while BP has committed to halving its methane intensity and reaching net-zero carbon emissions by 2050, “these are all voluntary actions on our part and, while others are similarly engaged, not everyone is.”

During a speech the same day in Pittsburgh, in the heart of Pennsylvania’s shale gas patch, EPA Administrator Andrew R. Wheeler said it is “vitally important to remember that it was the small exploration companies, not the multinational corporations, that made the breakthroughs here in the Marcellus Shale.”

The U.S. energy industry and its allies were quick to praise the new rules, which come at a time of extreme regulatory and financial headwinds for domestic operators.

“We support this revision as it is consistent with the requirements of the Clean Air Act,” said the American Petroleum Institute (API). “Our industry continues to drive down methane emissions from operations while meeting America’s energy needs every day. Under these modified rules, operators will still be required to control emissions, and the industry continues to make progress in reducing methane emissions through new technologies.”

The Texas Independent Producers and Royalty Owners Association (TIPRO) lauded the EPA “for adopting reasonable air standards that will protect the environment while also reducing regulatory burdens threatening to stifle domestic energy production.” TIPRO called the previous NSPS “among the most overreaching regulations targeting the U.S. oil and natural gas industry to be promulgated under the previous administration, without appropriate justification for such policies.”

Wheeler said the previous standards were “the result of a flawed and illegal application of the Clean Air Act by the previous administration.”

An EPA statement called the Obama administration’s methane regulations for natural gas production and processing, meanwhile, “both improper and redundant,” since the rules designed to reduce VOC emissions also reduce methane emissions. The VOC regulations are to remain in effect.

Part two of the overhaul, dubbed the “technical package,” is meant to benefit smaller oil and gas operators “who are the backbone of the energy industry in this country,” Wheeler said.

This section exempts low-producing wells “from expending significant funds to monitor leaks,” EPA said, with the reasoning that smaller producers don’t have the same access to capital as larger players.

The technical package also reduces leak monitoring at gathering and boosting compressor stations from quarterly to twice a year, and it eases recordkeeping and reporting requirements. In addition, the technical rules among other things allow leak repairs to be deferred if a repair within 30 days would not be not technically feasible.

Wheeler highlighted the dramatic fall in U.S. natural gas prices, carbon dioxide emissions from the energy sector, and gas imports. He said they have come as a result of horizontal drilling and hydraulic fracturing in areas including the Marcellus and Barnett shales.

Wheeler suggested the progress to expand gas production in the United States would have been hindered if the Obama administration’s methane rules had been in place at the start of the unconventional exploration and production (E&P) revolution.