Another Pennsylvania state court has weighed in on Sunoco Logistics Partners LP’s Mariner East pipeline projects, this time rejecting the company’s efforts to dismiss a lawsuit against it in a decision that’s likely to set the stage for a statewide ruling about whether the pipelines have eminent domain rights. 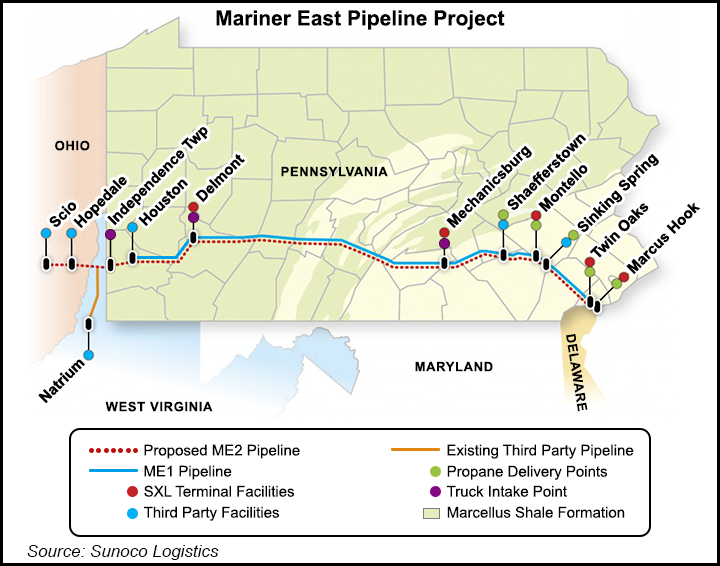 The Philadelphia County Court of Common Pleas last week ruled that the Clean Air Council and two affected landowners that brought the lawsuit have standing to bring the case and the court has jurisdiction to hear it.

The plaintiffs argue that Sunoco shouldn’t be allowed to use eminent domain to build the Mariner East pipelines because they’ve been designed as an interstate system to primarily serve overseas markets and not an intrastate system that would benefit the state and qualify for eminent domain status as a public utility. Sunoco continues to maintain that eminent domain is a last resort for parts of its project, but it has argued in this case that the plaintiffs don’t have standing, and the Pennsylvania Public Utility Commission should decide on the matter and not the state court.

The Clean Air Council claims the company has asserted to “landowners along the proposed Mariner East route that it has the right to use eminent domain to build the projects through their properties.”

The 350-mile Mariner East 2 pipeline would transport ethane, butane and propane from processing and fractionation complexes in Eastern Ohio, Western Pennsylvania and West Virginia to the Marcus Hook Industrial Complex, a former oil refinery near Philadelphia that’s being repurposed for natural gas liquids storage, processing and distribution to domestic and international markets.

Mariner East 1 is already delivering propane within the state and last September the company announced a binding open season for a third pipeline in response to shipper demand (see Shale Daily, Sept. 14, 2015). If constructed, the three pipelines would have a total capacity of 770,000 b/d. Construction on Mariner East 2 is expected to begin this year.

Judge Linda Carpenter sided with the plaintiffs, finding that the system would be engaged in interstate commerce and ruling that they have standing in the matter because their properties would be subject to the impacts of the project.

“By refusing to dismiss our suit and certifying the matter for appeal at this stage, the court now has set the stage for a statewide ruling on whether Sunoco can continue to get away with using eminent domain for private profit at the expense of the environment and the citizens of the commonwealth,” said attorney Michael Bomstein, who represents the landowners.

But Sunoco said in a statement that the court failed to rule on the merits of the case and said the decision was limited to standing and jurisdiction, adding “that these are questions that are likely to be decided by a higher court.”

The Clean Air Council said it expects Sunoco to appeal the ruling to the Pennsylvania Superior Court within a month. In any event, the matter of whether the project has eminent domain status appears to be headed to a higher court. Last week’s ruling was the latest in a series of split decisions on the matter across the state.

In 2014, however, the York County Common Pleas Court found that the pipeline was an interstate system with no eminent domain powers. Other cases against the project are still pending in Washington and Westmoreland counties.