Plentiful oil production growth from countries that are not members of the Organization of the Petroleum Exporting Countries (OPEC) should adequately supply “any likely level” of demand through 2020, helping to contain prices for consumers in a “vulnerable” global economy, according to the International Energy Agency (IEA). 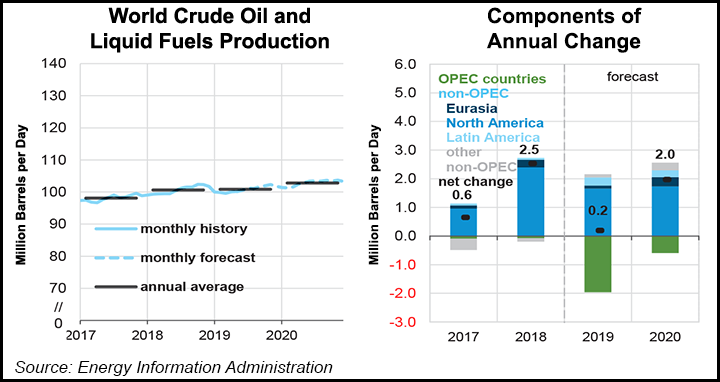 In the latest Oil Market Report issued last Friday, IEA said it expects U.S. producers to contribute 90% of the 1.9 million b/d in non-OPEC supply growth projected for this year. Heading into 2020, non-OPEC supply should grow by 2.3 million b/d, with U.S. gains backed up by “important contributions” from Brazil, Canada and Norway, according to the global energy watchdog.

Crude prices have fallen off dramatically in recent weeks, with West Texas Intermediate (WTI) futures dropping from highs in the mid to upper $60s/bbl to the low $50s. IEA attributed the recent sell-off, which has seen Brent prices fall from $70 down to around $60, to demand-side concerns. IEA now expects global demand growth to slow this year to 1.2 million b/d, down 0.1 million b/d from projections issued last month.

The revisions to demand come amid weakening global economic sentiment, including, among other indicators, an outlook from the Organisation for Economic Co-operation and Development (OECD), which is projecting 3.2% gross domestic product (GDP) growth in 2019, lower than IEA had previously estimated.

“The consequences for oil demand are becoming apparent,” IEA said. “In 1Q2019, growth was only 0.3 million b/d versus a very strong 1Q2018, the lowest for any quarter since 4Q2011. The main weakness was in OECD countries where demand fell by a significant 0.6 million b/d, spread across all regions.

“There were various factors: a warm winter in Japan, a slowdown in the petrochemicals industry in Europe and tepid gasoline and diesel demand in the United States, with the worsening trade outlook a common theme across all regions.”

In developing countries, i.e. non-OECD countries, however, grew demand by 0.9 million b/d for the period, “although recent data for China suggest that growth in April was a lackluster 0.2 million b/d.”

IEA noted that OECD projects global GDP growth rebounding to 3.4% in 2020 “assuming that trade disputes are resolved and confidence rebuilds.” Such a scenario would allow global oil demand growth to recover from 1.2 million b/d in 2019 to 1.4 million b/d in 2020, researchers said.

“A clear message from our first look at 2020 is that there is plenty of non-OPEC supply growth available to meet any likely level of demand, assuming no major geopolitical shock, and the OPEC countries are sitting on 3.2 million b/d of spare capacity,” IEA said. “This is welcome news for consumers and the wider health of the currently vulnerable economy, as it will limit significant upward pressure on oil prices. However, this must be viewed against the needs of producers, particularly with regard to investment in the new capacity that will be needed in the medium term.”

Mirroring IEA’s outlook, other analysts see weakening demand growth prospects for crude amid uncertainty over the health of the global economy.

“Data points from world markets and equities confirm that both global economic growth and demand for crude are under attack, and market sentiment in WTI is not immune to these factors,” analysts with Drillinginfo said in a note Monday. “Trade tensions between the U.S. and China, which are subduing global economic growth, may be addressed” at the G20 Summit scheduled later this month, “but neither side has publicly shown a strong interest in resolving the issues.

“This lack of interest has placed a cloud of uncertainty over the markets, as traders continue to trade out of risk assets that are linked to economic growth” including crude oil and commodities in general “and into safety trades like the U.S. Treasury.”

A team of analysts with BofA Merrill Lynch Global Research, led by Francisco Blanch, concluded in a report Monday that the “the frail oil market equilibrium has tilted,” leading them to revise lower their forecasts for Brent and WTI prices during the second half of 2019 to $63 and $56, respectively, versus $68 and $58 previously. Looking ahead to 2020, the BofA analysts project Brent prices at $60 from $65 and WTI at $54 from $60.

Further escalation in the U.S.-China trade tensions could see prices drop below these assumed levels, BofA researchers said. “Our global demand growth projections of 0.93 million b/d and 1.0 million b/d for 2019 and 2020 are roughly aligned with our economists’ GDP forecasts. Yet there is a risk we end up being too optimistic if the U.S.-China trade relationship deteriorates further. Additional tariffs would likely force us to revise our numbers lower.”

Still, lower prices have helped balance the market, and other factors could help stabilize oil markets going forward, including an agreement from OPEC to limit supply growth, interest rate cuts from the Federal Reserve and the potential for the Trump administration to “dial down the trade war if macro risks intensify.”

On the other hand, significant downside risks remain should U.S. tensions with China and U.S. tensions with Iran “merge into the same issue” through the oil trade, a scenario that could send oil prices off a cliff and drop WTI to $40, according to BofA.

“Keep in mind that Iran was a top oil supplier to China historically until White House policy got in the way,” the analysts said. “China’s recent Iran oil import cutbacks to comply with U.S. sanctions suggest President Xi is still serious about getting a trade deal done.

“…But after the initial reduction in Chinese purchases in November, China recently dialed imports of Iranian crude back up to previous record highs for the month of April. This could be a one-off, or it could be a symptom of the trade war trenches getting deeper with recent escalation in bi-lateral tariffs…If Chinese refiners start to purchase Iran oil in large volumes on a sustained basis as U.S. tariffs rise again, WTI could drop to $40.”