Eight of North America’s oil and gas producers filed for bankruptcy during the first three months of this year, the highest quarterly total since 2016, according to Haynes and Boone LLC. 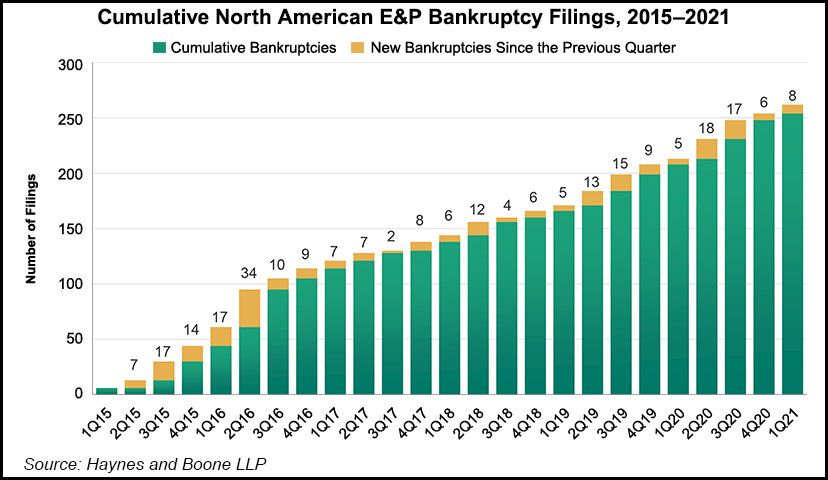 The law firm, which has monitored North American producer Chapter 11 filings since 2015, on Thursday issued its latest report covering 1Q2021. It also issued an overview of bankruptcy activity in the oilfield services (OFS) and midstream sectors.

“The aggregate debt for producers that filed in 1Q2021 is just over $1.8 billion, which is the second lowest first quarter total, after $1.6 billion in1Q2019,” the firm’s researchers noted.

Texas, where the majority of U.S. energy operators are headquartered, accounted for one-half of all the filings by exploration and production (E&P) companies through March, at four total.

“There were no producers with billion-dollar bankruptcies this quarter, which has not happened since 3Q2018,” Haynes and Boone’s team noted.

One E&P of note to seek protection in March was Denver-based HighPoint Resources Corp., a Colorado pure-play. It filed for Chapter 11 after a senior notes exchange offer failed by merger partner Bonanza Creek Energy Inc. However, the filing did not hamper the merger proceedings.

In the OFS sector, five companies filed for bankruptcy during the first quarter. That was the third-lowest first-quarter total since 2015. Again, Texas accounted for most of the OFS filings at four, or 80% of the total.

Meanwhile, three midstream companies sought Chapter 11 in 1Q2021, “which is average for years in which there have been filings in the first quarter,” the firm’s researchers noted. And no surprise: Texas accounted for two-thirds of the total midstream bankruptcy filings.

The midstreamers filing for Chapter 11 during 1Q2021 had aggregate combined debt of $6.7 million, the lowest since 2015 in years for which there were filings in the first quarter.

“Since 2015, there have been the exact same number of producer bankruptcies as oilfield services company bankruptcies: 262,” the researchers said. Over the past six years, they have tallied 262 producers as seeking protection, along with 298 total OFS and midstream companies.

Energy executives of late have expressed a more optimistic outlook on capital availability and commodity pricing for the oil and gas sector, according to recent surveys by Haynes and Boone. Most respondents to the firm’s spring 2021 Borrowing Base Redeterminations Survey forecast that borrowing bases would rise by up to 10% this spring versus fall 2020. By comparison, in the fall survey, most predicted a decline of 10-20%.