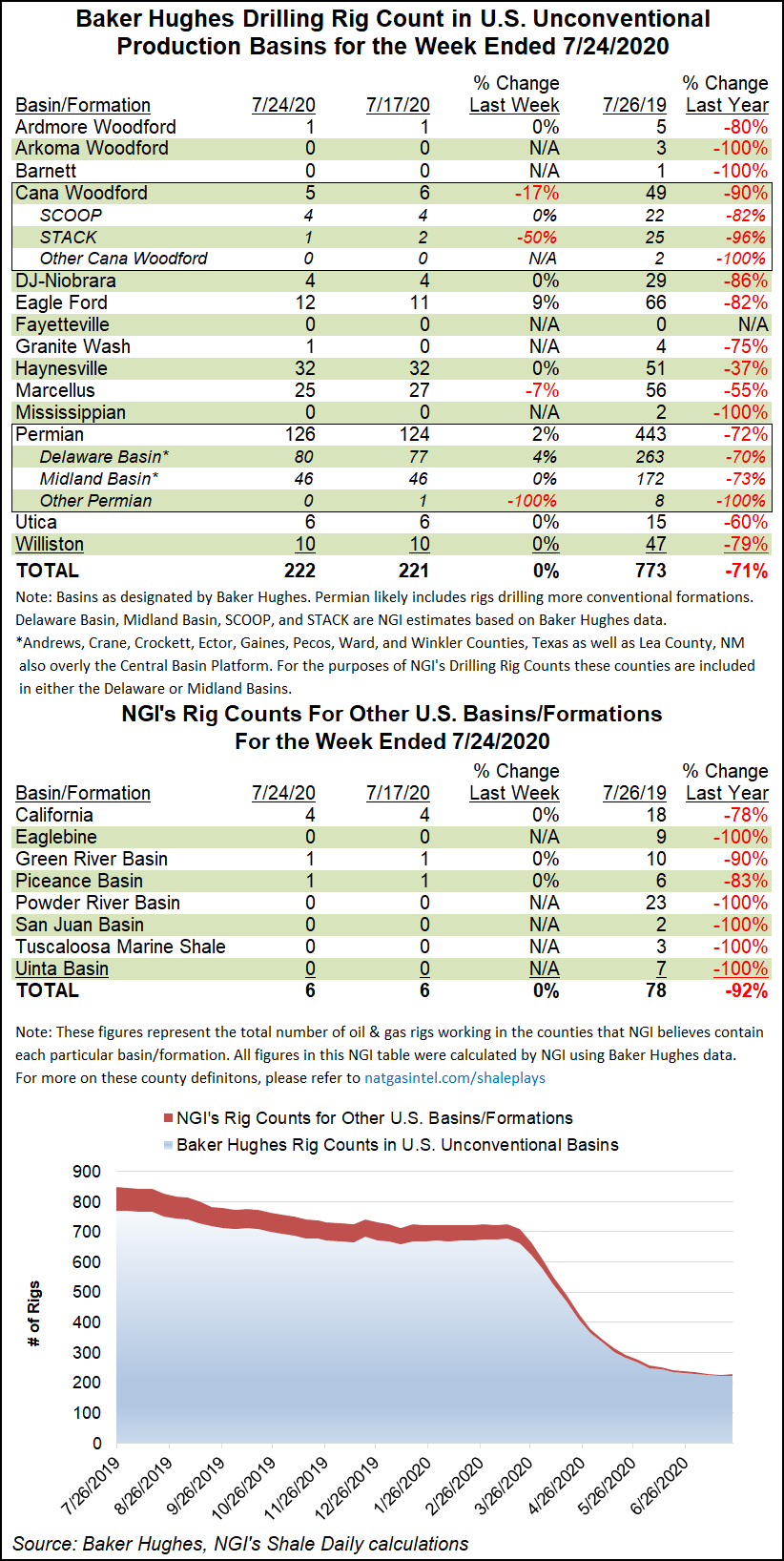 Further retrenchment in natural gas-directed drilling dropped the overall U.S. rig count two units to 251 for the week ending Friday (July 24), but the domestic oil count edged higher for the first time in months, according to the latest data from Baker Hughes Co. (BKR).

The United States added one oil-directed rig for the week, the first net increase in BKR’s oil count since mid-March. The modest uptick in oil drilling partially offset a three-rig decline in domestic natural gas rigs. That left the combined U.S. count nearly 700 rigs behind the 946 active units a year ago.

Land drilling saw a net decline of two rigs, while the Gulf of Mexico held steady at 12 active units, down from 23 a year ago. One directional rig and one vertical rig exited for the week, according to BKR.

The Canadian rig count climbed 10 units to end at 42 for the week, including six gas-directed and four oil-directed units. The 42 active rigs compares with 127 at this time last year.

The combined North American rig count climbed eight units to finish at 293, down from 1,073 in the year-ago period.

Among U.S. plays, the Permian Basin saw the largest net increase week/week, picking up two units to grow its tally to 126. The Eagle Ford Shale and Granite Wash each added one rig.

The gassy Marcellus Shale saw the largest net decline, dropping two rigs to fall to 25, versus 56 a year ago. The Cana Woodford saw one rig exit on the week.

Among states, New Mexico saw a net increase of one rig for the week, while Pennsylvania, Texas and West Virginia each dropped one rig from their respective totals, according to BKR.

“Recently, the rate of decline in the industry rig count has slowed, and we believe our rig count has stabilized,” Hendricks said. The third quarter rig count likely won’t budge beyond 59, “in line with our current rig count.”

Meanwhile, Schlumberger Ltd. CEO Olivier Le Peuch on Friday reminded investors and analysts that the energy industry has a solid history of being able to “go into a crisis and rebound. So, there’s no doubt that this industry will engineer and innovate its way out of the current crisis.”

Le Peuch expects the industry to be different “on the other side of this cycle from what we have known in the last 10 to 15 years…I think capital efficiency, capital discipline, cost of service delivery will be the prime elements of differentiation.”