Hilcorp Alaska LLC said Saturday it had agreed to reduce the pressure in a leaky natural gas pipeline in Alaska’s Cook Inlet following talks with the state’s governor and environmental regulators. 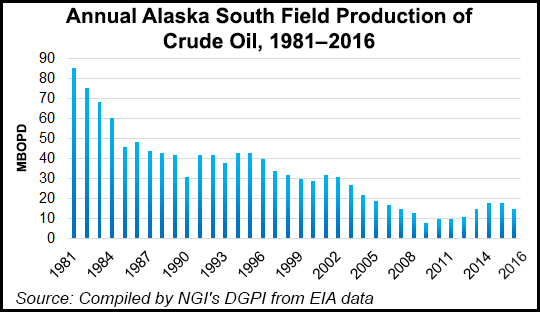 The company agreed to cut pressure to 65 psi from 145 psi, which will require shutting in oil production from Middle Ground Shoal platforms “A” and “C,” the company said.

“Previous weather conditions have prevented Hilcorp from shutting in oil production at an earlier date,” the company said in a statement. “Shutting in wells and idling lines and equipment in very cold temperatures create a known risk of freeze-up and potential rupture. Warmer ambient temperatures now permit a safer shut in process of the wells along with the associated lines and equipment.”

The leaking pipeline is an eight-inch diameter natural gas line in the Middle Ground Shoal area of the Cook Inlet. It supplies gas to four Hilcorp oil platforms.

Shutting in oil production allows the gas pipeline to operate with 65 psi, the minimum positive pressure. Minimum positive pressure is necessary to prevent water from entering the line and a potential washout of residual crude oil that remains in the pipeline. The pipeline previously had been used for crude service. Maintaining minimum pressure also will allow the platforms to run essential equipment and safety systems, Hilcorp said.

Hilcorp said Monday that it completed production shut-in procedures over the weekend in Middle Ground Shoal and the gas pipeline was operating at 65 psi.

“The reduced [natural gas] leak rate is estimated to be 85-115 Mcf/d,” the company said. “Pumps are circulating filtered sea water through the adjacent oil pipeline to reduce the risk of freezing in the line. Production will be restored when Hilcorp, along with federal and state regulators, confirm that it is safe to do so. Based on current weather forecasts and ice conditions Hilcorp expects to mobilize equipment and deploy divers to begin repair operations within the next 10 days.”

A spokeswoman did not respond to an inquiry about how much oil production was being shut in.

The pipeline leak was discovered in February, and the presence of sea ice has prevented the company from attempting a repair since then. Earlier this month, the U.S. Pipeline and Hazardous Materials Safety Administration ordered Hilcorp to conduct an external inspection of a crude pipeline near the leaking natural gas pipeline.

The state of Alaska has created an incident webpage that provides details on the leak’s location and history.