As part of “replumbing America,” local distribution companies (LDC) will be driving the next wave of natural gas infrastructure growth across the country, a Tallgrass Energy Partners LP executive said Tuesday. 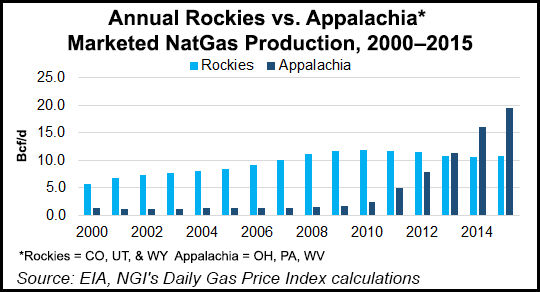 Matt Sheehy, president of the company’s Rockies Express Pipeline LLC (REX), was the luncheon speaker Tuesday at the LDC Gas Forum Rockies & West conference in Denver. The original REX pipe was to move gas from the Rockies east, but it has become instrumental in reversing the flow from the Marcellus Shale west.

The future pipeline infrastructure buildout won’t come from the “producer model,” he said, but instead from LDCs that would spur a new phase of pipe growth.

The gas industry is “heading into a new phase of growth in the LDC world,” Sheehy said. “The producers and the pipelines have been in the driver’s seat for awhile, but I think it’s the LDCs that are going to assume that role now.”

The current trend is something that midstream players and producers are unaware of, according to Sheehy, but he expects more LDCs to step up and take equity positions in the future buildout from the supply basins.

Using the Marcellus Shale as an example, where there has been a continuing need to move pent-up supply, Sheehy said the question “is where is that gas going? Getting it out is fine, but you have to get it to the burner tip.”

He said LDCs know where the demand is going to be among power plants and industrials better than any other segment of the industry.

A backdrop for this trend would be the continuing change in traditional U.S. supply basins, and Sheehy sees the environment as one that LDCs and end-users have to step up and say what they want. Producers always want nothing more than a long-term agreement with LDCs.

He thinks that new infrastructure is going to be critical, both interstate pipelines and in the LDC territories.

Sheehy said the growth would be “repurposing” infrastructure, particularly in the East moving westward.

“This wave of LDCs stepping in and the ‘replumbing of America’ is going to happen throughout the West,” he said. For example, he noted that in St. Louis the LDC is reaching out for access to new supply basins through REX. “They also know they can go back to the Rockies, which is still a very prolific supply zone.”

LDCs have the visibility, strong balance sheets and what end-use customers have now and what they will need in the future, said Sheehy. They are no longer going to be “operating behind the scenes.”

From an interstate pipeliner’s perspective, he warned that reliability must remain a key factor in the wave of so-called replumbing he sees coming. “Old horsepower, old assets, high fuel rates and emission are not just the pipelines’ problem.”