With an eye toward winter weather, natural gas price volatility is likely to return in 2017, given the prospect for potential capacity constraints and ever-larger exports to Mexico to support gas-fired generation, according to ConocoPhillips’ Jim Duncan, who directs commodity market research. 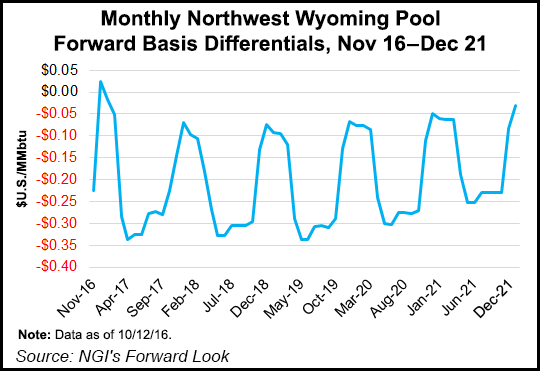 Speaking Tuesday at the LDC Gas Forum Rockies & West meeting in Denver, Duncan said that assuming that traditional winter weather shows up, even a “half-polar vortex winter,” developments driven by the electric generation sector are likely to shake up gas prices. Duncan, along with other speakers at the conference, also predicted that the Rockies would return as a key supply basin in the years ahead.

The Rockies are a re-emerging market, primarily because of the advent of renewables, increased power demand, and what that means for gas, he said. He noted that power generation is “the big sector that will continue to grow,” aided by the Mexican national electric company’s push to build and convert to more gas-fired generation there.

Mexico’s imports of U.S. gas supplies for power generation are projected to grow from a current total of 3.7 Bcf/d to 8.2 Bcf/d over the next few years, he said. Meanwhile, the U.S. renewables market has climbed substantially, with wind hitting 9.8 GWh and solar 4.3 GWh last year. That “means natural gas demand is going to grow.”

Those dynamics come after five years of oversupply and the transformation of gas into a global commodity. The ConocoPhillips strategist said he expects price volatility to increase next year as oversupply weakens and global economic growth slows. Duncan also predicted that the West, and particularly the Rockies, is where a lot of the drivers for gas supply/demand will be found. Matt Sheehy, president of Rockies Express Pipeline LLC echoed Duncan’s assessment, as did ICF International senior economist Michael Sloan (see Daily GPI, Oct. 12).

“I’m a little less bearish on the Rockies,” Sheehy said. He thinks there is going to be more investment capital in the region.

“I think the Mancos Shale is going to be a game-changer, so if you have the geology and the recovery source capital, that’s all you need,” Sheehy said (see Shale Daily, June 8). “The Rockies right now are suffering from investment capital going to the Permian and Marcellus, but I think that is going to change.”

Sloan agreed with Duncan that demand is going to grow, particularly in the Rockies, increasing gas price volatility.

“Also as a result, I would expected the seasonal value and the volatility value of natural gas storage to grow,” Sloan said.