While there is still much bullishness toward natural gas as a transportation fuel, industry leaders cast some doubts over its relative role in building demand for gas at LDC Gas Forum Mid-Continent in Chicago on Monday. 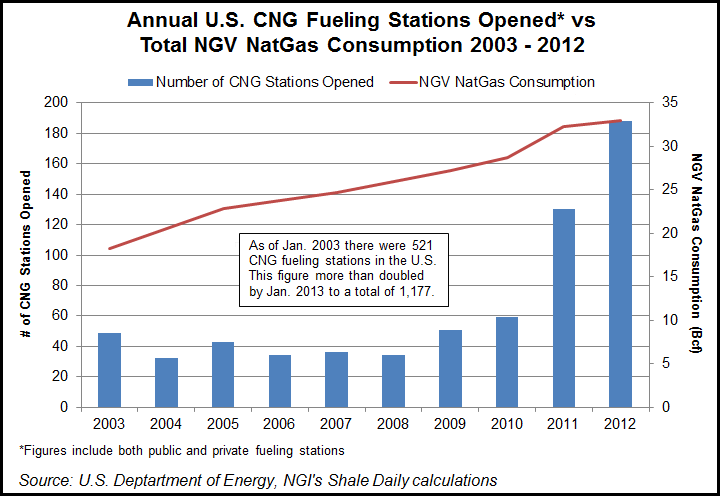 In contrast to the vehicle transportation sector, Casey said XTO sees growth opportunities for gas in the marine sector and in heavy-duty trucking and rail through LNG. “There is still a long way to go here; these areas can pave the way for more future conversions to natural gas,” Casey said.

AGL Resources’ Nicor Gas President Elizabeth Reese said she is not picking sides in the CNG-LNG debate, but the market reality is that of the 15 million natural gas vehicles (NGV) worldwide, only about 140,000 are in the United States. “But while some people see this as one thing [on the negative side], we see this as an untapped market opportunity,” she said, touting the potential for 65 million NGVs globally in the next 20 years.

On a smaller scale in today’s market, however, Reese cited the proverbial chicken-egg problem between making more NGVs and building the fueling infrastructure for them. Nicor now has 14 CNG stations, three that are public access and another six with limited public access. Nationally, the growth in built and planned NGV fueling facilities has been brisk since 2009, she said.

The lack of CNG infrastructure is being addressed. From 2003 to 2010, the number of new public and private CNG vehicle fueling stations being added each year across the United States was fairly stagnant. However, the numbers began to jump in 2011. According to U.S. Department of Energy (DOE) data, 59 CNG stations were opened in 2010, followed by 130 in 2011 and 188 in 2012. Through 2012, there were 1,177 public and private vehicle fueling stations across the country.

“For fleets with low-mileage predictable routes with daily return-to-base operations, we see that CNG is winning the debate,” said Reese, adding that Nicor is working with transportation and other fleet operators that are using CNG. The long-haul fleet market “is the viable option,” she said.

CNG demand for natural gas vehicles has been growing at a steady rate since 2003, when 18.3 Bcf was consumed by the segment, according to DOE data. For 2012 that number had grown to 32.9 Bcf.

Nicor is preparing its utility infrastructure to accommodate any companies wishing to switch their fleets to natural gas, Reese said. “We’re lucky here in northern Illinois to have a lot of push-pull for NGVs,” she said. While the Naperville, IL-based AGL utility is not in the position to help resolve the chicken-egg problem, it is making sure the gas infrastructure is available for creating the fueling infrastructure. Longer term, Nicor hopes to work with others in the industry on the chicken-egg issue, Reese said.

Part of an LDC Forum panel on supply-demand, America’s Natural Gas Alliance’s (ANGA) Paul Smith, infrastructure director, said the ANGA membership alone has a potential 70 Bcf in annual demand for gas for use in its field operations, including transportation vehicles. And this estimate doesn’t include the potential the alliance members see for marine transportation.

“The marine market is really interesting,” said Smith, detailing how ANGA is spending a lot of time in Houston assessing the potential fueling possibilities along the Gulf Coast with many of its members. “This is another significant opportunity for natural gas that is starting to play out along the Gulf of Mexico coast. These are the types of markets that are very fuel intensive and the scale of possible savings is very significant.”