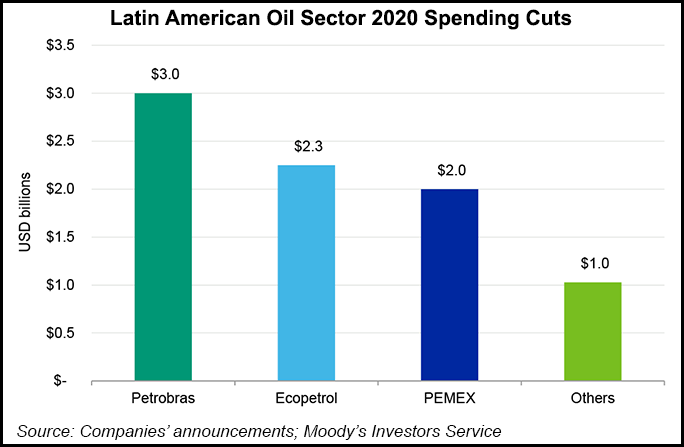 Latin America oil and natural gas companies will cut close to $8.3 billion in capital expenditures (capex) in 2020, or about 30% from original guidance for the year, according to Moody’s Investors Service.

“So far the sector’s efforts to protect liquidity have only partially succeeded, however,” analysts said, citing the sharp reduction in oil and gas demand globally because of the coronavirus pandemic, slowing economies and wildly fluctuating oil prices.

However, “the worldwide economic damage from the coronavirus pandemic has started to ease and will continue to do so in the second half of 2020.”

Despite the complications, most companies in the region are equipped to survive the crisis.

About 57% of the Latin American operators are national oil companies, fully or majority owned by the national government, “a circumstance that makes those companies unlikely to default,” analysts said.

Ecopetrol’s credit metrics in particular are less affected by low prices and fuel demand as it has strong cash flow from its midstream business, the analysts said.

The Moody’s report highlighted measures by the Mexican government to strengthen Pemex’s financial position earlier this year. These include a fiscal relief decree pertaining to the profit-sharing duty, or DUC by its Spanish acronym, which accounts for 80% of the producer’s direct fiscal burden. It should amount to about $2.7 billion in savings this year.

While arguing that Pemex has “very high support” from the Mexican government, shielding it from default, Moody’s analysts said it “will have to draw completely on its $8.9 billion committed credit facilities, of which $4.8 billion were still available in early June, to help fund enough capital investment in the year just to keep its production stable,” which is “a step back from its original projections for 9% growth.”

In its bid to grow oil and gas production by 1 million b/d during the 2019-2024 period, Mexico is the only Latin American nation to have maintained or grown its rig count numbers since the the coronavirus pandemic began to spread in March. In June, the country had 40 active rigs running, compared with 32 in June 2019. In May, Mexico had 42 rigs running, compared with 34 in the year-ago month.

Still, Mexico’s oil production fell to 1.64 million b/d in May from 1.66 million b/d in the year-ago period, according to the latest industry data provided by the country’s upstream watchdog Comisión Nacional de Hidrocarburos (CNH), its first drop in production in five months.

The figures were also the first to reflect committed oil production cuts by Mexico for May and June under the curtailment agreement between the Organization of the Petroleum Exporting Countries and its allies, aka OPEC-plus, to balance an oversupplied oil market in the wake of Covid-19 demand destruction.

Even resuming normal production, the International Energy Agency has said Mexico oil production is likely to stay flat through 2021, with the natural decline of legacy fields operated by Pemex offsetting any production gains at the firm’s so-called priority fields.

The government’s push to increase oil and gas production during a pandemic might also be having disastrous effects on the health of its workers. Pemex said Tuesday 202 employees and five contractors had died of the coronavirus to date.

Pemex is scheduled to report its second quarter results on July 28.