At current prices, Latin American oil reserves at risk of not being developed or pushed out into the future could amount to 16 billion barrels, according to new research by IHS Markit. 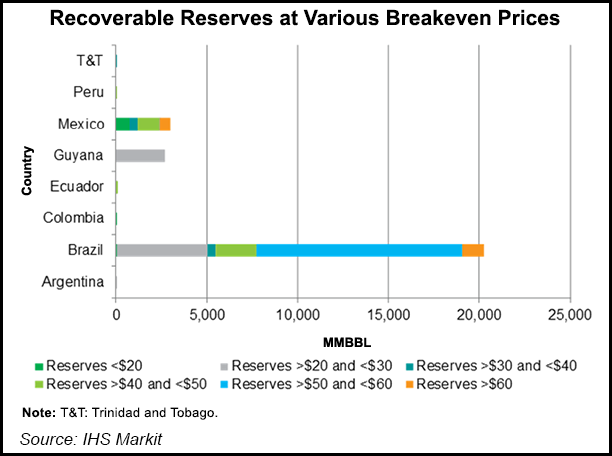 The analysis looked at oil-targeting projects in Latin America which had a presumed or announced sanctioning date falling between 2020 and 2022. Reserves in Brazil, followed by Mexico, are the most likely to be impacted.

Some $65 billion of investment could be put at risk of disappearing in the short term as projects get delayed, with Brazil most likely to be impacted due to the complexity of developing its deepwater pre-salt field.

Latin America produces around 8 million b/d of crude, with Mexico and Brazil together accounting for half of this amount.

At $50/bbl, cash flow from the IHS selection of assets to the end of the decade is approximately $40 billion. That same set of assets cumulatively do not make money at an oil price of $30/bbl, Sen said.

Rystad Energy on Tuesday said that at least nine of the world’s top planned oil and gas exploration wells for 2020 are at risk of being suspended as a result of the Covid-19 virus and the oil price war.

“Given the prevailing global situation we now foresee that the cumulative discovered volumes by the end of the year could go even below the 2016 level of 8.9 billion boe, which was the decade’s lowest. This will solely depend upon how many key wildcat wells will still see a spinning drillbit in the coming months, as some of them could be either suspended or postponed,” said Rystad Energy senior upstream analyst Palzor Shenga.

The U.S. Energy Information Administration (EIA) said Brent crude prices averaged $32/bbl in March, or $24 less than the February average. The agency now expects Brent to average $33 in 2020, or $10 less than its previous forecast and almost one-half the $64 average of 2019.

EIA expects global petroleum and liquid fuels demand will decrease by 5.2 million b/d in 2020 from an average of 100.7 million b/d in 2019, but sees demand increasing by 6.4 million b/d in 2021. The lower global oil demand growth forecast “reflects growing evidence of significant disruptions to global economic activity along with reduced expected travel globally because of Covid-19.”

With oil prices languishing, Saudi Arabia, Russia, and other major oil producers including Latin American nations have scheduled a remote meeting for this Thursday during which production cuts are expected to be discussed.

Most U.S. upstream players have already slashed their capital spending (capex) on average by 35-40% year/year versus original guidance, according to Evercore ISI.

Brazilian state firm Petróleo Brasileiro SA, or Petrobras, has said it will slash capex by $3.5 billion to $8.5 billion and will also temporarily curb production by 200,000 b/d or about 6% of total output.

Analysts suggest that Brazil is in a better position than Mexico with producing assets in the upstream segment.

“Brazil has some resilience to low oil price because Brazil is an offshore play,” Brazilian energy expert Jorge Camargo said in a webinar organized by the Washington DC-based Atlantic Council think tank last week. “Pre-salt is 70% of production, and that is capex and technology intensive. The big players are there and are more resilient than others. Pre-salt has extraordinary productivity, and so they have very robust economics with lifting costs of $6-7/bbl.”

Brazil also has a regulatory framework that is open to private participation, as is the case with Guyana.

On Tuesday, the world’s largest publicly held explorer, ExxonMobil Corp., said it was cutting capex by 30%, to $23 billion, but remained committed to its long-term growth plan to develop numerous deepwater discoveries offshore Guyana.

In contrast, Mexico is in a more difficult position now that its government has tried to shut down the opening of the sector by cancelling bid rounds, joint ventures and farmouts.

During the Atlantic Council webinar, Goldwyn Global Strategies President David Goldwyn said that the question for private operators who won exploration and production contracts during the previous administration in Mexico right now is, “do they stay or do they go? Mexico has undermined its resilience by pausing auctions.”