Although headlines on current tightness in the global natural gas market have mostly focused on Europe, Latin America has played a role in the crisis as well, according to Columbia University’s Luisa Palacios. 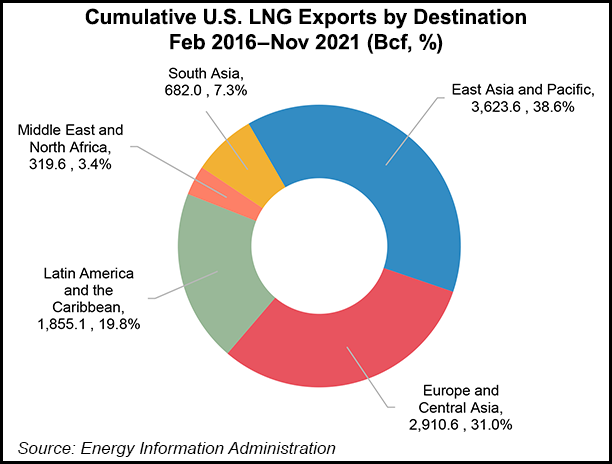 Latin America experienced one of the strongest liquefied natural gas (LNG) demand surges in history last year, Palacios said, “and really it was a combination of factors that led to this.”

On the supply side, the region saw a more than 10% year/year decline in natural gas production in 2020 as a result of the pandemic. The region then saw a substantial year/year recovery in domestic gas demand in 2021 as economies began to recover from the trough of the pandemic.

The International Monetary Fund estimates gross domestic product in Latin America and the Caribbean to have risen by 6.3% in 2021 versus recession-stricken 2020.

“And so what that meant is that from a significant decline in domestic consumption you went the opposite to a significant…recovery,” Palacios said. “And so this, coupled with one of the worst droughts [on] record that South America has seen, meant a perfect storm for the huge spike in LNG imports that we saw in Latin America’s winter.”

Imports of LNG into the region totaled 10.44 million tons during the first eight months of 2021, up 120% from the comparable 2020 period and 36% from the same span in 2019 before the pandemic, according to market research firm Kpler.

Part of why the regional demand surge was so disruptive to the global LNG market last year is that “it’s a very volatile type of demand, and it’s very seasonal,” Palacios said.

For the July-October period in 2021, for example, Latin America was pulling 30% of U.S. LNG exports, Palacio cited.

Historically, i.e. from February 2016 to November 2021, 19.8% of cumulative U.S. LNG exports went to Latin America and the Caribbean, according to the U.S. Energy Information Administration.

Latin America’s largest economy, Brazil, is especially prone to drought-induced swings in LNG demand due its dependence on hydropower.

State oil company Petróleo Brasileiro SA, aka Petrobras, said Jan. 12 that in 2021 it recorded an all-time yearly record for LNG imports at 23 million m3 (0.81 Bcf)/d. LNG accounted for about 30% of Petrobras’ total gas supply, and was “essential to meet the demands contracted by its customers,” the firm said.

The company’s LNG imports were about triple the amount recorded in 2020, Petrobras said. “The 2021 record is the result of the initiatives adopted by the company to expand the supply of natural gas to the market, such as, for example, increasing the capacity of the regasification terminal in Rio de Janeiro,” management said.

Petrobras imports LNG primarily from the United States, Trinidad and Tobago, and Qatar.

Palacios also noted a 25% decline over the last five years in natural gas production from Bolivia, historically a major supplier of gas via pipeline to neighboring Brazil and Argentina.

This trend has led Brazil and Argentina to add LNG regasification capacity as a way to diversify their gas supplies. The countries also have sought to ramp up domestic production, from the offshore pre-salt formation in the case of Brazil, and from onshore unconventional deposits in the case of Argentina.