Upstream oil and gas spending in Latin America is on track for a modest year/year (y/y) recovery in 2021 after a pandemic-driven slowdown in 2020, according to Evercore ISI. 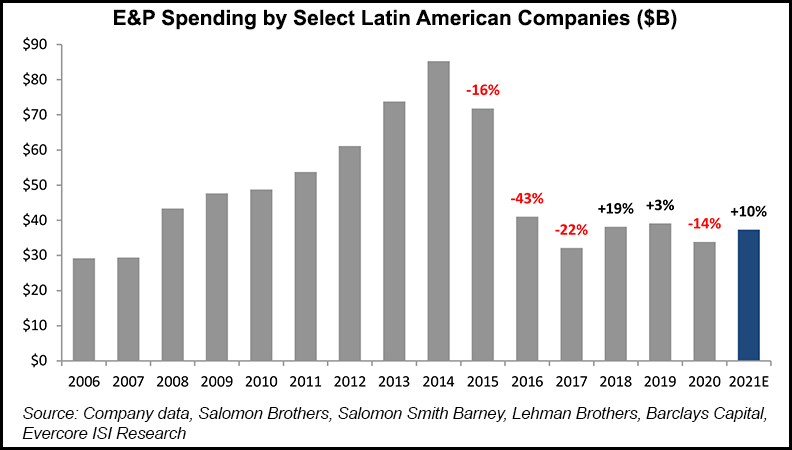 Exploration and production (E&P) spending by select firms in the region fell by 14% y/y in 2020, Evercore analysts said in the firm’s 2021 Global E&P Mid-Year Spending Outlook. The report, based on a survey of nearly 250 oil and gas companies worldwide, was completed in May and published June 10.

Last year’s spending decline was more modest than the 26% plunge forecast by Evercore in its initial 2021 survey published late last year. As a result, capex by select firms in the region is now projected to rise 10% y/y in 2021, versus the 27% rise previously forecast, said the team of Evercore researchers led by James West. National oil companies (NOC) are the driving force behind the revisions.

“A new onshore discovery in the state of Tabasco estimated at 500 million to 600 million boe adds to an earlier cluster of discoveries for total resources of up to 1.2 billion boe,” researchers said. Pemex is proposing to drill 65 wells over three years to bring on line 138,000 b/d of oil production.

Pemex spent billions on the development of Chicontepec during the administration of President Felipe Calderón (2006-2012). However, results were underwhelming because of challenging geological conditions and steep well decline rates.

The Poza Rica development plan entails drilling and completing 345 wells, along with 122 well workovers, from 2021-2034.

The Evercore team also noted that plans are moving forward with the Trión field operated by BHP, which would be Mexico’s first deepwater oil project. Plans include a floating production unit capable of handling 100,000 b/d, “with BHP potentially sanctioning Trion in 2022 for first oil in 2025 or 2026,” researchers said.

Brazil is also poised for an uptick in activity.

“Having sanctioned the giant pre-salt Buzios and Mero fields, Petrobras is kicking off a new exploration drive in the Campos basin to unlock new pre-salt clusters,” Evercore researchers said.

They cited that ExxonMobil, TotalEnergies and Equinor ASA “have also stepped up activity offshore Brazil, with Equinor due to sanction Bacalhau later this year.”

Researchers also noted recent comments by Brazil’s mining and energy minister Bento Albuquerque rejecting the International Energy Agency’s assertion that no more investment in oil and natural gas fields should be sanctioned if the world is to achieve a carbon-neutral economy by 2050.

Researchers said the collapse in global E&P spend last year ranked among the worst downturns in history, but 2021 is the beginning of a multi-year recovery that will accelerate into 2022 and beyond.

The outlook indicates that U.S. producers remain a bit cautious regarding their capex plans. However, as Henry Hub natural gas and West Texas Intermediate (WTI) prices strengthen, E&Ps could increase their spending into the last half of this year.

“The U.S. economy may be roaring, but the E&P operating base is contracting as the result of consolidation, bankruptcies and dissolution. Internationally capex growth is mixed, with select regions such as Europe and the Middle East accelerating, while a bit more modest growth is anticipated for Latin America and Russia.”

The “new multi-year recovery is starting slightly slower, but from a higher base.” Overall, global upstream capex is set to climb by 5% from 2020, about 200 basis points (bp) lower than the 7% anticipated last December.

The report’s authors added, “A coordinated global upturn is on the horizon and we anticipate higher capex growth for the U.S., Canada and international markets for 2022 and beyond.”

The average price outlook for spending in 2022 is based on price forecasts of $59/bbl WTI and $2.80/Mcf Henry Hub.

With current spot oil prices near the upper end of the $50-75/bbl range cited by E&Ps for 2022 capex, analysts said there is “upside bias” for capex to go higher beginning in the second half of this year.

“Similarly, the average Henry Hub gas price of $2.80 for establishing 2022 capex is below the current spot price of $3.10/MMBtu, which is in the lower half of the $2.50-4.00/MMBtu range for setting 2022 budgets and suggests there could be upside to gas-directed capex as well.”