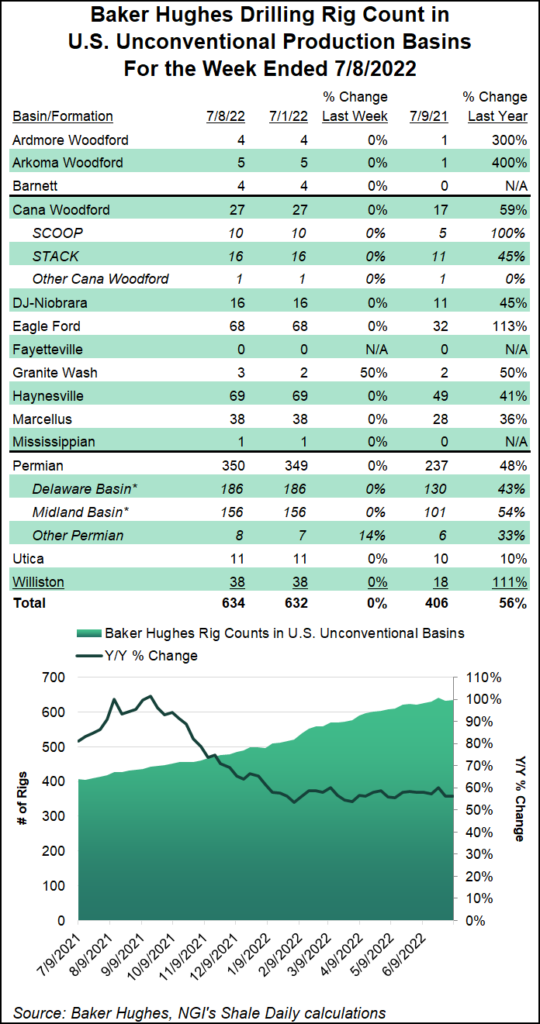 Oil-directed drilling rose by two units to 597 in the United States week/week, while natural gas-directed rigs were unchanged at 153. The combined 752 active U.S. rigs compares with 479 rigs running in the year-earlier period, according to the BKR numbers, which are partly based on data from Enverus.

Land drilling increased by one unit domestically. One rig was added in inland waters, while the Gulf of Mexico count was unchanged at 16. Two vertical rigs were added, with total directional and horizontal rigs flat for the period.

The Canadian rig count rose nine units to 175 for the week, including gains of seven oil-directed rigs and two natural gas-directed units. The combined Canadian count finished 38 rigs ahead of its year-earlier total of 137.

Looking at changes among major drilling regions, the Permian Basin added one rig to bring its total to an even 350. That’s up from 237 at this time a year ago. The Granite Wash also added a rig week/week to end with three active units, according to the BKR data.

Counting by state, Texas and Louisiana each added one rig to their respective totals.

The Railroad Commission of Texas (RRC) reported recently that the number of permits issued in June to drill wells in its East Texas District, which includes part of the gassy Haynesville Shale, jumped 200% year/year.

RRC issued 42 permits to drill oil and gas wells in the East Texas area, aka District 6, compared with 14 permits in June 2021.

RRC staff issued 523 permits for oil and gas wells in June in the agency’s Midland District, which includes the oil-rich Permian Basin. The latest monthly drilling permit total for the region, aka District 8, is 26% higher than the year-ago figure.

Producers pumped 12.1 million b/d for the week ended July 1, according to the EIA’s Weekly Petroleum Status Report. That continued the pace of the prior week, when output first climbed above the 12.0 million b/d threshold in 2022.