Test results from the Rogersville Shale in Eastern Kentucky and Southwest West Virginia continue to trickle out, but activity in the unproven play remains stagnant. 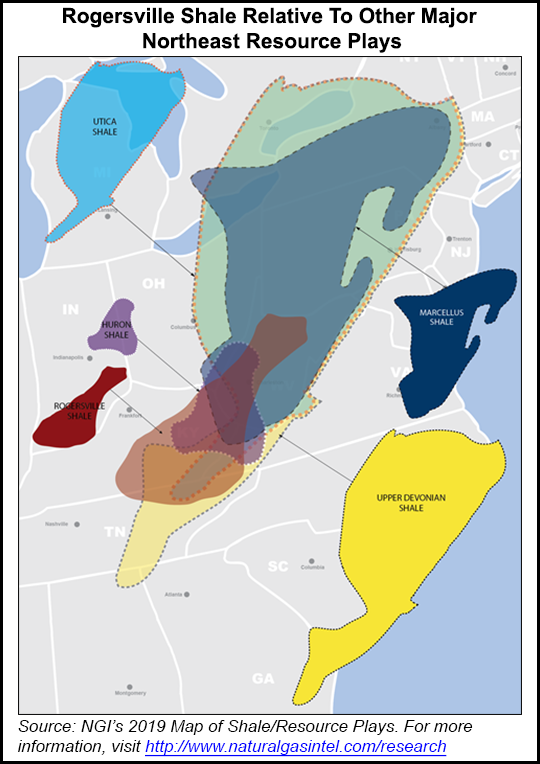 Only six test locations have been permitted since 2013, when Cimarex Energy Co. subsidiary Bruin Exploration LLC was issued the first stratigraphic test permit in Lawrence County, KY. Charleston, WV-based Hard Rock Exploration Inc. had applied for a vertical test permit in Putnam County, WV, but it filed for bankruptcy in 2017. The mid-2014 commodities downturn also helped to curtail exploration activity in the play.

While there’s been little activity recently, data from earlier wells that had been protected by state confidentiality laws has since become available, again revealing lackluster results from a play that has generated some buzz in recent years as an up-and-coming target for Appalachian producers.

Bruin’s second natural gas well in the Rogersville, the Walbridge 1H, was drilled to a total depth of 16,108 feet in Lawrence County, KY, and completed with 27 stages in 2017. After a two-month flow test, the company reported initial test volumes from the horizontal well of only 37 b/d of oil and 1.1 MMcf/d of natural gas, according to a completion report filed with the Kentucky Division of Oil and Gas.

“They did recover oil and gas, but apparently not what they were hoping for,” said Kentucky Geological Survey’s David Harris, head of the Energy and Minerals section, who has been tracking development. The well is now temporarily abandoned.

“Cimarex still holds a sizeable acreage position in the area but has no active permits or apparent plans to drill,” Harris said of the company, which primarily operates in the Permian Basin and the Midcontinent.

Cimarex’s first test in the Rogersville, the Sylvia Young No. 1 vertical well in Lawrence County, showed initial test volumes of 19 b/d of oil and 115 Mcf/d of gas, according to results released in 2015.

Cabot Oil & Gas Corp., the only company to so far test near the formation in West Virginia in the modern era, appeared to fare slightly better at its pad to the north of Cimarex in Putnam County. The company’s vertical Amherst well was drilled to a total depth of 14,520 feet and completed in 2015, testing at 2.4 MMcf/d.

The Amherst, which the West Virginia Department of Environmental Protection lists as an active well, produced 338.8 MMcf between 2015 and 2017, according to state records available for that time.

Harris noted, however, that the completion report shows the well producing from a zone above the Rogersville listed as the “Conasauga,” meaning it “might not be a true Rogersville Shale test.”

Located in a deep sub-basin known as the Rome Trough, the Rogersville is one of six formations in the Conasauga Group, which also includes two other shales. There’s been limited production from the group south of Kentucky, but the organic-rich Rogersville is thought to be isolated and confined to Kentucky and West Virginia.

The impetus for today’s interest in the Rogersville actually happened decades ago. A series of documented wells were drilled to the Rome Trough in the 1960s and 1970s. In the mid-1960s, the Inland No. 529 White well drilled in Boyd County, KY, north of Lawrence County, yielded the first commercial oil production from Cambrian-age rocks in the sub-basin. But it was a predecessor company to ExxonMobil Corp., Exxon Corp., that drilled several deep wells in the Rome Trough at the time, revealing more about the Rogersville.

One of those tests, drilled to the Maryville Limestone in the Conasauga Group in Jackson County, WV, produced 6-9 MMcf/d of gas, according to the U.S. Geological Survey. That well would have been north of Cabot’s in Putnam County. Exxon also cored the Rogersville with its No. 1 Smith well in Wayne County, WV.

No data has been released from an EQT Corp. affiliate, which drilled a horizontal Rogersville well in Johnson County, KY, about four years ago. EQT retained the deep rights on its acreage in the state after selling its Huron formation assets last year.

Chesapeake Energy Corp., meanwhile, drilled two vertical wells in Lawrence County in 2015, the Northup and Stephens wells. But Harris said little data is available from those, as it appears the company conducted only small-volume, pre-fracture tests. Both wells were shut in in 2016, according to completion reports filed with the Kentucky Division of Oil and Gas.

“I think it is fair to say that more work is needed to make the play economic, not unusual in new unconventional plays where several wells are often needed to figure it out,” Harris said.