North Dakota’s record-setting pace for oil and natural gas production continued to slow for the most recent month reported, and the prospects are for the slowing trend to continue at least through March, the state’s top oil/gas official said Thursday. 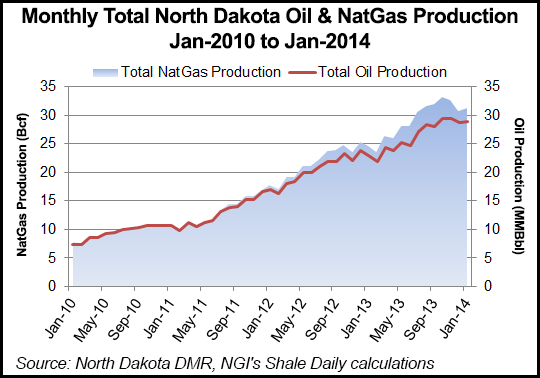 Helms who was predicting the state’s oil production would hit one million b/d early in 2014 (see Shale Daily, Oct. 15, 2013) has now pushed back his prediction to April.

Helms said there were relatively few (60) well completions in January, and normally it takes at least 90 to result in increased monthly production. However, a large drop in production in December allowed the still paltry January totals to result in a small month-to-month increase, he said.

Part of the story of the reduced January production is the fact that operators (Hess, Oasis and Statoil) shut in more than 100 wells in an effort to reduce flaring of associated gas in the face of delays in opening the new Tioga gas processing plant. “The commissioning of the new gas plant is moving significantly slower than anticipated, although it was successfully pressure tested last Friday,” he said, adding that the plant should be online by the end of this month.

The other significant contributor to flat production growth was high winds, which curtailed drilling operations about one-third of the time during January, Helms said.

“I’m not real hopeful about February production having a very significant increase since winter came back real hard that month, and March is shaping up the same [with major road closures],” he said. “We may not get the bump up in March we were looking for either.”

On the positive side, Helms pointed to oil prices staying in the mid-$80s ($86.89/bbl in February) and the rig count stands at 191 as of Thursday (189 in February). In addition, he classified natural gas prices as “much stronger” due to the colder winter and resulting low storage levels.

For January, gas prices delivered to Northern Border Pipeline at Watford City, ND, were up $2.15/Mcf to $6.65/Mcf. Flared gas percentages remained at the same high levels in January, hitting 36%.