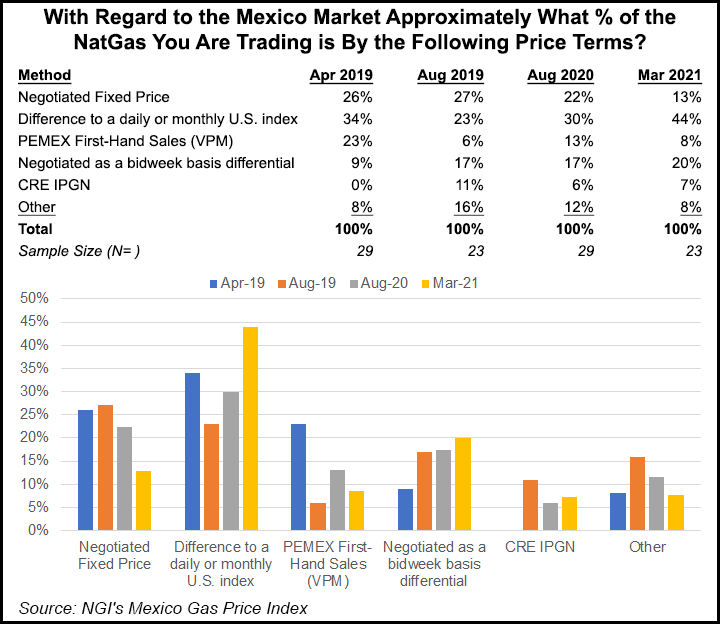 The survey, conducted in late February/early March, received 23 responses from buyers and sellers in Mexico.

According to respondents, 64% of gas bought and sold in Mexico is either done as a difference to a daily or monthly U.S. index, or is negotiated as a bidweek basis differential to the Henry Hub. That’s up significantly from the 40-47% range from the first three surveys held over the past two years.

If you include the First Hand Sales (VPM) mechanism, a formula used by state oil and gas firm Petróleos Mexicanos (Pemex) that is tied to U.S. indexes, the 64% figure jumps to 72%.

However, “it will be interesting to see whether that trend continues following the surge in U.S. spot market prices in February, thanks to the deep freeze that drove daily Houston Ship Channel and Waha prices to respective highs of $400/MMBtu and $350/MMBtu last month,” said NGI’s Patrick Rau, director of strategy and research.

Rau suggested that as a result of the Texas energy crisis, some market participants in Mexico might change their methods and look to more localized price indicators in the months ahead.

In the latest survey, the Mexico market showed a little more willingness to transact to a domestic benchmark. The IPGN monthly natural gas price index published by the Comisión Reguladora de Energía (CRE) represented 7% of activity this survey, up from 6% last summer.

“We applaud CRE for its efforts in establishing this method of price discovery, but IPGN has several important drawbacks that undermine its ability to serve as a true market price signal,” Rau said. “Mainly, it is lagged, and we understand it represents the price of gas billed to customers, regardless of when those deals may have been transacted. Those deals therefore could have been conducted when market fundamentals were quite different.

“The IPGN also could include extraneous charges that do not necessarily represent the intrinsic value of the gas.”

Although Mexican president Andrés Manuel López Obrador has been making overtures toward favoring Pemex and state utility Comisión Federal de Electricidad (CFE), it hasn’t appeared to impact the transactional behavior of the Mexican natural gas market in any meaningful way, according to survey results.

Pemex and CFE accounted for a combined 32% of market activity in NGI’s latest survey, up 1% from their total in August 2020. Independent marketing companies also added a point of market share, rising to 31% from 30%.

Independent power producers dropped from 16% to 12%. But considering that group accounted for 13% of market activity in the August 2019 survey, “it’s reasonable to conclude that could be sampling error, rather than any significant result from López Obrador’s desire to favor CFE in the power generation dispatch,” said Rau.

Also of note from the latest survey is that weekly deals have largely vanished from the trading landscape in Mexico. Such deals haven’t really been a big part of the portfolio mix since NGI started canvassing the Mexico market two years ago, but they were just 1% this time around, after peaking at 12% in April 2019, and coming in at 9% in the August 2020 survey.

Daily deals were 47% of the total, down slightly from 52% in August 2020. Monthly transactions made up the difference, rising to 44% of the total versus 31% last August.

Daily and monthly deals now make up more than 90% of the contract portfolio mix in Mexico, up from just 56% two years ago, basically in line with trading activity in the United States.

“The next step to developing indexes in Mexico is to add more market participants,” Rau said, “and to have those participants feel comfortable about voluntarily reporting their transactions to price reporting agencies, such as Natural Gas Intelligence.”

For more on how Natural Gas Intelligence calculates its U.S. indexes, and to review our pledge of confidentiality to our price contributors, please go to www.naturalgasintel.com/methodologies.