Spot gas also jumped sharply Tuesday, with the culmination of some, but not all, pipeline maintenance giving a big boost to Permian Basin prices. NGI’s Spot Gas National Avg. shot up 29.5 cents to $2.455.

After Monday’s breather in the futures market, prices raced out of the gate Tuesday as eager traders jumped on the news that the U.S. Coast Guard (USCG) would allow vessels of all sizes to transit the Calcasieu Ship Channel. Although a barge remained submerged in the waterway, USCG and the Lake Charles Pilots Office “have planned a test-transit with limited draft” if conditions permitted Tuesday, Cameron LNG spokesperson Anya McInnis told NGI.

“Despite all of the potential issues we heard about the last few days, it is full steam ahead for LNG,” said Bespoke Weather Services. Noting the whirlwind of LNG news in recent weeks, Bespoke said “it shows just how sensitive the market is to LNG, which will be more of a running theme moving forward.”

In a Tuesday update, the USCG said six test vessels with beams of 106 feet or less were moved over the weekend. After passing a sunken barge with the mid-size vessels, the Lake Charles Pilots Office recommended removing the restriction of 106 feet of beam, but retained the maximum draft of 36 feet.

The U.S. Army Corps of Engineers has contracted with the U.S. Navy to salvage the sunken barge. Divers were on scene Tuesday evaluating the situation and a salvage plan was expected to be presented soon. The salvage operation is expected to take “a number of weeks,” according to the USCG.

Cameron hasn’t loaded any vessels since Oct. 5, according to ClipperData. At least three vessels are waiting in the Gulf of Mexico.

Meanwhile, LNG exports are resuming at the Sabine Pass LNG terminal, though the Jasmina oil rig that sank in the Sabine-Neches waterway had not yet been removed.

During a Port Coordination Call on Tuesday, the West Gulf Maritime Association (WGMA) reported that crews had “made a lot of headway.” WGMA said the salvage master could be testing pumping from various ballast tanks, but there were still some issues that needed to be addressed before the USCG could approve the plan and crews proceed with their recovery efforts. These plans included sinking the rig in a safe location once it’s been removed from its present location.

The Army Corps has a boat on standby awaiting the rig’s removal from the channel so they can begin surveying the area, according to WGMA.

ClipperData said the LNG vessel Palu left the Sabine Pass terminal on Monday (Oct. 19) while another LNG vessel, Sten Clear Sky, was docked at the terminal.

Four ships had sailed from the waterway since Monday afternoon, WGMA said, including two that were above 36 feet in draft. They passed the area “without incident and with sufficient under keel clearance.” Seven other ships were brought in, nine vessels with drafts exceeding the maximum were queued up ready to depart, and five more were waiting to transit inbound, according to WGMA.

NatGasWeather said with production down nearly 1 Bcf day/day, the supply/demand balance has become increasingly tight and the background state more bullish for gas. This suggests storage surpluses should continue to decline in the weeks ahead. For now, however, stocks are currently stout at 354 Bcf above the five-year average.

That makes weather forecasts all the more important as the market is less than two weeks away from the official start of the gas winter season. NatGasWeather said the midday Global Forecast System (GFS) data flipped back a little milder for next week by slowing the release of cold air over the Rockies and Plains eastward. In fact, the GFS holds the warm ridge over the East much longer and barely has any cool air from the central United States make its way to the region.

“Essentially, a bit of change in this GFS run toward the bearish side for next week,” according to NatGasWeather.

The forecaster noted that most of the weather data forecasts a mild overall U.S. pattern the first several days of November as comfortable conditions rule most regions. However, there is potential for colder trends in time, according to NatGasWeather, “as a slight shift south with colder air over Canada would make the start of November more bullish than it currently looks.

“The latest GFS again teased ways the start of November can trend colder and needs watching.”

Any further growth in LNG exports and colder weather ahead would be a boon for prices. However, with the expected rise in prices would inevitably come an acceleration in gas to coal switching. Tudor, Pickering, Holt & Co. (TPH) analysts said with basis expected to tighten into the winter, they expect a 2.5 Bcf/d reduction in demand year/year.

The latest data points show gas’ share of thermal power generation in the 67-71% range, well above TPH’s regression results, which point to a 60% share of thermal generation at a Henry Hub price of $2.80. Analysts see the disconnect being driven by weak local pricing, with most regional hubs largely missing out on the Henry Hub rally.

However, as winter demand picks up, local constraints relating to full storage and congested export pipes are no longer expected to be an issue, according to TPH. This should tighten regional basis and reduce gas’ competitiveness versus coal.

“In our view, gas to coal switching will be one of the key balancing mechanisms in 2021 and, based on our supply/demand balances and expected price elasticity of power generation demand, we see the FY 2021 strip fairly priced at around $3/MMBtu,” TPH said.

Spot gas prices were much stronger Tuesday, with heat continuing from California to Texas and frosty air over the northern Rockies and Plains. NatGasWeather said the crisper conditions were expected to spread south and east this weekend into North Texas and the Midwest before finally reaching the Great Lakes, Ohio Valley and East next week.

With power burns still strong, prices rallied again in trading for Wednesday’s gas day. In Texas, double-digit gains were the norm, but El Paso Permian tacked on a hefty 63.0 cents to average 39.0 cents. Larger-than-normal hikes were prevalent across the region as El Paso Natural Gas Pipeline wrapped up some maintenance on Line 1204.

However, the pipeline has a slate of other work taking place throughout October that would restrict flows along the system. For example, work on the “El Paso” meter is cutting about 290 MMcf/d of flows relative to the September average. This work started Oct. 13 and is expected to wrap up at the end of the month.

Total Permian export flows through Cornudas, which is upstream of the “El Paso” meter, dropped by around 375 MMcf/d day/day when this maintenance started and have remained suppressed since then, according to Genscape Inc. The firm indicated that daily Permian production has consistently come in below 10 Bcf/d for nearly a week, and Alpine High receipts have fallen off in response to the price drop.

“The Alpine High point has been below 100 MMcf/d for six straight days, the first time that has happened since late April when prices were severely negative,” Genscape analyst Joseph Bernardi said. “For reference, Alpine High receipts averaged 191 MMcf/d last month.”

Elsewhere, prices across the Midwest jumped anywhere from about 15.0 cents to nearly 35.0 cents, while a couple of market hubs in the Midcontinent posted larger day/day increases.

Prices across Louisiana and the Southeast jumped around 30 cents or more, although Henry Hub was up by a smaller 25.5 cents to $2.585.

Appalachia hubs posted some of the smallest gains at less than 20.0 cents at the majority of locations. Columbia Gas was up 14.5 cents to $2.115.

That’s likely because all deliveries from Columbia Gas Transmission (TCO) onto Texas Eastern Transmission (Tetco) were being restricted by up 214 MMcf/d until further notice because of a compressor station outage at Tetco’s Waynesburg Compressor Station and a subsequent force majeure issued by TCO.

Genscape said Tetco would be unable to receive gas from TCO and therefore the Waynesburg (C14) interstate interconnect between the two pipes was to be set to zero total capacity. Tetco planned to perform maintenance from Tuesday through Thursday, but TCO had not provided an end date to the force majeure.

“Over the past 30 days, receipts onto Tetco at Waynesburg have averaged 155 MMcf/d and maxed at 214 MMcf/d,” Genscape analyst Anthony Ferrara said. “Furthermore, the force majeure on TCO is restricting up to 328 MMcf/d of southbound and westbound flows, with the most impactful restrictions occurring at the Artemas throughput meter in Pennsylvania.”

No end date for these restrictions has been given by TCO, but similar force majeure-related restrictions last week were lifted within four days, Ferrara said. 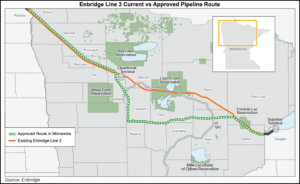 Permits approved on Monday by the U.S. Army Corps of Engineers will allow Enbridge Inc. to keep alive a plan to start construction by the end of the year on the $2.6 billion Minnesota leg of its Line 3 oil pipeline replacement program. The 340-mile pipeline segment has been inching closer to construction for a…