With anxiety mounting over another halt to the flow of Russian natural gas to Europe, Ukraine is continuing its push to fill the void for energy-starved countries as market volatility appears to be impacting their ability to import U.S. LNG. 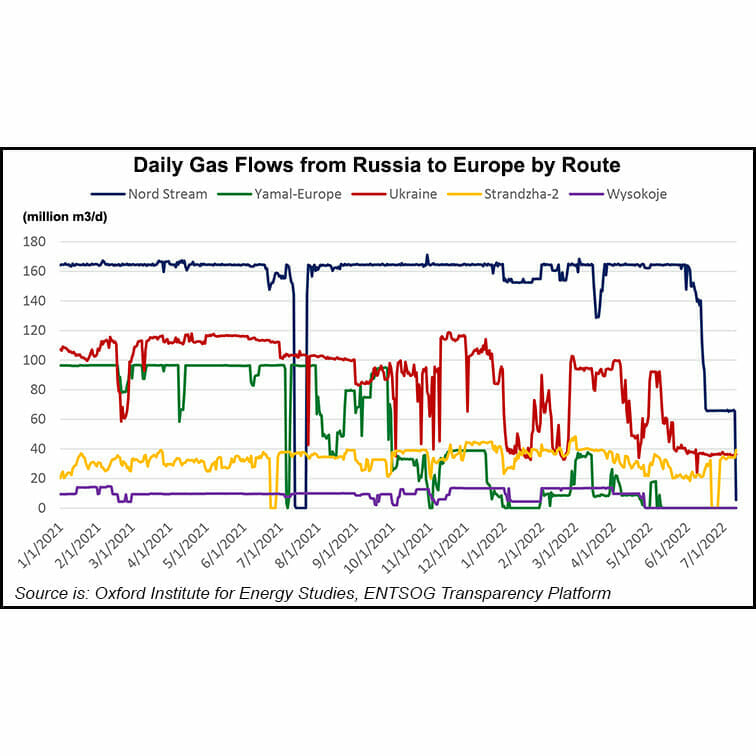 On Friday, Russia’s Gazprom PJSC disclosed its Nord Stream 1 (NS1) pipeline system would halt western flows to Europe for three days at the end of the month for maintenance. The anticipated closure stoked anxieties that NS1 could remain permanently closed after the scheduled period, according to trading firm Energi Danmark.

The news also spiked European markets at the start of the week with prompt Dutch Title Transfer Facility gas futures on Monday jumping nearly 15% from Friday to finish at $81.52/MMBtu.

Henry Hub also stayed at heightened levels Tuesday, briefly flirting with the $10 mark in the early morning before an update on the restart of Freeport LNG caused it to plummet.

NGI’s Pat Rau, director of strategy and research, said the recent signals that “European, Asian and increasingly Latin American buyers have shown they are willing to pay a premium for gas” could continue to drive up the Henry Hub as liquefied natural gas exporters push to capture demand.

However, most of the country’s LNG exporters have already been running near the high end of their capacity since last year, Rau said, and an eventual drawback is coming.

“Furthermore, a number of midstream companies noted during second quarter 2022 earnings calls that U.S. liquefaction operators have been delaying routine maintenance amid these higher global prices, and at some point relatively soon, they are going to have to pull back the throttle and divert gas into storage,” Rau said. “Given where we are in the cycle, it may be too late to do that going into the heating season, but it may serve as a de facto form of storage once winter has begun.”

Bulgaria, which consumes an average 3 billion cubic meters (Bcm) of natural gas annually, imports about 90% of its supplies through Turkey, according to the International Energy Agency. The country could have received three cargoes through the rest of the year and four at the beginning of 2023.

“We will be unable to accept the other two tanker loads due in November and December because slots are unavailable, and those that are available cost dozens of millions of euro, inclusive of unloading, regasification and transit costs,” Hristov told Bulgarian media.

Rau said prices near $70/MMBtu “certainly have been destroying demand for natural gas in Europe,” but it’s been basically doing the opposite for mid-scale LNG export projects. The current market could also be incubating new technology “such as Venture Global’s modular trains and New Fortress Energy’s Fast LNG solution.”

“NFE just announced three Fast LNG projects in the Gulf of Mexico, including two in Mexico, and it will be interesting to see whether that technology gets deployed overseas,” Rau said.

Gazprom’s latest announcement for NS1 has also reignited Ukraine’s campaign to garner support and investment in its gas infrastructure. Shortly after Gazprom’s announcement Ukraine’s gas transmission system operator (TSO) challenged the idea that the Russian firm’s only option was halting transport during maintenance.

“The issue of supplies is exclusively on the political plane because the existing transit network can fully compensate for the shutdown of Nord Stream 1,” representatives for Ukraine’s TSO wrote. “Gazprom’s statements are another attempt to pressure European countries to influence decisions regarding support of Ukraine, and it is also the intention to raise gas prices once again.”

Since shortly after Russia’s February invasion of Ukraine, the country’s government and TSO have been encouraging western allies to rely on its transmission infrastructure as a way of lessening Russia’s control over European energy markets.

Representatives with Ukraine’s TSO reiterated the systems within Ukraine and Poland were still “more than sufficient to ensure the fulfillment” of Gazprom’s obligations and the firm had currently less than 40% of available capacity on its system reserved for European shipments.

Reuters reported Monday that Russian volumes increased on the Yamal-Europe pipeline. Unlike NS1, which transports Russian gas directly to Germany through the Baltic Sea, the Yamal-Europe system uses connections through either Ukraine and Belarus to ship volumes into western Europe through third-party countries.

Ukraine’s TSO has previously warned of potential critical damage to its transmission infrastructure from both fighting in the eastern region and unannounced changes in system pressure from Gazprom.

On Monday, Ukraine’s TSO also reported it would be upgrading the country’s transmission system thanks to support from the United States. As a part of the Agency for International Development’s Ukraine Energy Security initiative, the TSO will introduce new software and automation to its systems. It is also receiving support to develop a financial stress test for the upcoming heating season.