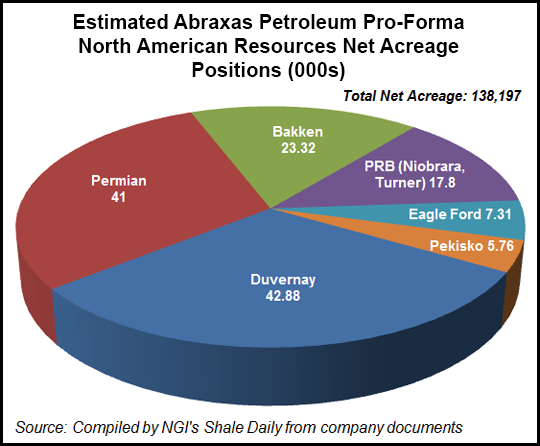 “We are quite pleased with the early performance of the Mustang 1H,” said CEO Bob Watson. “This is our third well in the WyCross area, and [it] materially outperformed our previous best well, the Cobra 1H [see Shale Daily, Jan. 15].”

Also in the Eagle Ford, completion crews have been rigging up on the Corvette C 1H to complete the well with a 20-stage fracture stimulation. Abraxas recently reached total depth on the Gran Torino A 1H with a fracture stimulation date anticipated in February. The company has just spudded its sixth well at WyCross, the Mustang 3H. Abraxas owns a 25% working interest in the Corvette C 1H and an 18.75% working interest in the Mustang 1H, Gran Torino A 1H and Mustang 3H.

Abraxas is active in the Rockies, Midcontinent, Permian Basin and onshore in the Gulf Coast as well as in Alberta, Canada.