Drilling and completion technology has come a long way since the unconventional revolution began, as technology advances in well design are pushing the envelope, sending more oil and natural gas from shale and tight resources than ever before. 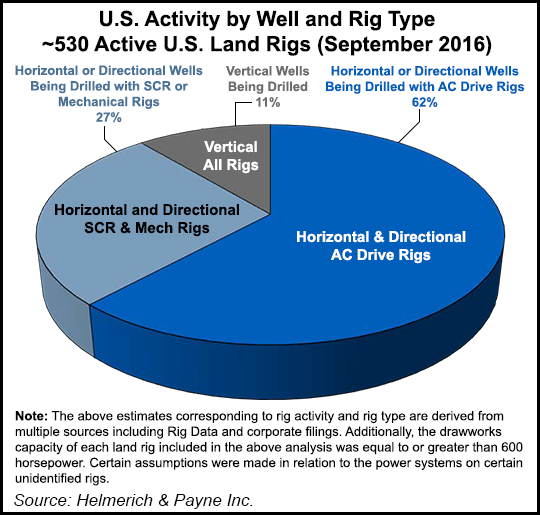 A term coined a few months ago by Chesapeake Energy Corp., “proppant-geddon,” is becoming an industry byword. How far can a lateral go? How about 20,000 feet — or even more? That’s likely to be a reality in the not-so-distant future.

NGI recently took a deeper look at the oilfield services segment and found that while many of the major players reported continuing losses in 3Q2016, the market appears to have hit bottom and is leveling off. Get the latest from those out in front of the E&P field in NGI’s new 23-page report titled Light at the End of the Tunnel: OilField Services Execs Cautiously Eye a 2017 Recovery.

Proppant-geddon was used by Chesapeake to describe completion techniques being used in the Haynesville Shale, where tests using up to 50 million pounds of sand are planned through the end of this year (see Shale Daily, Aug. 5). But more sand, longer laterals and better wells are underway across the entire onshore. Chesapeake’s Black 2&11-15-11 well “is currently in a league of its own,” but “it may soon find company as operators across the U.S. push proppant intensity on optimized completions,” Tudor, Pickering, Holt & Co. (TPH) said in a recent note.

“Industry is moving to longer laterals, more stages per well and more sand per well. It should be clear that this trend will impact fracturing utilization and require more horsepower per well completion,” he said. “More service-intensive wells will also impact many other service lines. Longer laterals will more frequently require premium drill pipe and as we are just beginning to witness, larger drill pipe. More stages will also require more perforating, pump down, fracture stacks, flowback, service rigs, coil tubing — basically everything associated with a fully integrated well services business that we created during this downturn.”

Experimental laterals are “as long as 21,000 feet,” Dunlap said. “Clearly, what we are seeing is more operators that are pushing out what they have historically done from a lateral length standpoint. An operator that may have been going 1.5 miles last year is now going two miles, an operator that was going one mile a year ago is now going 1.5 miles.

“And so that’s pushing everybody a bit further out from a lateral standpoint, lifting the whole market up. I’m not sure we’ll ever see a market where we’ve got a majority of wells that are being drilled that’s like lateral lengths like 18,000 feet. But clearly, the further out we go, the more time our services are on location.”

Eclipse Resources Corp. set a world record earlier this year for the longest onshore lateral — a well in the Utica Shale that was drilled 18,544 feet in 18 days with 124 fracture stages (see Shale Daily, May 5). Noble Energy Inc. during 3Q2016 set a new long lateral drilling record in the Denver-Julesburg Basin at 9,853 feet, with a spud-to-rig release of 4.75 days (see Shale Daily, Nov. 2a).

Anadarko Petroleum Corp. “will likely be leading the charge” in the Permian Basin’s Delaware sub-basin, according to TPH, “as management has now leveled its base completion design in-basin to 2,500 pounds/foot, but it is testing on a leading edge basis wells that will doubleboth proppant and fluid volumes from this base design” (see Shale Daily, Nov. 1). “Datapoints continue to support our view that proppant demand in 2017 will eclipse peak levels last seen in 2014,” which could increase completion costs “by 10-15% purely on in-basin inflation dynamics.”

“You have a fireball with regards to this drilling technology and the growing lateral lengths, which is really polarizing the market in separating guys who can only offer motors to the guys who can offer rotary steerable tools,” Craighead said during a 3Q2016 conference call (see Shale Daily, Oct. 25).

And more sand is coming to more places to accommodate what could be a huge turning point in well design. Houston-based Hi-Crush Partners LP recently secured partners to help fund an innovative logistics company for the proppant industry, which was launched following a successful pilot in the Permian (see Shale Daily, Nov. 2b).

Geoengineering has become the byword for oilfield services, as operators team up with exploration companies to test technologies on new wells and refracture old ones. It’s not only about physical equipment but digital finesse.

Schlumberger Ltd. provided Eclipse with its technology to drill the super lateral in the Utica well using its PowerDrive vorteX system, a powered rotary steerable system. Steerable systems have become all the rage in the onshore drilling world as they can more accurately pinpoint contact. Drilled in one bit run, the super lateral decreased overall costs because it reduced the number of horizontal penetrations required to develop the reservoir.

Schlumberger has other innovative technology being deployed in the U.S. onshore, including in South Texas. Producer Lonestar Resources Ltd. and the operator established the GeoEngineered Performance Alliance, and they plan to fracture three wells in the Eagle Ford Shale on the Ranger Beall Ranch lease. Early production results from the first 150 days showed a 63% improvement in cumulative oil production/lateral foot of reservoir contact for the same time period when compared with offset wells completed in July 2015.

Also in South Texas, Sundance Energy Australia Ltd. and Schlumberger allied to refracture at least five Eagle Ford wells in McMullen County. Schlumberger is confident enough in its technology that under a unique contract arrangement, production increases from the refracturing treatments that exceed the production forecast of the wells would provide the basis for Schlumberger’s remuneration. Production is expected to increase to five to six times the current rate for each well, with a 40-50% improvement in estimated ultimate recoverable reserves.

Schlumberger’s Broadband Sequence fracturing service also was being used to pump up production from a horizontal well in the Permian’s Wolfcamp formation. The technology “sequentially isolated, fractured and stimulated every cluster in each zone of the wellbore,” resulting in a 42% increase in production versus offset wells with the same lateral length, number of stages and volumes of proppant/fluids used.

Partnerships also are ongoing on the production/completion side to provide a “more sophisticated approach to fracking…It’s a fairly small part of the business volume, but these technology opportunities both in the drilling side and on the completion side are really why we are in this market. We’re not in it for the commodity side of it. We believe that ultimately technology will play an even larger role in the North America land markets, and we continue to promote these capabilities and this part of our offering because we ultimately believe it’s going to bring a lot more value for our customers.”

Baker Hughes is partnering with General Electric in a mega-alliance, which should only add to its long list of technology breakthroughs (see Shale Daily, Oct. 21b). Deploying its proprietary AutoTrak Curve rotary steerable system and drillbits, Baker during the third quarter increased drilling efficiencies and cost savings for several key operators in Colorado’s DJ Basin. The technology is drilling 30% faster than conventional systems, which often face challenges steering and staying in the target zone. The Houston operator also set a U.S. record in the Utica, drilling 13,574 feet in one run — curve and lateral — by combining drilling systems, drillbits and completions fluids.

Those with deep pockets are finding other ways to add more value to their business lines, and there are dozens of deals completed or underway to enhance offers. For example, Patterson-UTI Energy Inc. recently acquired Warrior Rig Ltd., a company known in the industry for developing innovative solutions in drilling rig technology (see Shale Daily, Oct. 27).

“This acquisition enhances our technology portfolio and engineering capabilities, especially in the area of high-torque top drives and other pipe handling equipment,” CEO Andy Hendricks said during the quarterly conference call. Plans are to expand the Warrior top drive service center in the United States, increasing capacity to service top drives manufactured by both Warrior and third parties.