Natural gas futures neared the $4.00/MMBtu mark early Thursday after long-range weather forecasts trended colder. But with models backing off the amount of frigid air in the last few days of December, the January Nymex gas futures contract settled at $3.766, off 3.6 cents on the day. February slid 4.6 cents to $3.715. 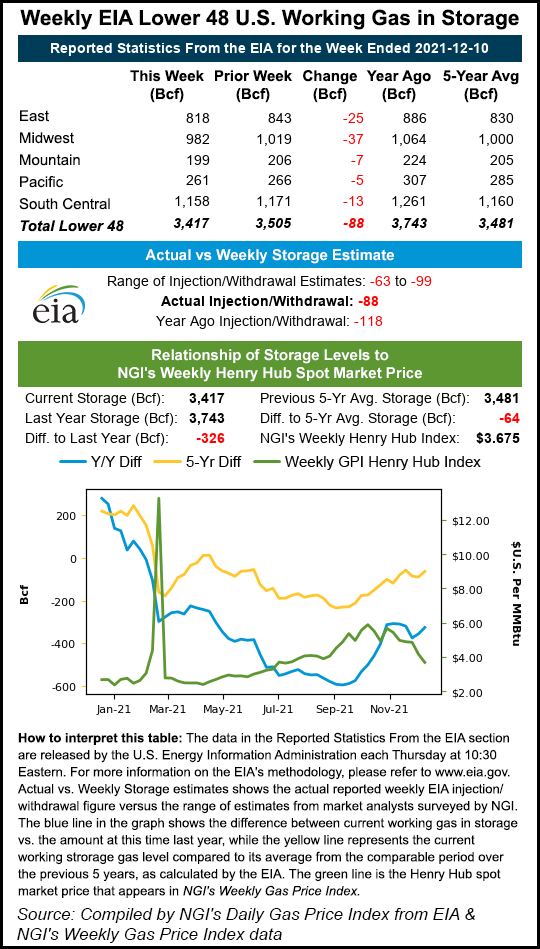 Spot gas prices were mixed on messy weather patterns in the West and Midwest but mostly mild conditions elsewhere across the country. NGI’s Spot Gas National Avg. edged up 4.5 cents to $3.875.

With traders rushing for exits ahead of the holidays, liquidity has progressively thinned in recent days. Only 114,238 January Nymex contracts were traded on Thursday, while February contracts managed less than half that amount.

Bespoke Weather Services said given the shift from high-end warm to something closer to normal late this month – and risks posed by having a strong cold source in Canada with some blocking – “prices would be justified at or even a little above the $4.00 level.” Should models maintain any colder risks with the current supply/demand balance, an eventual move higher in prices should come.

“It is just difficult to find enough buyers in such a thin market,” the firm said.

Meanwhile, NatGasWeather said the midday Global Forecast System (GFS) generally held onto the heating demand increases seen in the overnight models, giving back only four heating degree days (HDD). However, the lost demand occurred in the final few days of December, which has been an important period for the market as it could provide clues on early January weather.

The GFS remains a bit colder than the European model for the last week of December, with the latter model reflecting a warmer pattern over vast stretches of the country Dec. 26-30 besides near the Canadian border. Essentially, the GFS is either still a little too cold for this period or the European Centre (EC) model is too warm.

“The GFS isn’t bullish, just closer to seasonal Dec. 25-30,” according to NatGasWeather, as it advances at least some cold into the northern United States. The EC, meanwhile, keeps the frigid air bottled up over Canada.

Traders on Thursday also had to digest the latest inventory data, which continued to show some tightness in the supply/demand balance. The Energy Information Administration (EIA) reported an 88 Bcf withdrawal from storage for the week ending Dec. 10. The draw was almost dead on with expectations calling for a pull in the high 80s Bcf to low 90s Bcf but far short of last year’s 118 Bcf draw and the 114 Bcf five-year average.

However, when considering the reference week was nine HDDs warmer than the same week last year, the weather-adjusted withdrawal comparison would be near neutral, according to Mobius Risk Group. Without the widespread warmth this month, it is likely that the year-over-year storage deficit would have expanded in December, the firm said.

Looking ahead to January – and the balance of 2022 – the direction the market takes is to remain highly weather dependent, according to Mobius. The firm noted that it is tempting for the market to extrapolate a warm December 2021 to the first month of 2022.

“The last two significantly warm starts to winter, 2015 and 2016, are years which left an indelible mark on the minds of natural gas market participants,” Mobius said.

However, when taking a slightly broader look at the top five warm Decembers prior to this year (2015, 2016, 1971, 1982, and 1998), and at the subsequent January, there is a mixed bag of outcomes, according to the firm. One January within that dataset saw HDDs come in 100 below normal, while another had 50 HDDS more than normal.

“The other three years in the dataset all saw near-normal January HDD counts,” Mobius said. “In summary, winter is not over yet.”

As for the EIA storage data, there were few surprises among the regions.

The Midwest led with a solid 37 Bcf withdrawal and the East followed with a 25 Bcf pull, EIA said. The South Central recorded a 13 Bcf draw, which was solely from nonsalt facilities. Salt inventories saw no net change.

Speaking on The Desk’s online energy chat Enelyst, managing director Het Shah said he was a bit surprised that salt inventories were flat week/week. “I was expecting a small injection of 1-2 Bcf.”

This is notable because salt inventories have been withdrawing in recent weeks, ahead of when pulls typically begin in the region. In addition, the South Central is home to the vast majority of liquefied natural gas export facilities and multiple intrastate pipelines, for which gas flow data is not widely available.

Elsewhere across the country, Mountain stocks fell by 7 Bcf, and Pacific stocks slipped by 5 Bcf, according to EIA.

Total working gas in storage as of Dec. 10 stood at 3,417 Bcf, which is 326 Bcf below year-ago levels and 64 Bcf below the five-year average, the agency said.

Spot gas prices were a mixed bag on Thursday amid messy weather in some parts of the country that was boosting demand.

On the flip side, Southeast locations finished the day mostly in the red as springlike temperatures continued in the region. Transco Zone 5 cash was down 14.5 cents to $3.775.In Louisiana, Henry Hub slipped 7.5 cents to $3.675.