With brief snaps of cold air expected to continue popping up across the United States into the early part of next month, natural gas bulls took the cue to lift the expiring March Nymex gas futures contract to a $1.880/MMBtu intraday high before aggressive selling into the close pushed the contract down to $1.821, off 2.6 cents day/day. April, which takes over the prompt-month position on Thursday, fell 1.4 cents to $1.837. 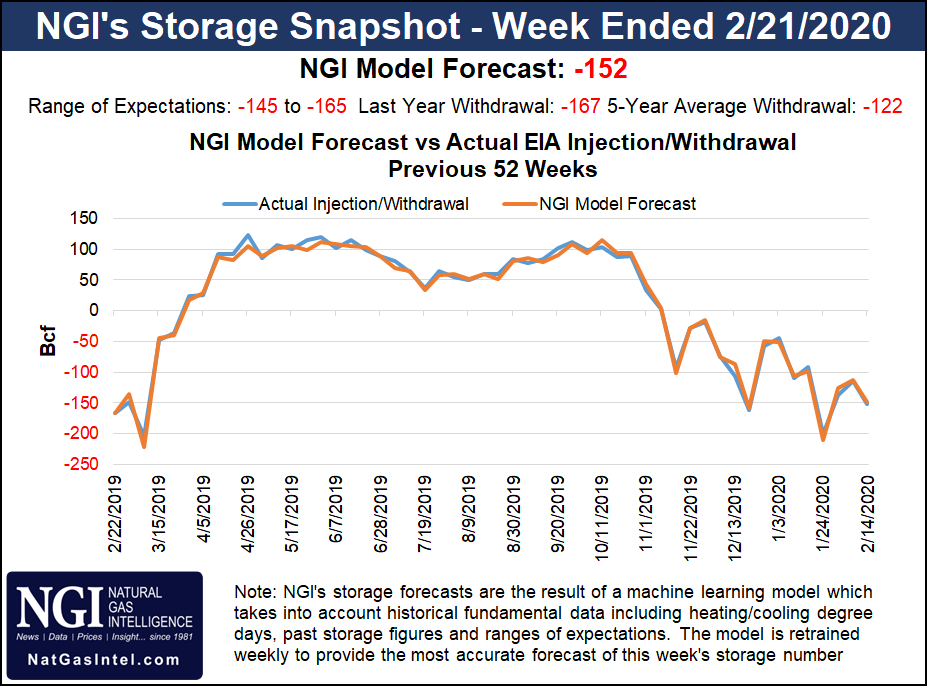 After a few days of warmer changes, forecasts early Wednesday finally moved back a little in the colder direction, according to Bespoke Weather Services. Although the next few days are expected to be warmer than previously forecast, the early part of March has chilly air moving across the Midwest and East, the forecaster said.

“The big picture remains unchanged, still warm dominated, but we are able to at least get a couple of colder days to mix in at times, and another such case appears to be on the way next week,” Bespoke chief meteorologist Brian Lovern said.

The prospects of at least some periods of above-average demand appeared to satisfy traders for most of Wednesday’s trading session. Nevertheless, the high latitude configuration does not favor any sustainable cold, so Bespoke expects to warm back up again after next week, and still has its official forecast positioned warmer than what the model consensus explicitly shows, “as every brief period of colder weather has been followed by a warm-up that turns out to be more significant than models detect at these longer lead times.”

Daily balance data showed “almost no change at all” from Tuesday, according to Bespoke, with production, liquefied natural gas demand and power burns all looking quite stable. “While it does seem that the market is strongly trying to suggest a bottom here in the $1.80-1.85 zone, we must still recognize that a significant warm-up even in the middle of March can add to pressure on prices, so we would hesitate to suggest that we have in fact bottomed just yet.”

With only weeks left in what has been an underwhelming winter, Goldman Sachs Commodities Research analysts chopped off another 30 cents from their natural gas price projections for the year, down to $2.20 from $2.50.

The firm’s latest projections would see Nymex prices average around $2 for the first quarter, $2.10 for the second quarter and $2.20 for the third quarter, Goldman analysts Samantha Dart, Damien Courvalin and Huan Wei wrote in a note to clients published late Tuesday.

Prices for 4Q2020 and Calendar 2021 are forecast at $2.50, “as we expect a sequential tightening of the balance from next winter.”

Indeed, slower production growth on the back of lower prices and stronger U.S. exports continue to do their part to keep the gas market afloat. Recent government storage data has reflected this tighter backdrop as several recent inventory reports have surprised to the bullish side.

The Energy Information Administration (EIA) is scheduled to release its next weekly report at 10:30 a.m. Thursday, with analysts expecting a withdrawal well below last year’s pull for the similar week. A Bloomberg survey of 11 analysts showed withdrawals ranging from 145 Bcf to 165 Bcf, with a median of 156 Bcf. Polls by the Wall Street Journal and Reuters produced similar results, while NGI’s model projected a pull of 152 Bcf.

Over the next four EIA reports, the surplus versus 2019 may add another 200-plus Bcf, indicating a market that is 7.5 Bcf/d looser, according to EBW Analytics Group. Although a portion of this growing overhang already is built into prices, “the unfolding growth of oversupplied benchmark, particularly if the winter-long warming trend continues, is likely to spell further downward pressure on natural gas,” the firm said.

However, producer earnings calls will continue to be important to monitor, according to EBW. With a number of producers reporting, there does not seem to be an enormous response to curtail 2020 volumes, which is another bearish sign for later this year, the firm said.

“Producers are clearly taking a prudent approach in reducing growth projects, but many are still likely to grow volumes slightly, even into the lowest price environment in four years. Still, producer announcements cutting 2020 guidance significantly could provide a near-term bullish stimulus for prices,” according to EBW.

Troubled Appalachia producer Chesapeake Energy Corp. on Wednesday announced plans to slash year/year spending by 30%, with 2020 capital expenditures (capex) of $1.3-1.6 billion. Oil production is expected to remain flat, while natural gas production is to be cut, pushing down overall volumes.

Southwestern Energy, set to report earnings on Friday, has kept a tight lid on capex in the past, according to EBW, but their announcement in 2016 that they were lifting rigs entirely helped form a bottom for Nymex futures. “A similar bullish surprise in 2020 may help reinforce support for natural gas.”

Some rather blustery conditions hit the central United States midweek, and the chilly weather system was set to move into higher demand markets farther east over the coming days. However, with recent weather models showing the system moving out of the country more quickly than expected, cash prices continued to tack on only modest gains.

The Northeast posted some of the largest increases day/day, but even those failed to permeate the entire region. Niagara next-day gas rose only 4.0 cents to $1.750.

The majority of pricing hubs across Louisiana and the central United States notched gains of a few pennies or so, including in West Texas, where El Paso Permian spot gas picked up 4.5 cents to average 42.5 cents on Wednesday.

The gains occurred as even some scheduled work on the Natural Gas Pipeline Co. of America (NGPL) system is expected to disrupt Permian outflows to the Midwest. NGPL declared a force majeure that is set to take effect Thursday through March 3 following a compressor failure at station 102 in Ford County, KS.

Repairs would curtail flows to 73% of contracted firm volumes through stations 102 and 103 on the pipeline’s Amarillo Mainline, according to Genscape Inc.

During one event in May 2019, the NGPL Midcontinent spot cash price was pushed into negative territory. “However, due to this week’s event impacting smaller volumes (268 MMcf/d versus 500-plus MMcf/d in prior events), price fluctuations could be more muted,” McDowell said. “So far this year to date, NGPL Midcontinent basis has remained fairly steady around an average ($0.38) below Hub.”

Genscape also is closely monitoring oil markets and any implications major price changes could have on Permian gas supply. The West Texas Intermediate (WTI) oil price has lost many of the gains it made in the prior 10 days as it once again fell below the $50/bbl mark in Tuesday’s trading and then slipped $49 on Wednesday.

“Crude prices are taking a hit from demand destruction from the coronavirus and concerns it may spark a broader global economic slowdown,” Genscape senior analyst Rick Margolin said. “In recent weeks, $1-moves in the WTI crude price contributed to (though was not the sole driver of) a roughly 0.3 Bcf/d swing in our gas production forecasts.”