After a temporary stall, natural gas futures moved decisively lower Thursday as the potential for more cold later this month didn’t appear to be such a big deal after the Energy Information Administration (EIA) delivered a huge bearish miss on storage data. The Nymex May gas futures contract settled 3.4 cents lower at $2.643/MMBtu, while June fell 2.9 cents to $2.686. 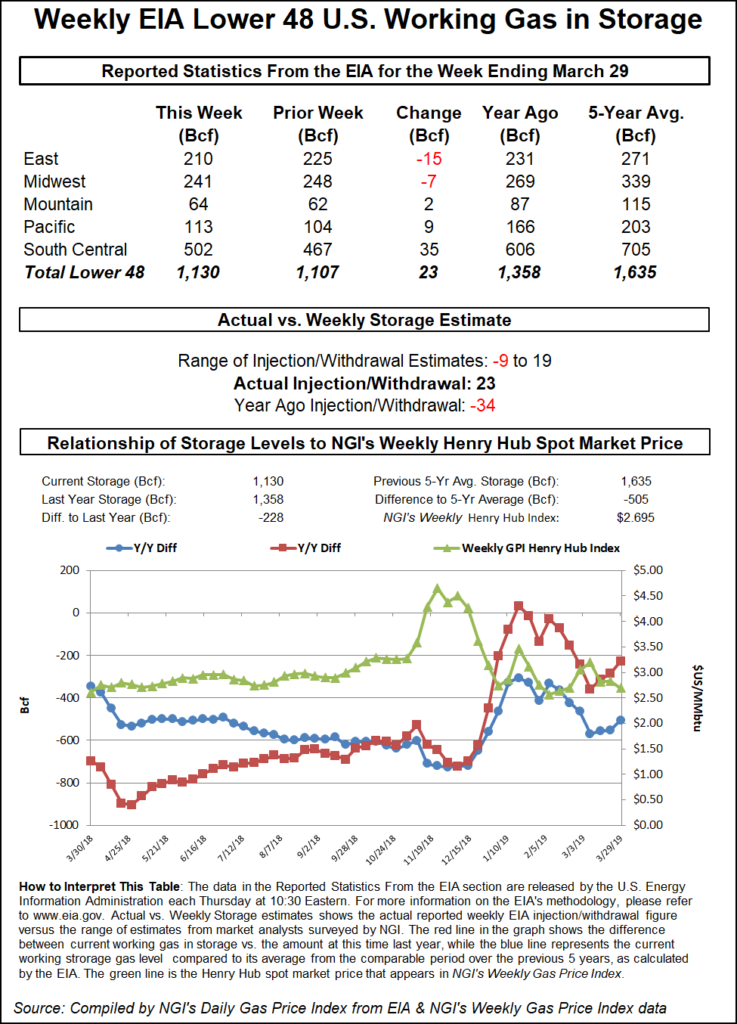 Cash prices were mixed Thursday, although most gains paled in comparison to losses sustained across the country as an exceptionally comfortable U.S. weather pattern is expected to linger through early next week, sending national demand to extremely light levels for this time of the year. Boosted by a sharp rebound in Permian Basin prices, the NGI Spot Gas National Avg. went on to climb 33.5 cents to $2.390.

For a market dominated by weather, it was Thursday’s EIA storage report that had traders’ attention. The EIA reported a 23 Bcf build — the first of the injection season — into storage inventories for the week ending March 29. The build compared to a year-ago 34 Bcf withdrawal and a five-year average draw of 23 Bcf.

Market reaction was swift as prices had been holding within a penny of Wednesday’s settle and then dropped about 2 cents after the print hit the screen. Prices continued to trickle lower for the remainder of the morning before stalling by midday.

Bespoke Weather Services, which had projected a 15 Bcf build, said the print reflected a very loose supply/demand balance for the week reported and puts the market well on track to make up the storage deficit versus last year during the next three weeks.

Still, “we continue to lag well behind the five-year average,” Bespoke Weather Services chief meteorologist Brian Lovern said. “Data this week continues to look quite loose as well, although with prices heading lower, we suspect that balances can finally begin to improve over the next several days.”

Ahead of the EIA report, major surveys showed the largest estimated build at 16 Bcf, although most estimates were near a 10 Bcf injection. As it often has, the South Central region surprised to the upside as the region reported a 35 Bcf build, including 19 Bcf into salt facilities and 18 Bcf into nonsalt, according to EIA. Several analysts had noted ahead of the report that the South Central region, in particular the salt facilities, held the most risk week/week.

“Texas, Louisiana and Mississippi have a ton of intrastate storage that you can’t see, so there is a huge variance to estimates if the interstates and intrastates do something different,” said IAF Advisors’ Kyle Cooper.

Meanwhile, weak pricing in the Permian Basin — where day-ahead trading had set new record lows prior to Thursday’s rebound — will likely incentivize larger builds. “Buying negative gas certainly makes a storage operator happy. The massively discounted prices started this week, so that will be reflected next week,” Cooper said on Enelyst, an energy chat room hosted by The Desk. “Negative Permian prices are going to do some interesting things.”

In addition to Permian prices’ impact on storage, nuclear generators could also be affected, especially as demand in the South Central region remains paltry. Wind generation is also higher.

Outside of the South Central region, the East withdrew 17 Bcf out of storage, while the Midwest pulled 7 Bcf. The Pacific injected 9 Bcf, and the Mountain region added 2 Bcf, according to EIA.

With the large South Central build surprising well to the upside, the impact of continued price weakness in the Permian is something analysts will be monitoring in the weeks ahead, especially as higher crude oil prices, which briefly rose above $70/bbl on Thursday, will likely keep oil drilling activity — and thus associated gas production — strong in the basin. Already, Permian production hit a new daily high of 9.4 Bcf/d in late March, and while it trended lower over the last week at around 8.8 Bcf/d, it remains near the February/March average, according to Jefferies Equity Research.

Total U.S. production has also ramped higher in recent weeks, with March production averaging 86.6 Bcf/d, a new high, Jefferies said. The first half of March averaged 85.9 Bcf/d, in line with January (85.5 Bcf/d) and February (86.0 Bcf/d), but climbed higher in the back half of the month, averaging 87.3 Bcf/d. Higher production in the second half of March was driven by the Permian (+370 MMcf/d), Appalachia (+210 MMcf/d) and production outside major basins (+540 MMcf/d).

And while Thursday’s EIA data was supportive of projections that lagging inventories will be replenished in earnest this summer, roughly 2.6 Tcf will need to be injected to reach normal storage levels of around 3.7 Tcf by the end of October. This would be near the highest record injection of 2.65 Tcf recorded in the summer of 2014, when gas prices averaged near $4.20, and higher than the five-year average of 2.0 Tcf, according to Jefferies.

Meanwhile, strong weather systems with greater coverage are expected to sweep across the western, central and northern United States April 11-18, sending demand back to at least seasonal norms. The potential for some late-season cold was likely behind the midday stall in the Nymex futures strip, although analysts generally see more downside risk for prices in the weeks ahead.

Midwest markets slipped only a few pennies at best, while some Midcontinent pricing hubs plunged by the double-digits. OGT next-day gas dropped 18.0 cents to $1.505.

NGPL Midcontinent spot gas slipped less than a nickel to $2.430 as a force majeure on the Natural Gas Pipeline Company of America (NGPL) system is set to begin Friday, limiting flows to zero though Compressor Station 156 in Kiowa County, OK.

“This will translate to a 150 MMcf/d reduction of Midcontinent gas traveling towards the Gulf Coast,” Genscape Inc. natural gas analyst Matthew McDowell said.

According to NGPL, the multiple pipeline remediation efforts will be broken into phases that span nearly two months and shut in numerous points throughout this period. The six points shut in for Phase 1 of pipeline remediation have a combined average of 2 MMcf/d for the last 30 days. “Two analogous events, in 2017 and 2018, both saw flows reduced to zero with no effect on NGPL Midcontinent prices, however, both events lasted only seven days,” McDowell said.

Texas cash prices were similarly higher, although West Texas points posted much more substantial gains after El Paso Natural Gas (EPNG) lifted the force majeure that had been in place since March 18 at the Lordsburg Compressor Station Unit 1C in New Mexico.

Next-day gas at Waha jumped $5.215, but prices still averaged in negative territory at minus 53.5 cents.

The weak pricing environment in the Permian is likely to continue as no incremental capacity is expected until an interconnect on Mexican developer Fermaca’s Wahalajara system goes into service in May, which could allow roughly 400-500 MMcf/d of additional West Texas exports, according to Jefferies. KMI’s Gulf Coast Express is expected to add another 2 Bcf/d of takeaway capacity in October, “meaning that very low pricing is likely to persist in the near term.”

The firm’s conversations with exploration and production (E&P) operators have mostly indicated those companies price gas at Waha on an average for the month, and that it makes up a small portion of total revenues.

Meanwhile, flaring gas is an option in the Permian but typically occurs at the wellhead, where the producer also loses the value for natural gas liquids. “While we have not heard of any E&Ps flaring at the tailgate of a processing plant, we believe E&Ps could potentially look to do this if negative pricing persists,” Jefferies said, noting that this type of flaring would require a permit from the Texas Commission on Environmental Quality, not the Texas Railroad Commission.

Texas tends to be one of the leading states in terms of controlling gas flaring, “so any marked increase in flared gas out of Texas really does represent something of an extreme situation,” according to Patrick Rau, NGI’s director of strategy & research.

Spot gas across Louisiana barely budged but ended the day on the positive side of the ledger, as did markets in the Southeast.

On the pipeline front, Southeast Supply Header (SESH) on Saturday is expected to begin two simultaneous outages that will shut in significant deliveries and restrict capacity through its mainline. First, the pipeline operator will conduct an outage on its 36-inch diameter line between its Lucedale, MS, compressor station and the end of the line in Mobile Bay, AL, through April 9.

Additionally, mainline capacity will be limited by as much 150 MMcf/d through the Delhi, Gwinville and Lucedale compressor stations through April 10. The first outage will shut in SESH’s interconnects with Transcontinental Gas Pipe Line and Gulfstream Natural Gas System, as well as the Theodore Plant and Plant Daniel meters.

“These locations have averaged 830 MMcf/d and maxed at 900 MMcf/d over the last 14 days, and they will likely remain affected through April 10 for the last day of mainline maintenance,” Genscape analyst Josh Garcia said.

This is Gulfstream’s largest supply point by far, but it can compensate for lost volumes via Transco, Gulf South Pipeline and Sabal Trail Transmission, according to Genscape. Plant Daniel can source alternative supply from Gulf South.