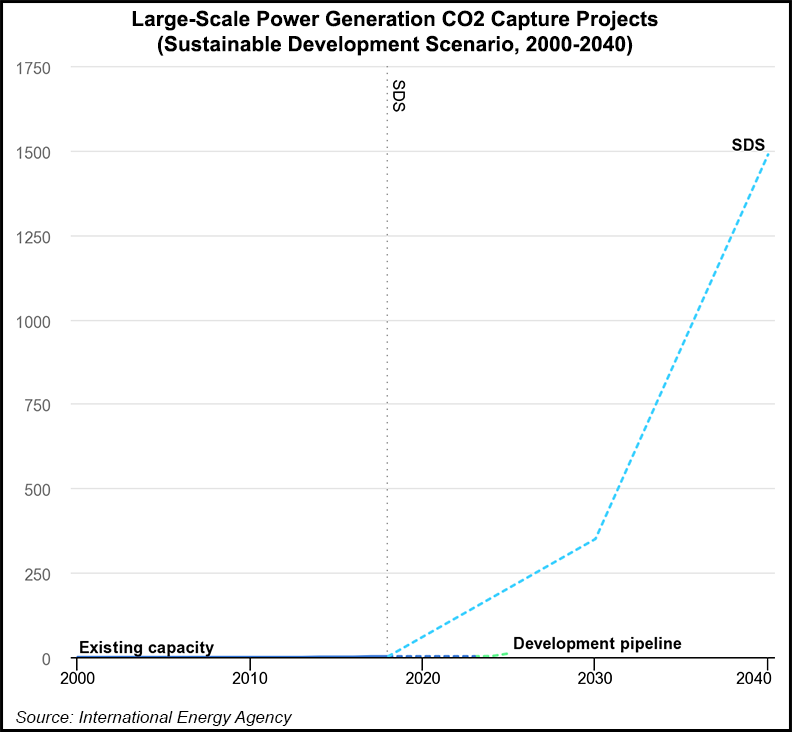 The project, which Starwood would develop with Elysian Ventures LLC, is expected to capture 90% of the facility’s carbon dioxide (CO2) emissions, which would then be used in enhanced oil recovery (EOR) and permanently sequestered in an existing oilfield. The project will seek to use Section 45Q tax credits, which the Internal Revenue Service offers on a per-ton basis for CO2 that is sequestered. The tax credit for CO2 used in EOR was $20/metric ton from 2008-2018, but is scheduled to increase to $35/metric ton by 2026, according to a Department of Energy fact sheet.

“We believe that the deployment of large-scale carbon capture for enhanced oil recovery is a unique opportunity to further enhance the value of critical power infrastructure, enabled by historically low natural gas prices and incentives for carbon sequestration,” said Starwood CEO Himanshu Saxena. “Once constructed, this will become a premium asset and showcase for the deployment of this technology.”

It would be one of the first large-scale carbon capture, utilization and storage (CCUS) projects to be integrated with a natural gas power plant, according to Starwood.

OGCI CI is a $1 billion-plus fund backed by the Oil and Gas Climate Initiative that invests in solutions to decarbonize sectors such as oil and gas, industrials, and commercial transport.

OGCI CI’s chief executive, Pratima Rangarajan, said the project and the fund’s three other CCUS project investments aim to keep over nine million metric tons/year (mmty) of CO2 out of the atmosphere, equal to taking almost two million cars off the road.

Elysian, a project developer focused on the power and chemical sectors, has been seeking projects “that are financeable, replicable, and that will eliminate millions of tons of carbon emissions annually,” said co-founder Bret Logue, adding that the partnership with Starwood and OGCI CI “immediately puts us on the road to achieving that goal.”

A Starwood spokesperson told NGI that the location of the power plant and oilfield are not being made public at this time.

With investors demanding more accountability from oil and gas companies on their climate change mitigation efforts, operators such as Chevron Corp. and ExxonMobil Corp. have announced carbon capture initiatives in recent months.

In a 2019 report, the International Energy Agency said that only two large-scale CCUS projects in the power generation sector were in operation as of end-2018 with a combined capture capacity of 2.4 mmty, “meaning CCUS in power remains well off track” to reach the 2030 sustainable development scenario level of 350 mmty.