Permian Basin pure-play Laredo Petroleum Inc. reported disappointing initial results for a package of wells that went online late in the second quarter, but management expressed a more encouraging outlook for nearby wells. 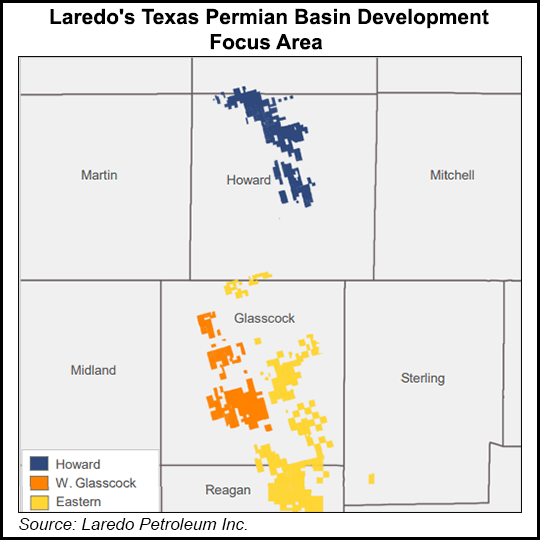 Among those wells, Laredo turned into line some Leech wells in the West Texas Spraberry and Wolfcamp formations. The Leech wells comprise “six 15,000-foot wells in our most southeastern unit in Howard County,” said CEO Jason Pigott.

Pigott said the six-well package in the drilling spacing unit (DSU), a departure from the traditional practice of 12 wells/DSU, remained “in the flow-like stage” with the oil production ramp-up taking “much longer than the offset wells” and underperforming the company’s prior forecast.

“The Leech package has been on full back for a little more than two months and is still producing significant amounts of water in low oil production,” said Chandler. “We’re currently working on options to optimize our artificial lift strategy and evaluating other potential remediation strategies as we continue to watch and gain additional understanding of the well production over time.”

Citing “the abundance of offsetting well data” for central Howard County, Chandler said the rest of the development were west and north of the Leech wells, so “we do not believe in this impact of any of the 23 remaining locations in central Howard.”

Laredo’s Kyle Coldiron, development and production vice president, underscored that view. “Within the Leech DSU itself, the westernmost wells are the highest producing wells. As you move to the east, we see a higher water cut and lower oil production in the easternmost wells…”

Drilling and completion activities accounted for $112 million, or 81%, of the $138 million in capital expenditure (capex) in 2Q2022. All of the expenditures “were slightly above our expectations mainly due to a slight acceleration of operations associated with the timing of ongoing completions,” Chandler said.

About 25%  of the higher capital spending stemmed from “inflation, which was primarily related to diesel expenses running over 40% higher on average than our original estimates.”

At the end of March, management had warned of the potential impact of hard-to-predict diesel costs.The costs are integrated into the capex outlook for the rest of the year, said Chandler.

Given the positive FCF figure, Laredo plans to return capital to shareholders through a $200 million equity repurchase program and by repursing more than $40 million of equity and debt. The company bought back $9 million of shares and $32 million of debt during 2Q2022.