Laredo Petroleum Inc. was expecting by Tuesday to restore most of the crude oil production shut in over the weekend following a fire at a West Texas tank battery in the Permian Basin. 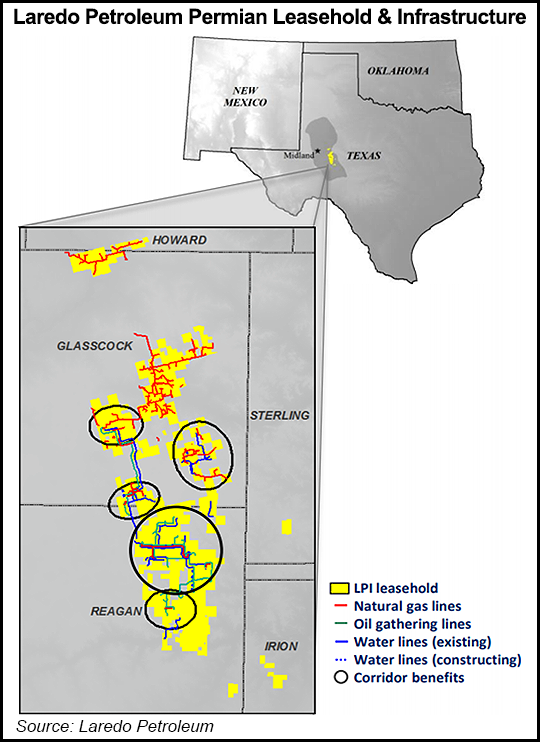 No injuries were reported following the incident last Saturday in Glasscock County; the fire was extinguished the same day.

Operations personnel were alerted by Laredo’s supervisory control and data acquisition, i.e. SCADA, system “and were able to quickly respond and shut-in the producing wells, limiting the amount of oil consumed by the fire,” according to the Tulsa-based producer, a Permian pure-play.

“We are very thankful that no injuries resulted from this incident and appreciate the quick response and professionalism of the first responders,” said CEO Randy A. Foutch. “While incidents such as these can never be anticipated, they can be planned for. Our protocols for responding to alerts in the field accelerated our assessment of the situation and, combined with past field infrastructure investments, enabled the return of significant amounts of shut-in production in a short period of time.”

The area is part of Laredo’s acreage dedication to the Medallion Gathering & Processing LLC, “thus the amount of oil in the storage tanks was minimized as it was directly tied by gathering pipelines to the Medallion system.”

The cause of the fire is being investigated, “although initial indications are the fire was caused by a lightning strike. The company is working closely with the relevant parties to gather all pertinent facts.”

Laredo operations personnel soon after the incident began assessing the condition of production facilities and alternatives for reestablishing production.

“At the time of the incident, wells flowing into the battery were producing approximately 5,100 b/d net,” Laredo said. The wells sustained no damage, and the company expected to restore about 70% of the shut-in production beginning Tuesday and 90% by next week.

Laredo reiterated its previous guidance for oil production growth in 2018 of 10% year/year, with total output rising 12%.

Houston-based Keane Group Inc. said one of its hydraulic fracture fleets was involved in a fire, “resulting in damage to a portion of the fleet.” The expense of replacing the damaged equipment is expected to be covered by insurance.

“We are working closely with our customer to ensure continuity of operations, and anticipate promptly resuming work with no material impact from this incident,” CEO James Stewart said.