Permian pure-play operator Laredo Petroleum Inc. said it increased production by more than one-third and slashed production costs during the second quarter. Meanwhile, the company plans to sell a chunk of its non-operated assets to fund additional drilling in the Wolfcamp formation before year’s end. Laredo also has increased its capital expenditures (capex) budget by 25% to grow a crude oil pipeline system. 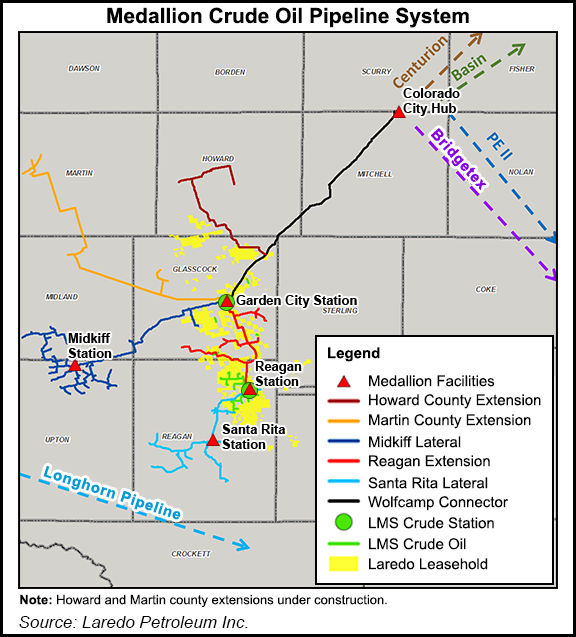 The company completed 21 horizontal wells during 2Q2015, with an average working interest (WI) of approximately 72%. Of those 21 wells, 10 targeted the Upper Wolfcamp formation and six were drilled into the Lower Wolfcamp. Another five wells targeted formations under the Wolfcamp — four into the Cline formation and one into the Canyon formation.

Laredo is currently operating four horizontal rigs, two of which were added to drill an 11-well project in the company’s Reagan North Corridor. The wells will be drilled with 10,000-foot laterals from multi-well pads targeting the Upper and Middle Wolfcamp zones. The company said it expects to complete the wells late in 4Q2015, and achieve a full quarter of production during 1Q2016.

“We know that we have a number of zones and a very thick section to look at,” CEO Randy Foutch said during a conference call Thursday to discuss 2Q2015. “The 11 wells that we’ve added to the budget…are kind of a bet on the efficiencies of our corridor in some ways. But our infrastructure already in place allows us to pretty efficiently drill those wells and complete them toward the end of the year.

“We really haven’t distinguished a favorite between the Upper and Middle [Wolfcamp], but that’s where we’re going to be drilling those additional wells.”

During 2Q2015, Medallion Gathering and Processing LLC — which is 49% owned by Laredo Midstream Services LLC (LMS) — conducted its first full quarter of operations of the Medallion pipeline system. According to Laredo, Medallion shipped approximately 3.1 million bbl of oil (35,000 b/d) in 2Q2015, including more than 38,000 b/d in June. Based on nominations for 3Q2015, Medallion is expected to ship approximately 5.4 million bbl in 3Q2015 (60,000 b/d), with the September nomination expected to exceed 80,000 b/d.

Laredo spent approximately $114 million in exploration and development activities during 2Q2015, and about $38 million on pipelines and related infrastructure assets held by LMS. The company’s board of directors agreed to increase the capex budget for full-year 2015 to $595 million to fund additional drilling during 2H2015 and more investments in the Medallion pipeline system. Medallion is currently more than 400 miles long with more than 290,000 net acres dedicated to the system. More than 1.1 million acres are either under an area of mutual interest or supporting firm commitments to the pipeline.

“The growth is being driven by the recognition of operators in the basin that Medallion is uniquely positioned to transport oil to multiple markets and provide optionality in marketing crude oil at the most price-advantaged delivery points,” said Daniel Schooley, senior vice president for midstream and marketing.

According to Laredo’s slide presentation for 2Q2015, the company holds 179,713 gross (149,921 net) acres, most of which is contiguous. Its leasehold is located exclusively across six counties in West Texas: Glasscock, Howard, Irion, Reagan, Sterling and Tom Green.

Laredo announced on Aug. 3 that it would sell approximately 5,882 non-operated net acres in Glasscock and Reagan counties to an undisclosed buyer for about $65 million. Proceeds from the sale, which is expected to close by the end of 3Q2015, are expected to fund the 11-well project in the Reagan North Corridor.

In a note Thursday, Topeka Capital Markets said it thought Laredo’s performance during 2Q2015 was mixed.

“Laredo is doing a great job weathering through the down-cycle [in commodity prices], by enhancing margins through lower well costs, longer laterals and greater efficiencies in operations,” said Topeka’s Gabriele Sorbara. “This drove Laredo to accelerate with multi-pad development on its production corridors.

“While we would prefer to see Laredo (and the industry) hunker down to preserve capital at the current 12-month strip prices, the additional 11-well pad program [in the Reagan North Corridor] does not come online until early 2016.”