U.S. Sen. Mary Landrieu (D-LA) has appealed again to FERC to deny American Midstream Partners LP’s request for authorization to decommission the Midla pipeline in her state, saying the company has failed to explain “a precipitous drop in maintenance spending” and made “a cynical effort” to enlist federal safety regulators in its cause. 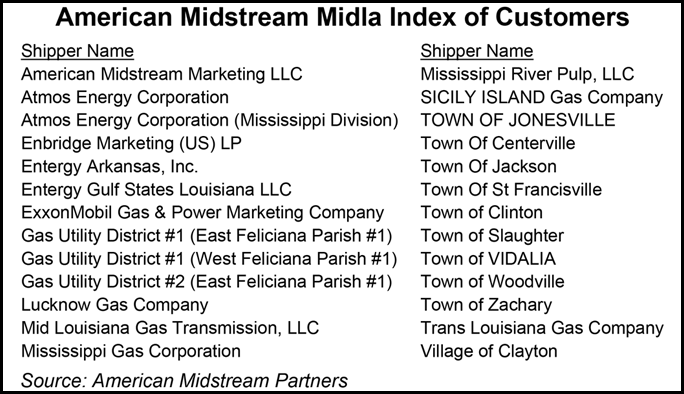 In March, Denver-based American Midstream announced plans to abandon the Midla system after negotiations with customers over repairs to the pipeline broke down and the company said it didn’t receive any interest in an open season (see Daily GPI, March 13). On March 28, the company filed an application [No. CP14-125-000] with the Federal Energy Regulatory Commission to abandon the pipeline.

If the pipeline abandonment is allowed, “…the result will be a termination of affordable natural gas service to tens of thousands of customers in nine parishes in Louisiana: Franklin, Catahoula, Ouachita, Richland, Tensas, Concordia, West Feliciana, East Feliciana and East Baton Rouge,” Landrieu wrote in her latest letter to LaFleur.

The 370-mile Midla pipeline system was built in 1926, traverses Louisiana and Mississippi, and was designed to move gas from the then-prolific Monroe Gas Field in Ouachita Parish, LA, to a Standard Oil (now ExxonMobil Corp.) refinery in Baton Rouge, LA. In the early to mid-1970s, the system carried up to 300 MMcf/d. The mainline consists of 16- to 22-inch diameter pipe.

“…[T]o the extent Midla pipeline safety risks may be increasing in recent years, this is, at least in part, a problem of Midla’s own making,” Landrieu wrote. “…If there is, as Midla claims, ‘a difference in classification’ in certain years that makes the maintenance costs numbers submitted previously by Midla inaccurate, then Midla must go back and correct the record…Midla needs to quit stonewalling and start cooperating so the key facts are known to all stakeholders.”

In her letter Landrieu also cited excerpts from a series of emails dated from late February to mid April among American Midstream executives, a Pipeline and Hazardous Materials and Safety Administration (PHMSA) staffer, a consultant to American Midstream and one of its lawyers.

“These emails speak for themselves,” wrote Landrieu, “and reveal a cynical effort by Midla to use the safety issue as a tool to force the abandonment of the Midla pipeline.”