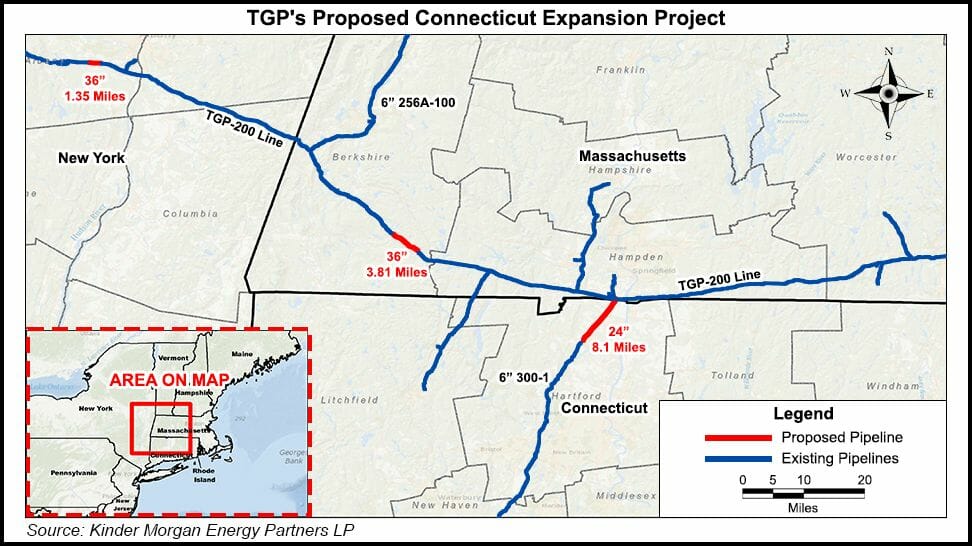 Meanwhile, the Federal Energy Regulatory Commission has asked TGP for additional information before it decides whether to issue a partial notice to proceed with tree felling.

FERC approved TGP’s plans earlier this month (see Shale Daily, March 15). The project [CP14-529] calls for augmenting the pipeline’s existing system in three states (New York, Massachusetts and Connecticut) and expanding delivery capability to the northeast by up to 72.1 MMcf/d.

In a letter to FERC on Friday, the group Sandisfield Taxpayers Opposing the Pipeline (STOP) contends that under the federal Clean Water Act (CWA), TGP must receive certification from the Massachusetts Department of Environmental Protection (MassDEP) before conducting the tree clearing. STOP also called TGP’s position that it doesn’t need permits or permission from federal agencies — specifically, the Army Corps of Engineers (USACE), the Environmental Protection Agency and the Fish and Wildlife Service (FWS) — to proceed “misleading at best.”

STOP asked FERC to issue a stay for the entire project on March 17. TGP responded five days later, arguing that a stay “is simply not in the public interest,” and stating that it has fully complied with the environmental conditions FERC attached to its order.

On Friday, Elaine Baum, environmental project manager for Gas Branch 1 at FERC’s Office of Energy Projects, asked TGP to clarify that the company would not cut trees “in areas where it has not obtained an easement or purchase of property from the landowner(s) or land managing agency,” and to provide a list by milepost where TGP is requesting to cut trees. She also asked TGP to identify any private access roads that the company is requesting to use and confirm that it has permission to use them.

Baum also asked TGP to provide a revised project schedule to reflect tree felling activities on or before the March 31 deadline for applicable species regulated by the FWS, and to provide evidence that MassDEP, the Connecticut Department of Energy and Environmental Protection, and the New York and New England field offices of the USACE all concur that CWA permits are not required for the non-mechanized tree felling activities to support the project.

The project calls for the construction of three pipeline loops totaling about 13 miles on the pipeline’s existing 200 and 300 Lines. Modifications would also be made to an existing compressor station in Hampden County, MA. Appurtenant facilities would also be installed along the mainline loops. TGP said it has binding precedent agreements with three anchor shippers — Connecticut Natural Gas Corp., Southern Connecticut Gas Co. and Yankee Gas Services Co. — for all of the project capacity. Construction is expected to be completed this fall.