The Laclede Group revealed plans Wednesday to build a 60-mile, 24-inch diameter lateral in Missouri and Western Illinois that would interconnect with the Rockies Express (REX) and Panhandle Eastern pipelines. 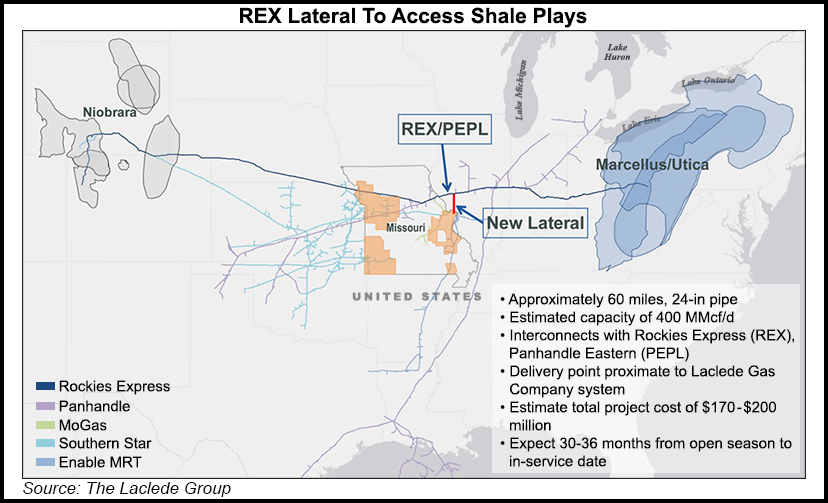 In a quarterly earnings call with analysts Wednesday, Laclede CEO Suzanne Sitherwood described the north/south pipeline project as an effort to improve “physical resiliency, reliability and diversity of supply while accessing lower cost shale gas” moving west on REX out of the Marcellus and Utica shales.

“Given the abundance and low cost of shale gas and the shift in pipeline flow, we believe that there are opportunities across our footprint,” Sitherwood said. “Our initial focus has been to modernize our gas supply portfolio into eastern Missouri service territory.”

The pipeline would move about 400 MMcf/d and cost roughly $170-200 million, Sitherwood said, adding that the company is “not in a position to discuss our investment in detail, including the ownership structure for the project.”

REX, backed by Tallgrass Energy Partners, is a 1,698-mile, 1.8 Bcf/d interstate transmission line stretching from Colorado and Wyoming to eastern Ohio. The project, which became operational in November 2009, developed bi-directional capability in response to the emergence of production out of the Appalachian Basin. The Panhandle Eastern Pipeline runs from Texas and Oklahoma to Michigan and is part of a 2.8 Bcf/d system of pipelines operated by Energy Transfer Partners LP subsidiary Panhandle Eastern Pipe Line Co. LP.

Sitherwood told analysts Wednesday that Laclede has run “a variety of scenarios of what a transaction might look like in terms of partner percentages, all the different assumptions that you might imagine, because we want to make sure this project is solid under any scenario, and it is, quite frankly.”

The project is estimated to be in service in 34-36 months, she said.

Laclede reported a decreased operating margin during the quarter because of temperatures that were roughly 32% warmer year/year in its service areas, “resulting in lower system sales volumes including from a delay in re-connecting seasonal customers.” This was offset by lower operating expenses during the quarter, the company said.

Fueled by stubbornly mild weather and an improved supply outlook, North American natural gas prices fell more than $1 from Monday to Wednesday and closed in on the $4.00/MMBtu mark for the first time since early summer. Even as gas prices in Europe continue at record levels, the North American supply/demand and pricing picture has…