Attorneys have cited the absence of a safety valve in lawsuits on behalf of residents that have been dislocated by a two-month-old natural gas storage well leak in the northwest end of the Los Angeles San Fernando Valley (see Daily GPI, Nov. 19). 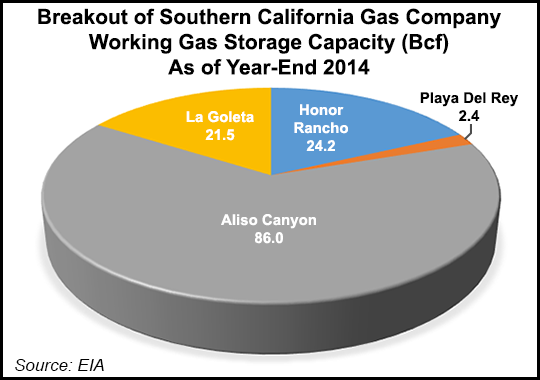 State and Southern California Gas Co. officials contacted by NGI Monday refused to talk about the valve, saying that the well was in full compliance with state safety requirements on Oct. 23 when the leak was discovered in the Standard Sesnon 25, or SS25 well. Officials in the Department of Conservation’s (DOC) Division of Oil, Gas and Geothermal Resources (DOGGR) said rules and safety inspections for underground gas storage facilities are likely to change in the future.

Both the Sempra Energy gas utility and the state have confirmed that SS25 has no subsurface valve. Attorneys for residents of the Porter Ranch development near the Aliso Canyon storage facility allege that the presence of a valve might not have prevented the leak, but it could have stopped fumes from the odorized gas from flowing to the community (see Daily GPI, Dec. 23, 2015).

In an amended filing against SoCalGas last Tuesday, attorneys allege that SoCalGas removed a subsurface valve at the 8,500-foot base of the leaking well back in 1979 and never replaced it. The company did not respond to this allegation, only saying that DOGGR has indicated “that well SS25 was in full compliance with its regulations at the time of the leak, and SoCalGas shares this view, and [we] will continue to cooperate with DOGGR as its compliance investigation continues.”

A SoCalGas spokesperson further confirmed that the leaking well “does not have a subsurface safety valve,” adding that DOGGR regulations do not require “these types of valves to be installed in wells such as SS25.”

Jason Marshall, DOC chief deputy director, told NGI that DOGGR requires annual inspections of gas storage facilities in the state; however, “we have an aging infrastructure, and some of the wells were constructed to standards that have since been updated, so we’re going to look at well construction standards and operations.”

“This well [SS25] was not constructed under the most recent requirements; we may need to increase the frequency of inspections for these kinds of vintage wells or consider different types of inspections,” Marshall said, adding that aside from the Aliso Canyon leak, this kind of regulatory evaluation had been contemplated by DOGGR in its renewal plan for assessing and streamlining the state’s oversight of the oil/gas industry.

The leak is not expected to be stopped before late February. DOGGR and the California Public Utilities Commission are overseeing a consulting firm that will complete an analysis of the well and the root causes for the leak.

“SoCalGas is cooperating fully in this effort,” the utility spokesperson said. “Until the facts are determined and this assessment is completed, it is premature to comment further on the well or the cause.”

Nevertheless, speculation about the causes and SoCalGas’ responsibility for the leak continue to circulate, particularly in local Southern California news media, such as the Los Angeles Times, which has published two front-page reports on developments surrounding the leaking well the past two days. Critics are emphasizing that the well is old, dating to 1954 as a producing oil well and 1973 as a well converted to gas storage. Its pipes are 61 years old, they point out.

Although there has been no major breakthrough in stopping the leak, as reported late last month, SoCalGas has succeeded in cutting in half the estimated volumes of leaking gas by reducing the overall pressure of the storage field (see Daily GPI, Dec. 29, 2015). SoCalGas has a goal of reducing that to 1,000-1,200 psi by the time its first relief well is finished. Previous pressures in the field were 2,700 psi.