A new study released by a regional coalition of business and labor groups warns that New England faces billions of dollars in economic consequences if more electricity and natural gas infrastructure is not built over the next five years. 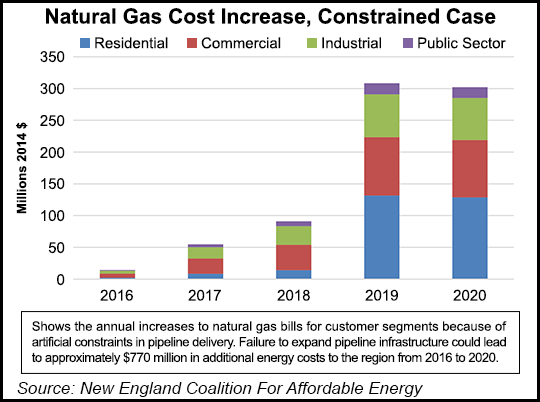 The New England Coalition for Affordable Energy was recently formed to help educate the region’s policymakers, elected officials and the public about the need for new energy infrastructure. The study was conducted by Boston-based La Capra Associates and the Economic Development Research Group. It was funded by both the American Petroleum Institute and America’s Natural Gas Alliance.

The study found that failure to expand the region’s infrastructure would lead to households and businesses paying $5.4 billion more for energy from 2016-2020. It could also result in a loss of disposable income of $12 billion and 167,600 jobs lost or not created, the study said, warning that those losses would only grow after the five-year period.

The coalition said that while previous studies have examined the region’s need for specific types of infrastructure or projects, its own study examined a wide array of infrastructure that could reduce energy costs, including natural gas pipelines, electricity transmission lines, and renewable and non-renewable electric generation. The large number of jobs losses quantified in the study result from the projected higher energy costs and the loss of additional infrastructure investment.

A number of projects have been proposed by multiple competitors to serve the Northeast’s undersupplied markets. Earlier this month, a report commissioned by liquefied natural gas supplier GDF Suez North America called a proposal to fund additional gas pipeline capacity in New England through an electricity ratepayer system “an expensive and dangerous proposition” (see Daily GPI, Aug. 18). That report dismissed claims that the reliability of natural gas and electricity in the region are at risk.

But the coalition said New England has already incurred $7.5 billion in energy costs over the past three winters due to natural gas pipelines reaching capacity in a struggle to meet electricity and heating demands. Higher energy costs alone would cause the region’s economy to lose 52,000 private sector jobs by 2020, according to the study.

Some infrastructure projects are already under way to help meet the region’s needs, but the coalition said “timely decision-making by regulatory and permitting agencies is necessary if the region is to achieve more affordable prices for consumers and improved competitiveness for employers.”