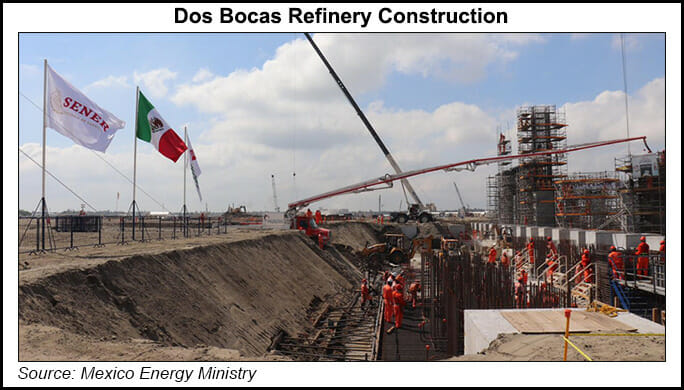 Workers reportedly are demanding better pay and working conditions before resuming work on the refinery, one of the flagship public works promoted by President Andrés Manuel López Obrador.

López Obrador downplayed the conflict during his morning press conference on Wednesday, calling the strike “momentary,” “transitory,” and “a matter between unions” working on the project.

ICA Fluor, a partnership between Houston-based Fluor Corp. and Mexico’s Grupo ICA, said Wednesday it has complied with all contractual, legal, salarial and safety commitments to its workers. Energy Minister Rocío Nahle endorsed the message on Twitter.

The company also said that Mexico’s national guard and navy were protecting federal facilities from protesters.

ICA Fluor, a longtime Pemex contractor, was awarded three contracts for $2.8 billion for the refinery during the first quarter.

While Mexico’s economy is bouncing back from its deepest downturn in decades, the highly indebted national oil company (NOC) remains a drag on public finances, said IMF staff following an official visit to the country to assess its economic and financial policies.

“Pemex’s losses are placing a burden on taxpayers and crowding out other more productive uses of fiscal resources,” IMF economists said Friday. “Past corruption scandals underline the critical importance of strengthening governance and procurement processes within the company.”

“National oil companies normally are providers of fiscal rents,” Palacio said. “What we’re seeing in Mexico is that the government is bailing out the national oil company, so it’s the opposite of what you want.”

She also expressed concern about ongoing attempts by López Obrador to roll back Mexico’s 2013 constitutional energy reform and consolidate state power over the energy sector, and around Pemex’s corporate governance more generally.

Improving governance is particularly challenging for Latin American NOCs, given their complex ownership structures, and the national and economic interests they must consider, Palacios said.

The IMF team, meanwhile, stressed that, “Partnering with private firms would leverage specialized expertise and help manage costs” for Pemex.

López Obrador has been an unwavering critic of the 2013 reform, which opened the state-dominated hydrocarbon and electricity sectors to private competition.

He has eschewed bid rounds and partnerships with international oil companies for a Pemex-first strategy targeting self-sufficiency in gasoline and diesel fuel.

To that end, his government has sought to upgrade Mexico’s existing refinery fleet and build the 340,000 b/d new facility in Dos Bocas, Tabasco state.Think tanks and credit rating agencies have questioned the project’s viability, and noted that the refining segment is a perennial lossmaker for Pemex.