Global investment firm KKR is buying a stake in a Sempra Energy business unit that manages liquefied natural gas (LNG) projects on the Gulf Coast and in Mexico as it anticipates growth in North American energy infrastructure. 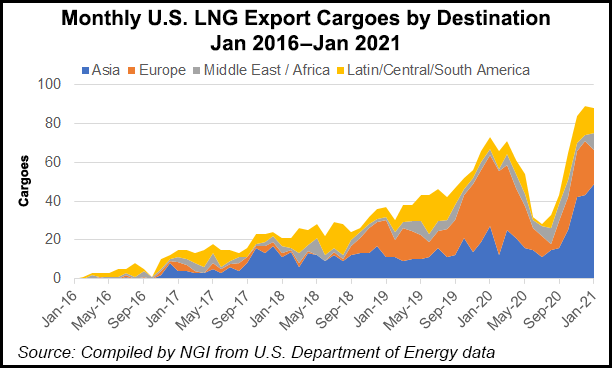 Under the terms of the deal announced Monday, KKR will pay  $3.37 billion for a 20% non-controlling interest in the Sempra Infrastructure Partners subsidiary.

“Over the next decade, we expect the energy markets in North America to continue to grow and become increasingly integrated,” Sempra CEO Jeffrey Martin said Monday. “Combining our resources with KKR improves our ability to capture new investment opportunities in cleaner forms of energy and the critical infrastructure that stores and transports it. This transaction also sends a clear signal about the value and expected growth of our infrastructure portfolio.”

San Diego-based Sempra said the deal values the infrastructure subsidiary at about $25.2 billion including debt of $8.37 billion. Closing is expected by mid-year.

Sempra Infrastructure Partners was formed in December. It combined the LNG unit with its Infraestructura Energética Nova (IEnova) subsidiary in Mexico. At the time, Sempra said it was looking to sell a minority stake in the business.

The infrastructure unit owns a 45 million metric tons/year LNG portfolio, which includes the operational 15 mmty Cameron LNG facility in Louisiana, which may be expanded. It is also developing the proposed 13.5 mmty Port Arthur LNG terminal southeast of Houston in partnership with an affiliate of Saudi Arabian Oil Co., aka Saudi Aramco, which may be sanctioned this year.

In Mexico, it is developing the Energia Costa Azul (ECA) export project in Baja California, which was the only LNG development in North America to be sanctioned last year. The first phase, with capacity of 2.5 mmty, is expected to come online in 2024.

The partnership also owns gas infrastructure, including pipelines to send U.S. feed gas to ECA, and a Mexican renewable energy portfolio of about 4 GW.

Sempra said proceeds from the sale would be used to “help fund growth” across its $32 billion capital program, which is focused on its U.S. utilities, and to “further strengthen” its balance sheet. The company said last month that it would target nearly 90% of capital investments this year in its three major utilities operating in California and Texas.

When Sempra formed the partnership in December, it also disclosed plans to launch a stock-for-stock exchange offer for the remaining shares of IEnova. Sempra anticipated in December it would finish the exchange by the end of March. On Monday, however, Sempra said it was still waiting for government clearance to begin the process.

Under the terms of the offer, Sempra would exchange one common share for an IEnova share at an exchange ratio of 0.0313. Sempra intends to list its exchange shares on Mexican stock exchange Bolsa Mexicana de Valores SAB de CV. The offer has an implied price of 82 Mexican pesos, or $4.08/IEnova share.