Kinder Morgan’s Tennessee Gas Pipeline (TGP) is making the most out of the booming production from the Marcellus Shale with multiple backhaul/reversal projects. Meanwhile, that booming production and the bitter cold winter drove record throughput volumes in the company’s gas pipeline segment. 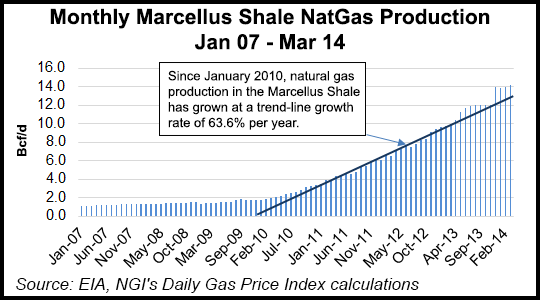 Kinder said the company’s pipelines “had extraordinary gas throughput during the first quarter, and we moved what we think is an all-time record for us, 33 Bcf/d during the month of January, on average. And that’s about 33%, about a third, of all the natural gas consumed in the United States during that month.”

During the quarter, TGP benefited from production growth in the Marcellus and Utica shales as well as a number of expansion projects that began service last November, Kinder said. El Paso Natural Gas throughput was up on increased exports to Mexico and market share growth in the Southwest, he said. “The Texas intrastates set an instantaneous delivery record of 6.1 Bcf/d on three separate days during the quarter.”

Back in Marcellus country, TGP recently awarded Antero Resources Corp. all of the capacity on its proposed Broad Run Flexibility and Broad Run expansion projects, which will move gas north to south (see Shale Daily, April 14).

And TGP’s Utica Backhaul project entered service April 1 to provide an incremental 500,000 Dth/d of north-to-south firm, fully subscribed capacity for Marcellus/Utica production from as far north as Mercer, PA, for delivery to multiple points on the Gulf Coast.

Also, TGP is continuing to work on a plan to move 900,000 Dth/d of gas to the proposed Cameron liquefied natural gas (LNG) export terminal in Hackberry, LA. TGP has made binding 20-year transport agreements with Mitsui and Mitsubishi for the capacity (see Daily GPI, July 17, 2013). Future shipments by TGP are part of a $138 million southwestern Louisiana supply project, which is expected to be in service during the fourth quarter of 2017.

Offering a way out of the Marcellus in the other direction, TGP recently completed two “successful” nonbinding open seasons for two projects to expand capacity into the Northeast. “…[T]he company is now working with shippers to move these expansion projects to the next level,” it said.

During last week’s conference call, a few analysts were particularly curious about how far TGP can actually go with moving gas the other way — out of the Northeast’s Marcellus to the south.

“…I think we certainly have the opportunity to look at more backhaul or southbound capacity,” said Tom Martin, president of Kinder’s natural gas pipelines. He added that if the company’s planned southbound natural gas liquids project does not move forward, some of the capacity earmarked for that could instead be used to move more gas southward.

“We’re also very excited about results of the nonbinding open season to take additional Marcellus gas ultimately into New England,” Martin said. “Between those two projects, we could see anywhere from 1 to 1.2 Bcf/d incremental volumes going into the New England market. So we think both from the demand that we’re seeing southbound as well as the interest to go, to bring additional volumes into New England, we’re very excited about our growth prospects going forward.”

Martin said the market will determine the extent to which Tennessee capacity is ultimately reversed. “…[I]t all depends on what rates the market ultimately will bear, but I think all the, relatively speaking, the lower-cost expansion projects have been done, but I think we’re continuing to see interest even at higher level, so it’d get hard to speculate on volumes, but I think we’re certainly talking to our customers every day and there is still interest for more capacity.”

The next most cost-effective place to move Marcellus gas on TGP via capacity expansion is likely New England, Rich Kinder said, as opposed to the Gulf Coast. He said that with Marcellus production trekking toward 15 Bcf/d and more this quarter and with summer’s lower demand in the Northeast, the Marcellus gas will have to go somewhere, this year and in the years ahead. As production grows further, there will be opportunities for more reversals of legacy assets. But the low-hanging fruit has been picked.

“…[T]he further you get, the more expensive it gets and we’ll just have to see are there people willing to pay freight. But obviously there is a tremendous need for more capacity to get natural gas as well as NGLs out of Marcellus/Utica,” Kinder said

On the liquids side of the Marcellus ledger, the company is still working on developing its y-grade pipeline out of the region to the Gulf Coast, but that project hasn’t gained enough traction yet to be included in the company’s backlog of projects, Rich Kinder said.

“Yes, we continue to work on it, but we don’t have commitments yet. So we are not putting it in the backlog [of projects],” he said, adding that producers appear to have been more focused on getting their dry gas out of the Marcellus and will be turning their attention to liquids outlets.

…”I would say that the interest in the [NGL] project continues to grow,” he said. “So the update for the quarter is people are interested and more interested than they were the quarter before. But until that turns itself into signatures on contracts again it’s not going in the backlog and we’re not going to call it done.”

Speaking of the project backlog, Kinder’s has grown to projects worth a combined $2.6 billion, doubling from $1.3 billion in January. “Since Dec. 1, 2013, we have entered into new firm transport capacity commitments for 2.3 Bcf/d, with the great majority of this capacity expected to come online between 2014 and 2017,” Kinder said.

“A significant portion of this capacity is to transport natural gas from the Marcellus and Utica shale plays to growing demand centers on the Gulf Coast. Additional opportunities include the need for more capacity in the Northeast, demand for gas-fired power generation and exports to Mexico.”

Since January 2010, natural gas production in the Marcellus Shale has grown at a trend-line growth rate of 63.6% per year.