The fourth quarter marked the second in a row that Kinder Morgan Inc. (KMI) took a writedown on natural gas pipeline assets. Revenue was down, again, on lower oil/natural gas throughput, but adjusted earnings were in line with Street expectations. 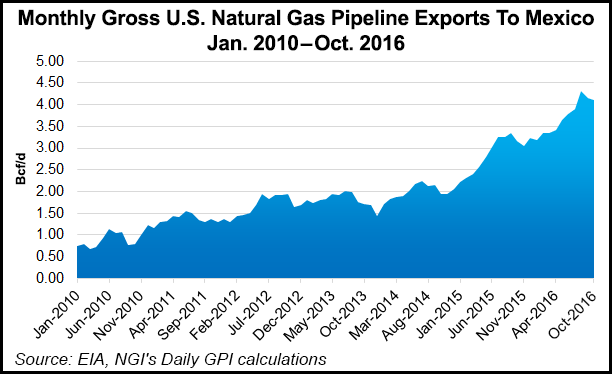 The project backlog declined to $12 billion from $13 billion in the third quarter, mostly because of project completions, CEO Steve Kean said, as well as some project high-grading. Capital markets were left untouched.

Adjusted earnings before interest, taxes depreciation and amortization (EBITDA) of $1.83 billion was better than Jefferies analysts expected ($1.79 billion), they said in a note, and better than the Street’s expectation of $1.82 billion. DCF also beat Jefferies ($1.1 billion) and Street ($1.12 billion) estimates.

KMI took a $250 million writedown during the quarter on its investment in the Ruby Pipeline as West Coast natural gas demand growth expectations have been pushed back “to beyond 2021.” During the third quarter, KMI took a writedown on Midcontinent Express Pipeline.

Compared with the year-ago quarter, natural gas transport volumes were down by 2% as increased Canadian imports into the Pacific Northwest forced down throughput on westbound Ruby. The Texas Intrastate Natural Gas Pipelines segment also saw diminished throughout because of lower Eagle Ford Shale volumes. Lower production from the Rockies caused throughput declines on the Wyoming Interstate Co. and TransColorado pipelines.

But Tennessee Gas Pipeline (TGP) saw increased throughput from projects entering service. And Natural Gas Pipeline got a throughput boost from increased deliveries to Cheniere Energy’s Sabine Pass liquefied natural gas (LNG) terminal in Louisiana and from increased gas demand in Mexico. Kean told analysts during a conference call that TGP “…continues to be a system that grows in value. The return of growth in the Marcellus and Utica will just drive that further. It’s participating in Mexico market demand expansion; it’s participating in LNG markets expansion; and it’s participating in the power sector…“

KMI said it expects future natural gas infrastructure opportunities will be driven by greater demand for gas-fired power generation across the country, LNG exports, exports to Mexico and continued industrial development, particularly in the petrochemical industry. Natural gas deliveries on KMI pipelines to Mexico and LNG facilities were up 17% to 407,000 Dth/d and 458,000 Dth/d, respectively, compared to the fourth quarter of 2015.

Natural gas gathering volumes were down on multiple systems (21%), KMI said, blaming, in part, output declines in the Eagle Ford. As during past quarters, debt reduction was a priority at KMI.

“For the year, we substantially reduced our debt, further positioning Kinder Morgan for long-term value creation,” said Chairman Rich Kinder. “We finished ahead of our plan for 2016 year-end leverage, and we are pleased with the progress toward reaching our targeted leverage level of around 5.0 times net debt-to-adjusted EBITDA.

“This will position us to return substantial value to shareholders through some combination of dividend increases, share repurchases, additional attractive growth projects or further debt reduction. We are also seeing green shoots in our sector, based on the expected balancing of global crude oil supply and demand combined with expectations for a more positive federal legislative and regulatory environment.”