With oil production booming in the Permian Basin of West Texas, projects are being developed to serve producers wanting to get their oil to Houston. But going west on a converted portion of Kinder Morgan’s El Paso Natural Gas (EPNG) system could one day be an option, too. 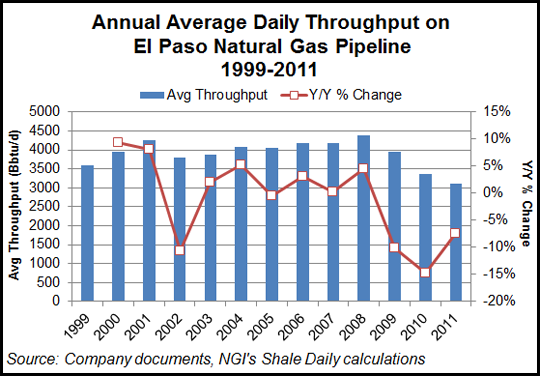 “…[W]e continue to look at the potential to use portions of that [EPNG] system to convert it to other uses, perhaps moving crude oil west from the Permian Basin,” Kinder Morgan CEO Rich Kinder told financial analysts during an earnings conference call Wednesday. “That’s very speculative at this point, but there are a lot of opportunities.”

Asked to elaborate on the idea, Kinder said, “we would not be converting all of it” to oil. An oil conversion project would still allow gas transportation customers to be serviced “at the present level of demand or whatever throughput they want to sing up for.”

With multiple pipes running from the Permian to Southern California, Kinder could convert a portion of EPNG to oil service and still move gas as well.

“The volumes could be very substantial, maybe 300,000 or 400,000 b/d,” the CEO said. “…[W]e have had some interesting conversations with potential shippers on that line who are very enthusiastic. What we’re seeing is there’s continued increase in production in the Permian, particularly as these different stands are being exploited there.

“…[T]here’s a lot of effort on a lot of people’s parts to move this over to Houston,” he said, adding that Kinder Morgan is looking at doing this, too. However, “given the dichotomy in prices between California and Texas, there’s certainly some real interest, at the right price, under the right conditions, to move oil to the West.

“Again, it’s all speculative at this point but kind of interesting to think about.”