Kinder Morgan natural gas pipelines and related assets are benefiting greatly from rapidly expanding gas production in the Appalachian Basin and the need to get that production out, particularly to Gulf Coast liquefied natural gas (LNG) export terminals. 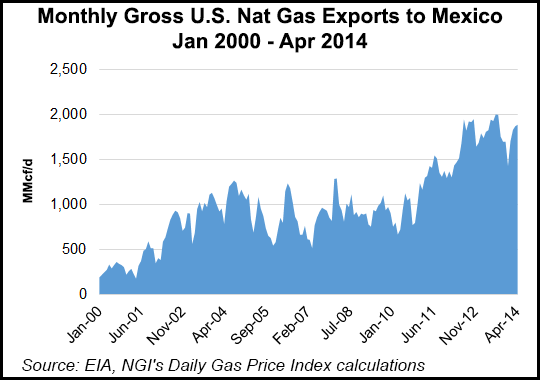 “Further, we have another approximately 1.7 Bcf/d of pending transactions, the majority of this 1.7 is related to third-party LNG facilities, all of which are credible LNG export projects. These LNG commitments, together with another approximately 300 MMcf/d of other pending commitments, would bring the total long-term firm capacity signed up across Kinder Morgan’s gas pipelines to approximately 5.3 Bcf/d since the beginning of December. To put that into context for you, that represents over 7% of the current daily U.S. natural gas demand. So it’s a very significant, very important number.”

Kinder noted the disconnect between where all the new natural gas is, primarily Appalachia, and where it needs to be, primarily the Gulf Coast for export as well as to serve industrial/petrochemical and power generation demand. “…[That leads to great opportunities, we believe, at Kinder Morgan, where we move about one-third of all the natural gas consumed in the United States through our 70,000 miles of natural gas pipelines,” Kinder said.

He added that the U.S. Energy Information Administration in recent days said that Marcellus production is expected to be 15.5 Bcf/d in August and is expected to surpass the output of Qatar in September. “Qatar is the world’s third-largest producer of natural gas. I think that gives you an idea of the production ramp-up that’s occurring in the Marcellus,” Kinder said. Additionally, a recent study from the INGAA Foundation estimated that it will take $114 billion to build the natural gas infrastructure that will be needed between now and 2020, Kinder said.

KMP’s Tennessee Gas Pipeline (TGP) has been in high demand due to Marcellus growth, Kinder said. Second quarter earnings benefited from a number of TGP expansion projects that came online late last year, in addition to the pipeline’s Utica Backhaul project, which entered service in April.

Market conditions continue to support the view that natural gas is the future play for America’s energy needs, with certain industry experts projecting gas demand increases of about 35% over the next 10 years from approximately 74 to 100 Bcf/d, according to Kinder.

“Our backlog of expansion and joint venture investments at the Kinder Morgan companies that have a high certainty of completion has grown to $17 billion, up from $16.4 billion at the time of our April earnings release,” Kinder said. “It is important to note that this increase takes into account approximately $700 million in projects that we placed into service in the second quarter, which means we have added about $1.3 billion to the backlog.

“More than $4.6 billion of the projects in our backlog are natural gas projects, and there continues to be tremendous demand for gas transportation capacity.”