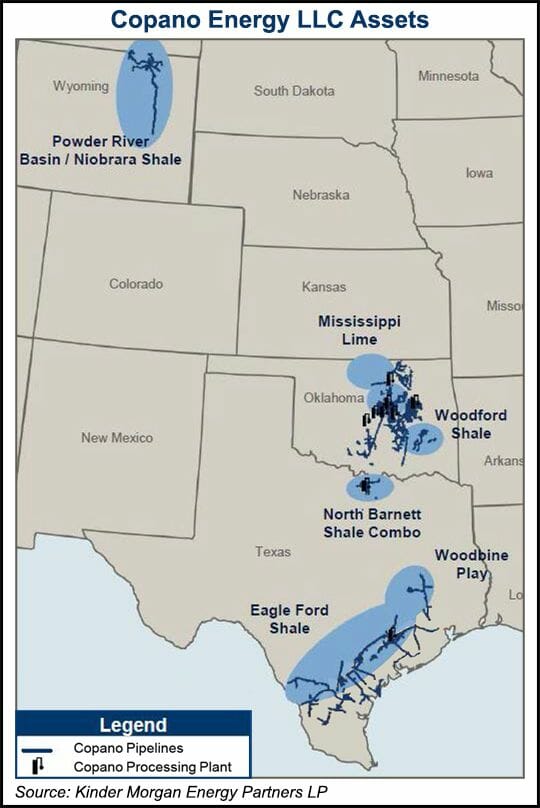 The deal is worth $5 billion, including debt. Copano is active mainly in Texas, Oklahoma and Wyoming and has been a joint venture (JV) partner with KMP in the Eagle Ford.

Copano is “a company that we know very well and have partnered with through the years, [and] this transaction will enable us to significantly expand our midstream services footprint,” said KMP CEO Richard D. Kinder. “As a result of this acquisition, we will be able to pursue incremental development in the Eagle Ford Shale play in south Texas, gain entry into the Barnett Shale Combo in North Texas and the Mississippi Lime and Woodford shales in Oklahoma.

“We continue to be bullish on the domestic shale plays and believe they will drive substantial future growth at KMP. Copano’s assets are very complementary to ours as KMP is principally a pipeline transportation and storage company, while Copano is primarily a fee-based gathering, processing and fractionation player.”

The deal, which has been approved by the boards of directors of both companies, will be a 100% unit-for-unit transaction with an exchange ratio of 0.4563 KMP units per Copano unit. The consideration to be received by Copano unitholders is valued at $40.91 per Copano common unit based on KMP’s closing price as of Jan. 29. It represents a 23.5% premium to Copano’s close on Jan. 29. The transaction, which is expected to close in the third quarter of 2013, is subject to customary conditions, including regulatory approval and a vote of the Copano unitholders. TPG, Copano’s largest unitholder, which owns more than 14% of its outstanding equity (see Daily GPI, July 23, 2010), has agreed to support the tie-up, KMP said.

“The biggest single handicap to that development is making sure that we have adequate infrastructure to serve the additional supply that’s coming online and connect it to the additional demand…All of this requires more infrastructure, and that’s what we’re here to provide. We have a great deal of it, and we will continue expand and grow with the market.”

In Texas, Copano serves producers in the Eagle Ford as well as the Barnett Shale Combo play and the Woodbine in the Upper Gulf Coast. In Oklahoma the company gathers and processes gas in the central and eastern portions of the state, serving the Mississippian Lime and the Hunton Dewatering play. In the Rockies it gathers and treats coalbed methane gas in northeast Wyoming and has the potential to serve production from the Niobrara formation, KMP said.

“Through this transaction, Copano will become part of a larger, investment-grade organization with stable cash flows and the financial resources to fund our increasing number of high-return growth projects,” said Copano CEO R. Bruce Northcutt.

Copano has about $1 billion worth of identified growth projects over the next three years. Most of them are focused on the Eagle Ford, but there are some processing expansions pegged for Oklahoma.

“Given the growth in cash flow that will come from the projects already in progress with existing customer commitments, we expect the multiple of EBITDA [earnings before interest, taxes, depreciation, and amortization] paid for Copano to decline to the very low double digits over the next few years, and considering the growth opportunities beyond that, we expect continued attractive EBITDA growth from these assets thereafter.”

The deal is expected to be accretive to cash available for distribution to KMP unitholders upon closing. The general partner of KMP, Kinder Morgan Inc. (KMI), agreed to forgo a portion of its incremental incentive distributions in 2013 in an amount dependent on the time of closing. Additionally, KMI intends to forgo $120 million in 2014, $120 million in 2015, $110 million in 2016 and annual amounts thereafter decreasing by $5 million per year from this level. The transaction is expected to be modestly accretive to KMP in 2013, given the partial year, and about 10 cents/unit accretive for at least the next five years beginning in 2014, KMP said.

“Copano’s cash flow is largely and increasingly fee-based, and our accretion projections are based on commodity prices consistent with the current forward curve for the portion that is sensitive to commodity prices,” Kinder said.

The acquisition will be immediately accretive to KMI’s cash available to pay dividends, even after KMI forgoes a portion of the incremental incentive distributions, KMP said. The increase in KMI’s cash available to pay dividends (net of the amounts voluntarily foregone) is expected to be about $25 million in 2014 growing to about $70 million in 2016.

Copano is headquartered in Houston and has a significant office in Tulsa, OK, which KMP intends to maintain. Most of Copano’s 415 employees are expected to be retained, Kinder said.

Upon closing, KMP will own 100% of Eagle Ford Gathering (currently a JV with Copano), which provides gathering, transportation and processing services to natural gas producers in the Eagle Ford Shale (see Shale Daily, July 5, 2011). Eagle Ford Gathering comprises approximately 400 miles of pipelines (including its capacity rights in certain KMP pipelines) with capacity to gather and process more than 700,000 MMBtu/day.