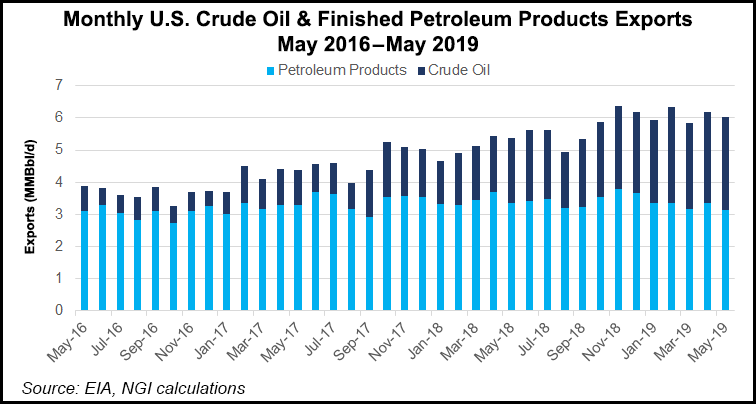 The Houston-based operator has a slew of oil and natural gas projects on the drawing board, many of which are tied to growing output from the Permian Basin. Kinder Morgan has a liquids terminal platform on the HSC that now includes 10 ship docks, 38 barge spots, 20 inbound pipelines with connectivity to 10 regional refineries/chemical plants, as well as 15 outbound pipelines, 14 cross-channel lines and about 43 million bbl of storage.

The enhancements are designed to help customers “maximize storage and blending economics, and access domestic and global energy markets in the most cost effective manner possible,” said Kinder’s John Schlosser, president of Terminals.

About $125 million is earmarked for the Pasadena Terminal and Jefferson Street Truck Rack. Planned enhancements include increased flow rates on inbound pipeline connections and outbound dock lines to reduce vessel load times and expand effective dock capacity. Tank modifications also are being eyed to allow butane blending and vapor combustion for the 10 storage tanks, with an option to extend the modifications to another 25 tanks or more.

In addition, the methyl tert-butyl ether (MTBE) storage and blending platform is to be updated at the Pasadena facility, with a dedicated cross-channel MTBE line planned to serve vessels loaded at the North Docks. A dedicated natural gasoline (C5) inbound connection also is in the works to expand blendstock supply optionality and liquidity.

The improvements, Kinder said, are expected to be completed by mid-2020. They are supported by a long-term agreement with an undisclosed refiner for about 2 million bbl of refined petroleum products storage capacity at the terminal.

In addition to the enhancements at the Pasadena Terminal, Kinder plans to invest more than $45 million to develop and construct a butane-on-demand blending system for 25 tanks at its Galena Park Terminal. Construction of a 30,000 bbl butane sphere is planned, along with an inbound butane (C4) pipeline connection, as well as tank and piping modifications to extend butane blending capabilities to 25 tanks, two ship docks and six cross-channel pipelines.

The Galena Park project, Kinder noted, is scheduled for completion by late 2020 and also is supported by a long-term agreement with an undisclosed “investment grade midstream company.”