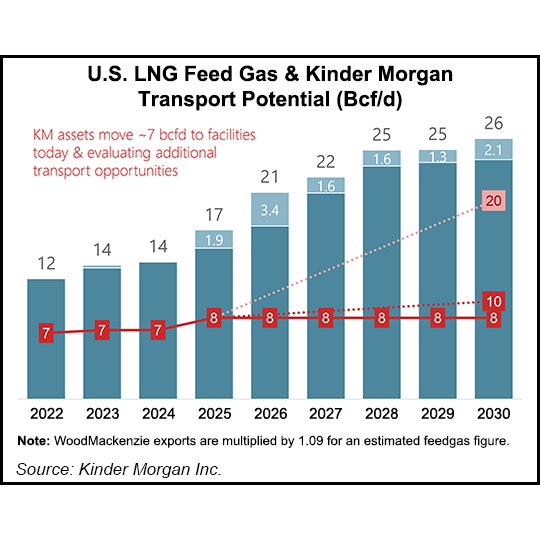 In a call with investors to discuss 4Q2022 earnings earlier this month, CEO Steven Kean said Kinder is moving forward with the $678 million Evangeline Pass project after receiving credit support from Venture Global to proceed with construction.

The two-phase project includes modifications and enhancements to the Tennessee Gas Pipeline and Southern Natural Gas Co. systems in Mississippi and Louisiana.

The pipeline in-service dates would be aligned with Venture Global LNG’s dates for the Plaquemines liquefied natural gas export terminal. Venture Global  estimates one-half of capacity for the first phase of the project – 13.33 million metric tons/year – could come online in 2024, followed by the second half by the end of 2025.

Kean said the proximity of Kinder’s midstream network throughout Texas and Louisiana provides the Houston-based company a “great advantage” in the LNG sector. Specifically, he said Kinder’s access to multiple production basins, along with reservoir and salt storage, puts it in a “great position to participate in the LNG export story.

“We’ve talked about 50% as being our market share” when it comes to moving natural gas to LNG facilities, Kean said. “That’s where we are today. We definitely believe our volumes are going to continue to grow, but it’s hard to call balls and strikes whether we’re going to meet or exceed 50% going forward. But I feel really good about our position to participate in that.”

Along that front, construction is underway on the 550 MMcf/d expansion of the Permian Highway Pipeline (PHP), which is set to ramp by November. However, management said there is a “potential opportunity” for an earlier in-service. Using additional compression, deliveries from the Waha area of West Texas would move more supply to mainline connections to Gulf Coast markets.

Kinder in 2022 began commercial discussions to expand another Permian Basin gas pipeline, the Gulf Coast Express. However, an open season “hasn’t been very active,” Kean said, “although with lower prices now, there may be some opportunities there.”

Kean said “fuel cost was a bit of a headwind for us on that expansion project.” With gas prices in the sub-$4.00 range, “that may bring that one more into actional opportunity.”

Based on conversations with customers, the need for incremental capacity from the Permian may be late 2026 or early 2027, according to Kean. “The overall market still needs that capacity,” he said. However, the task is determining when and where the volumes will be needed.

The 4% year/year increase was driven by stronger demand from power generation and local distribution companies, as a result of weather and coal retirements, partially offset by lower LNG volumes from Freeport LNG. Freeport has been shut since last June. Softer exports to Mexico also weighed on transportation volumes, according to Dang.

Natural gas gathering volumes were up 6% in 4Q2022, driven by Haynesville Shale volumes, which were up 44% year/year.

Although volumes were flat sequentially on the KinderHawk gathering system in the Haynesville because of capacity constraints, management expects “a nice uplift as we head into 2023.” Kean said some capital would be targeted towarding debottlenecking the gathering system, but management also sees “some nice interstate rate increase and utilization opportunities as we go forward.”

Kinder’s Energy Transition Ventures business unit has set its sights on the Permian for a carbon capture project, which would be one of several on the table by other companies. Kinder executed a term sheet with Red Cedar Gathering Co. to provide transportation on Kinder’s carbon dioxide (CO2) pipelines and sequester the emissions at an existing Class II injection well.

Red Cedar also has a project in the works to capture CO2 from two natural gas treating facilities in southern Colorado for up to 400,000 metric tons/year. It would deliver the captured CO2 to Kinder’s Cortez pipeline in New Mexico. Red Cedar is a joint venture between the Southern Ute Indian Tribe Growth Fund (51%) and Kinder (49%).

Commissioning also is set to begin at the Twin Bridges Landfill by the end of March, with construction ongoing at the Prairie View and Liberty landfills. The three renewable natural gas (RNG) facilities were part of the assets acquired from Kinetrex Energy in 2021. The sites are expected to be placed in service this year.

Kinder also is beginning construction this month to convert Autumn Hills, one of seven sites included in its acquisition of North American Natural Resources Inc., to an RNG facility.

Meanwhile, Kean is set to retire on Aug. 1, but he would remain a board member. Dang has been tapped as CEO. Kean, who has been CEO for eight years, said he looked forward to “having the flexibility to undertake work in other areas of interest to me in the future.” He said “the best is yet to come” for the midstream company and expressed his support for Dang.