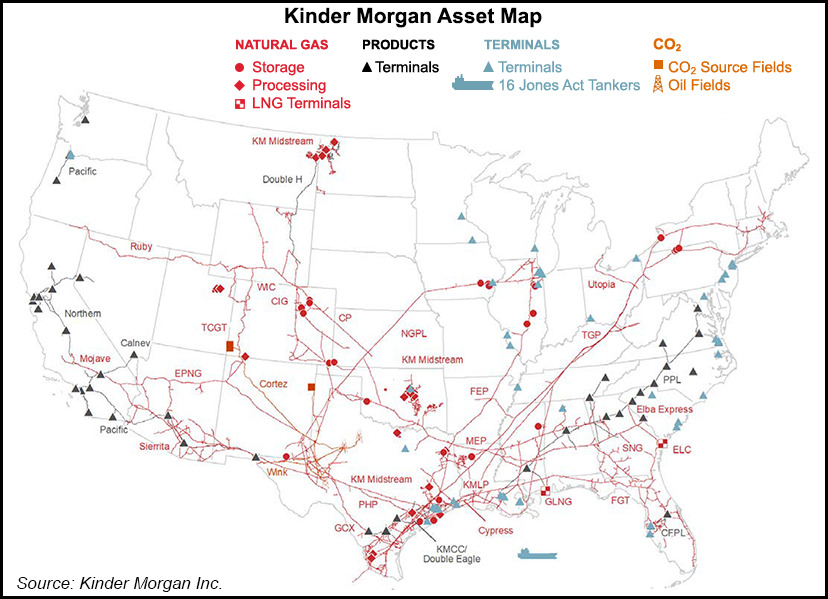 Kean joined other members of the executive team to discuss with investors the third quarter results. Kean said the additional natural gas delivery capability is needed, particularly as supply has tightened and commodity prices have risen.

This has resulted in a greater valuation on being able to deliver gas when needed, he said. Taking into account the increase in intermittent resources in the generation stack and the not-too-distant memory of Winter Storm Uri’s impact on generation, he said, “we think that that’s going to be attractive.”

Kean shared a similar message when Kinder last summer agreed to pay $1 billion for the Stagecoach storage and pipeline assets from a joint venture between Crestwood Equity Partners LP and Consolidated Edison Inc. Since then, Kinder has signed up incremental business and secured rate increases for its storage assets.

Deliveries to power plants took a modest hit during the third quarter because of the higher prices. However, it was “certainly not what we had seen in prior years,” said Kinder’s Tom Martin, president of Carbon Dioxide and Energy Transition Ventures. “A lot of that has to do with coal retirements and just the need to backfill renewable power on an interim basis.”

Is Production Growth On The Way?

As for supply, “producers are working on it,” according to Kean. Still, gas output, he said, hasn’t come back as quickly as it did when the market emerged from the 2015-2016 financial downturn.

Conversations with exploration and production customers have become “a lot more lively,” though, and management expects the supply picture to improve, albeit at a slower pace.

Kean noted that publicly traded producers continue to be “exceedingly disciplined” about bringing back volumes. “They’re enjoying the higher prices, but not responding as much out of concern about capital discipline.”

About half of the rigs in the Permian Basin now are owned by private players, and the overall outlook in the Permian is positive. Kinder also is starting to hear “a little bit more” from exploration and production (E&P) companies about the need for another pipeline. “They don’t need it now, but their time frame on when it might be needed out of the Permian has moved up a bit.”

Kinder in 2019 began commercial discussions for Permian Pass, which would have been its third gas pipeline to move gas south from West Texas. The discussions began before Covid-19, which led to E&Ps further tightening capital expenditures.

Though current discussions about further gas takeaway “are very advanced,” Kean said “need” and “contract signatures” can sometimes be two different things and occur at different points in time. “We’ll see whether the real commitment demand is there” over the next year or so. Early indications point to another pipeline coming online in the basin around 2024, according to the CEO.

Incremental takeaway capacity also could be needed in the 2025-2028 time frame in the Haynesville Shale, Martin said. Kinder reported an 8% sequential increase in natural gas gathering volumes in the play during the third quarter.

Meanwhile, activity also is picking up in the Bakken Shale for natural gas and oil. Though at a slower pace than expected, rigs are running and wells are being placed online. Kinder management sees “robust growth opportunity for those assets.”

Liquefied natural gas (LNG) demand, along with pipeline exports to Mexico, should drive much of the growth for the natural gas business in the years to come. The midstreamer has a roughly 50% market share on deliveries to LNG facilities. Discussions also are underway for additional capacity.

Kinder transported an average of 5.1 million Dth/d during the third quarter, up 3.3 million Dth/d from a year ago when Covid-19-induced lockdowns resulted in dozens of U.S. LNG cargo cancellations.

Kean noted an increased interest among LNG customers in the overall carbon content of the super-chilled fuel. On this front, Kinder has completed three transactions to date in which it fetched a premium for transporting gas that was certified. Companies are making deals to ensure their gas supply is less carbon intensive using various branding that is called responsibly sourced gas, or RSG, or differentiated.

Last month, subsidiary Tennessee Gas Pipeline and Southwestern Energy Co. signed a deal to move certified Appalachia gas supply to the Northeast beginning in November. The agreement is one of several certification initiatives underway for the midstream company.

Other efforts to lower emissions may take a bit longer, however.

Though 69% of Kinder’s backlog supports low carbon infrastructure, including natural gas, executives pointed out that carbon capture projects take time to develop. Permitting, financing and infrastructure are some of the factors that have to be considered, according to Kean. There are some opportunities to repurpose some pipelines, but overall, “it’s not a tomorrow thing. It’s probably not a next year thing. It’s going to take a little bit of time to develop, but we are in active conversations.”

The CEO said carbon capture and sequestration is “going to have to be part of the picture” if climate objectives are going to be met over the long term. However, Kean attempted to set the expectations for investors “at a rational level of how quickly we think that’s likely to unfold and where we think the first projects get done.”

Kinder last month announced that it was partnering with Neste to create a raw material and logistics hub at its Harvey, LA, terminal by modifying existing tanks and piping. The company also acquired Kinetrex Energy, which has a 50% interest in a landfill-based renewable natural gas facility in Indiana and commercial agreements for three more.

“There is a focus on our existing network, but we have had discussions with people off the network about the potential to capture and sequester carbon,” Kean said.

Meanwhile, Kinder’s Products Pipelines reported total refined products volumes were up 12% year/year in 3Q2021, with crude and condensate volumes down 7%. Gasoline volumes were above the comparable period last year by 9%, while diesel volumes were up by 2%. Jet fuel volumes continued to rebound, up 56% versus 3Q2020. Compared to pre-pandemic levels, using the third quarter of 2019 as a reference point, road fuels (gasoline and diesel) were down 3% in 3Q2021, while jet fuel was off about 21%.

“While the emergence of the Delta variant during third quarter 2021 had a negative effect on volumes, we would expect that effect to diminish in the fourth quarter,” President Kim Dang said.

In the carbon dioxide segment, volumes were about 5% lower year/year during the third quarter, according to Dang. Crude volumes slipped 6%.