The Interior Department’s Bureau of Land Management (BLM) said Kinder Morgan Inc., citing oil prices, has withdrawn its right-of-way application for the Lobos Pipeline, a 216-mile carbon dioxide (CO2) pipeline that would have traversed New Mexico and served producers in the Permian Basin. 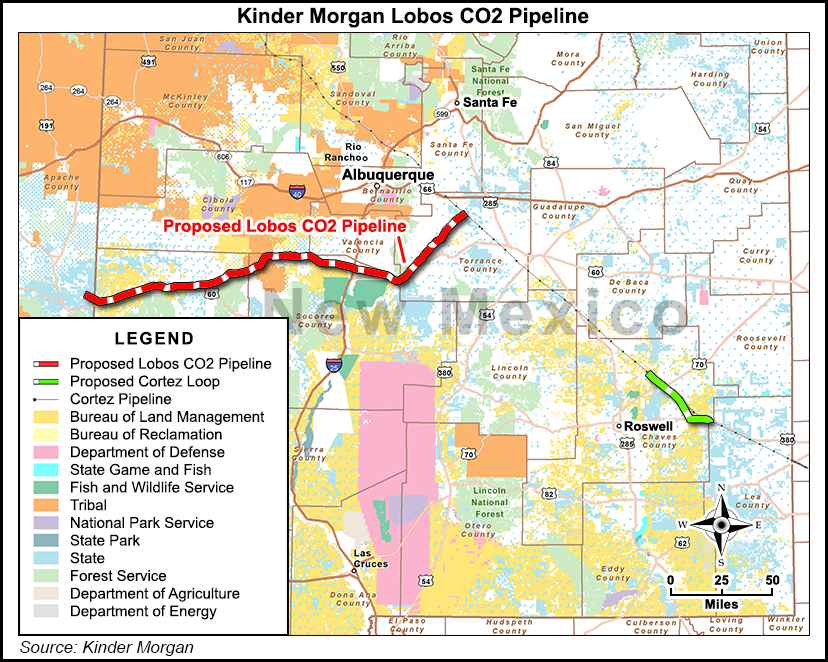 The Lobos Pipeline would have had an initial capacity of 300 MMcf/d, originating at the company’s St. Johns Field in Apache County, AZ, and terminating at an interconnection with another CO2 pipeline owned by Kinder Morgan, the Cortez Pipeline, in Torrance County, NM (see Shale Daily, March 26, 2014). Lobos would have supported enhanced oil recovery (EOR) projects owned by Kinder Morgan and other operators in the Permian Basin of West Texas and eastern New Mexico.

“According to Kinder Morgan, the project timing is being reassessed because of current market conditions related to the significant decline in oil prices,” the BLM said Wednesday. “Kinder Morgan states it will continue to re-evaluate the timing of its planned investment to develop the St. Johns source field and construction of the Lobos Pipeline, as well as the related expansion of the southern portion of the Cortez Pipeline to accommodate future required CO2 capacity from the St. Johns field.”

The BLM said it is no longer processing the company’s original application for a right-of-way grant and added that Kinder Morgan would have to file a new application if it decides to proceed with the project. A new application would also trigger a new National Environmental Policy Act review by the BLM.

According to a Jan. 28 presentation by Jesse Arenivas, president of Kinder Morgan’s CO2 business, the division’s budget for capital expenditures (capex) for 2015 was reduced from $1.24 billion to $978 million, with the sales and transportation unit receiving $454 million (47%). The unit’s projects included developing the St. Johns Field and the Lobos Pipeline.